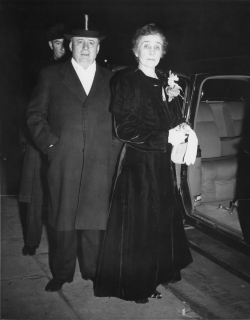 Known for his poor driving skills, either due to limited vision in his later years or his general inability to maintain a steady course on the road, “Mr. Sam” wasn’t the best driver in the county. Good constituents on the sidewalks in his hometown of Bonham may have needed to clear a path when Rayburn came to town.

His ranch in Ivanhoe was another matter. There were no stop signs or yellow and white lines, just open space occasionally blocked by a fence or gate. The pastures and the fields were the Speaker’s own domain and where he tended to do the most damage to his vehicles. It was here that Rayburn could be found bouncing over potholes, ruts, and ditches. And maybe, just maybe, a fence post or small tree would jump in his way.

In 1955, Sam Rayburn’s sister Lucinda Rayburn, known to most as “Miss Lou,” allowed her brother to borrow her vehicle for one of these regular trips to the Ivanhoe ranch. Unfortunately, her brother did not take care of the loaned car. He more or less ruined the vehicle during an extremely bumpy ride through the pasture.

After returning home to Bonham with his sister’s damaged car, Rayburn placed a call to his good friend Lee Morrow, owner of the Yates and Morrow Co., a Dodge and Plymouth dealership in Bonham formerly located just off the downtown square. He asked Lee if he had a car on the lot that would be appropriate for Lucinda. Lee said he did, and suggested that Rayburn purchase a car that had air conditioning for Miss Lou’s comfort. Rayburn dismissed the suggestion, noting that he did not care for air conditioning. 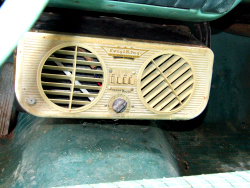 The next morning, Rayburn went to the dealership and paid for a brand new, 1955 Plymouth Savoy. The total cost of the car was $2,250 (including the tax and licensing fees). He presented the new vehicle to his sister. Lucinda liked the new, two-tone turquoise-colored Plymouth well enough, but she did not like the fact that it did not include air conditioning. Realizing his mistake, Rayburn relented and had a FrigiKing air conditioner mounted beneath the dashboard in the sedan. As the brother and sister walked out to see the newly air-conditioned Savoy, Rayburn remarked to his sister, “Now Lou, I’ve air conditioned your car, but don’t ask me to air condition the walk to the car, because I’m not going to do it.”

Lucinda Rayburn drove the car until her death in 1956. Afterwards, Mr. Sam drove it some, adding a dent and a scratch here and there along the way. With the Speaker’s death in 1961, another Rayburn sister, Medibel Bartley, began driving the Savoy. Following Mrs. Bartley’s death in 1969, the Rayburn family estate sold the car. Buster Cole, Sam Rayburn’s attorney and board member of the Sam Rayburn Foundation, purchased the car for his daughter, Carmen, who used it at college. She later sold the car to her brother David Cole, who donated the Savoy to the Sam Rayburn House Museum in 1974.

For many years, the Savoy sat in the partially enclosed tractor shed on the grounds of the Sam Rayburn House site. It could be seen on tours alongside Sam Rayburn’s much-loved and much-dented 1951 Dodge truck. In 2015–16, thanks to a generous donation by John L. Nau, III, chairman of the Texas Historical Commission and CEO of Silver Eagle Distributors, Rayburn’s Plymouth Savoy and Dodge truck were restored very closely to their original 1951–1961 appearance. Today, the vehicles are on display along with Rayburn’s recently donated 1953 Chevrolet sedan in the newly restored 1950s-era barn at the Sam Rayburn House. The barn includes updated electricity with heating, cooling, and alarm systems.

You can be one of the first to view the newly restored Savoy and other vehicles, including Rayburn’s restored 1948 Farmall tractor, during a free open house on Saturday, October 29 from 1–3:30 p.m. We hope you will join us!