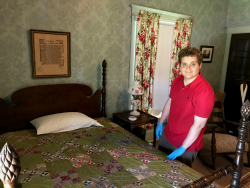 The quilting work on this piece is one of considerably high quality. It was probably a display piece or the cover on a bed—most likely the latter due to the extremely thick batting for warmth. This quilt shows classic complex “Nine Block” and irregular Baptist Fan stitching patterns. The Nine Block pattern employs nine half- squares, alternating between true “Nine Block” squares and patterned green fabric. The Nine Block squares employ 18 half squares, alternating between the dominant sky-blue color and red and white secondary tones. They are arranged in a variation of the “X-Cross” Nine Block pattern. All pieces are patterned; no fabric is plain, though most have the dominant colors red, blue, white, or green. Repair patches along the back suggest that the quilt was extremely important to the owners.

The cotton quilt was probably made around 1900, based on its general condition. It was likely made somewhere in the American South, based on the use of an irregular Baptist Fan pattern that was common during this period. Little is known about the actual history of the quilt, although it is notable that the batting includes raw cotton seeds. 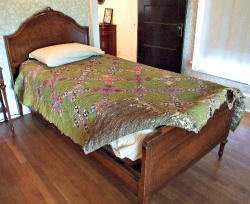 Melanie Sanford, a local textile conservator, recently stabilized this quilt, which was almost falling apart due to its age. Conservation was done in five steps. First, Sanford cleaned the quilt by removing dust with a vacuum. Next, she reinforced the back with brown netting. Then, she overlaid the top and bottom sashing alongside several damaged blocks in the center of the quilt with sheer netting fabric. Finally, she removed the accession tag (a tag with an identification number that is placed on all artifacts for archival purposes) and replaced it on the newly added netting.

This quilt will be on display as part of the annual Bonham Quilt Hop, which includes the Sam Rayburn House State Historic Site and takes place on Friday, July 28 from 1–4 p.m. and Saturday July 29 from 9 a.m. to 4 p.m. Other fine historic quilts will be on display at the site, including some from the Rayburn collection and one from the THC’s Eisenhower Birthplace State Historic Site in Denison. The free event will include quilt-themed tours and activities for children.