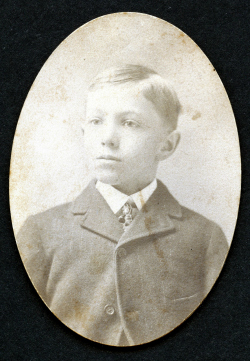 2017 marks the centennial of the U.S. entry into World War I. Like many other historic sites, museums, and organizations across Texas, Sam Rayburn House State Historic Site will honor those who served in the war over the next two years.

The Rayburn family is intrinsically linked to World War I through Sam Rayburn, who was serving in Congress at the time and voted to enter World War I on April 6, 1917. But did you know another family member served in the U.S. Army Air Force during the Great War?

George Atkins was born on December 5, 1890 in Ouray, Colorado, a small mining town on the western side of the state. His parents, Mark and Nina Atkins, married in 1888. George was quite young when his father Mark passed away. His mother, Nina, met and married one of Sam Rayburn’s brothers, Dr. John Franklin Rayburn. The couple married in 1900 when George was 10 years old.

U.S. census records from 1910 list Dr. John Rayburn, his wife Nina, and step-son George all living together in Bonham. There was one other occupant of the home: Dr. Rayburn’s brother, Sam Rayburn. Sam was closer in age to his brother’s step-son, George. The two were separated by only eight years, while Sam and brother John were 13 years apart.

George grew up in Bonham, graduated from high school, attended Baylor University in Waco, and graduated with a bachelor’s degree. When his Uncle Sam Rayburn, like so many other congressmen, voted in favor of going to war with Germany in 1917, George’s fate was sealed. With the Selective Service Act of 1917, men between the ages of 21 and 30 were required to register for the draft. George registered on June 5, 1917, as did his uncle Tom Rayburn, who was 30 at the time. In 1918, the draft age was extended to men between the ages of 18 and 45. Therefore, his Rayburn step-uncles Dick, Jim, and “Mr. Sam” all registered as well, though they were never drafted into military service.

George enlisted in the U.S. Army on November 30, 1917. He was assigned to the Army Air Force, 197th Aero Squadron, later renamed Squadron “D” at Love Field in Dallas. During World War I, pilots received basic training at Love Field before being shipped to other locales for specialized training. George’s rank was a Chauffeur Mechanic, which meant he was responsible for driving a car and conducting maintenance on it. He was promoted to a Private First Class with the 197th Aero Squadron in March 1918. His interest seems to have been in becoming a pilot, which is why he was transferred to the School of Military Aeronautics at Berkley, California, in September 1918 to undergo training. He was honorably discharged from the Army Air Force on December 10, 1918 according to his military record, though no reason is given.

On March 1, 1918, while still in service with the 197th Aero Squadron, George wrote a letter to Sam Rayburn’s mother, Martha. He addressed the letter to “Grandmother Rayburn.”  In the letter, he wrote:

We have a muddy field today and no flying, so I’m now in the ‘Y’ enjoying a little rest and talking to my friends. We are to have better pass arrangements from now on, and if my squadron does not leave for France, I’m going to get to come home once in a while I think. Perhaps we will be here for a while yet—I hope so. America herself will stand in wonder someday if the ‘ships’ go as planned. Berlin is due to get hers.

After leaving the military, George returned home to Bonham where he was hired as the Principal of Bonham High School. He was next appointed the Bonham postmaster, where he worked from 1941 until his retirement in 1952.

George Atkins died in 1968 and was buried in Willow Wild Cemetery near his mother Nina, step-father Dr. John Rayburn, and step-uncle Sam Rayburn.

The oval-shaped, yellowed photograph of George Atkins, circa 1900, is one of the few artifacts in the Sam Rayburn House collection directly connected to this man and his service to our country. Look for future blog posts about World War I and Sam Rayburn over the next two years as we honor those who served during this historic conflict.