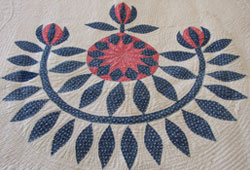 Originally found in a storage chest amongst other Rayburn possessions, the Prairie Rose trapunto-style quilt is likely one of the most precious of the family’s quilt collection. The dating of the quilt goes back to 1850—likely making it a possession that Mr. Sam and his siblings inherited from their parents. Hand-pieced and hand-quilted, the Prairie Rose quilt demonstrates a high level of skill and design consideration. Rather than being formed in block style, the tradition of most American and European quilting techniques, the quilt pieces are shaped organically around the pattern of the prairie rose flowers and shaped into a faux-block using the cotton-stuffed trapunto leaf vines in the base color, connecting the pattern blocks and adorning the corners. The colored segment of the pattern is enhanced by using a famous shade of red muslin—Turkey red—and the blue fashion fabric adorned with tiny white stars; it forms a semicircular pattern of three buds and one flower, surrounded by a total of 27 leaves, repeated nine times.

Quilting, the act of joining together two layers of fabric with batting or filler between them, dates back as far as ancient Egypt and China. It is thought to have spread from Asia to Europe during the 11th through 13th centuries, with some of the earliest European examples being bedcovers and clothing such as jackets and padding for armor. By the 1600s, quilted clothing had become commonplace and decorative quilted bedcovers were a sign of affluence in Europe. Early settlers and immigrants brought quilting traditions to America, where it flourished as designs and techniques evolved during the 19th and 20th centuries.

Turkey red, one of the colors used in the quilt’s color pattern, was created through a dyeing process developed in the Middle East. “Turkey” referred to the old European idea that all Mediterranean countries were part of Turkey, and therefore the red produced by this technique was dubbed Turkey red. The ”Turkish” secret of dyeing the fabric became known in Europe in the 1750s, after which many companies were able to reproduce the Turkey red color for their fabrics. Trapunto, a quilting technique almost as old as that of producing Turkey red dye, originated in Italy before the 14th century. Also known as “stuffed technique,” a trapunto design on the quilt’s surface is raised by stuffing a closely stitched design with a filler of either wadding or yarn in the middle of the layers of fabric between stitches. 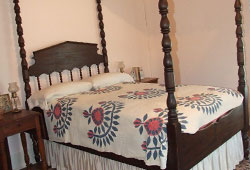 Interesting elements to the development of this quilt include its backing, batting, and binding. Backing, or the bottom layer that rested on a surface, was usually undecorated and of a plain, lower-quality fabric. In the case of this quilt, the backing actually shows evidence of the trapunto decoration, adding a layer of additional fanciness. Batting, the filler layer of the quilt, is made from soft and fluffy materials that provide extra warmth. It’s held in place between the decorated top layer and the back layer of the quilt by using quilting stitches, tight stitches that pass through all layers to secure the material in its place. Although commercial batting was available at the time this quilt was made, materials like raw cotton and recycled materials such as old clothes and flour sacks were much cheaper and continued to be used in quilt-making. In the case of this quilt, raw cotton was used, as it was commonly utilized as batting in rural areas.

Binding refers specifically to the edging of a quilt and how the inner batting layer was prevented from falling out. In this quilt, the front layer was actually turned under and sewn into the backing, allowing for both the stitches and the folded material to prevent the cotton liner from escaping the quilt.

The Prairie Rose trapunto quilt along with others will be on display at the Sam Rayburn House during the Bonham Quilt Hop on Friday, July 29, from 1–4:30 p.m., and Saturday, July 30, from 9 a.m.–4p.m. Visitors can view many more quilts while taking guided tours of the house, and 1870s quilts from the Varner-Hogg Plantation State Historic Site in West Columbia will be on display in the site’s visitors center. Join us in Bonham for this fun, informative, and free two-day special event to see a multitude of quilts and enjoy the activities.