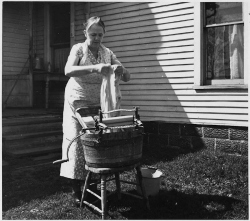 What do you do if you have an important meeting coming up, but all your clothes are dirty? What if the electricity is out and you have no running water in your home?

In 2016, your response is probably, “Well, obviously I’d take a load of laundry to the local laundromat.” If you have the money to spare (but no time), you might say, “I’d make a trip to Target and buy some new clothes.” But, what if it was 1916 and you lived in rural North Texas and there was no laundromat? Even worse, what if there was no Target? If you were in Sam Rayburn’s family, you’d likely trudge to the well, pump water into a bucket, haul the water back to the house, light a fire in the stove, heat up your water, grab a bar of lye soap, and start scrubbing your dirty laundry using a washboard. Sounds like a lot of work compared to throwing the laundry into the washing machine and popping in a few quarters, doesn’t it?

That was the way of life for the Rayburns at their Bonham home. When first constructed in 1916, the house had neither running water nor electricity. The women of the home were typically tasked with undertaking cooking and household chores. Laundry was one of those chores that never seemed to end. The job of hauling water, heating water, scrubbing laundry, wringing it, hanging it to dry, ironing it, and folding it could take a whole day or multiple days. That job likely went to Sam’s unmarried sister Lucinda and his mother Martha, who was age 70 at the time the home was built). The family may have hired help on laundry day. Documentation at the Sam Rayburn House does not list a full time servant or cook at the Rayburn farm until the 1930s.

By 1917, the family did have running water in their home, which would have made laundry day a bit easier. However, they did not have electricity in their home until 1935, so they still were forced to heat water on the stovetop on laundry day to be able to properly launder their clothing. According to Barbara Ross, granddaughter to longtime Rayburn cook Bobbie Phillips, her grandmother began doing the laundry at the Rayburn home in 1939. The job was done on the back porch, sometimes called the mud room. Rayburn’s great nephew Buck Bartley recalled seeing a clothesline in the Rayburn’s backyard and photos of a clothesline can be seen in 1970s-era photos of the men’s sleeping porch. 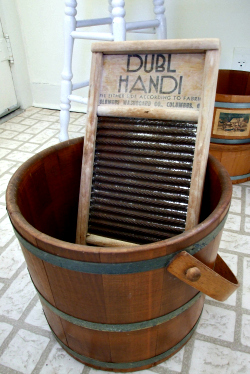 For much of Sam Rayburn’s life, the washboard was an integral part of every wash day. The washboard came into common use in the American home beginning in the early 19th century. The version in the Sam Rayburn House State Historic Site’s collection was made by the Columbus Washboard Company, which began selling their wares in 1895. This washboard, the Dubl Handi model, was developed between 1931 and 1938 and is still on the market in 2016. It is the mid-sized washboard, the company’s “pail” version, which is 18 inches in height. It was especially made for washing delicates, hosiery and handkerchiefs. Today, Columbus Washboard Company is the lone surviving manufacturer of washboards in the U.S.

The washboard has a wood frame and a metal, rippled board for scrubbing the laundry. A wood frame at the top of the board provides a resting place for the user’s bar of lye soap. Wood legs helped to prop the board up in a tub or pail of soapy water.

When the THC took ownership of the Rayburn home in the early 1970s, the Rayburn’s washboard was found on a shelf inside the pantry. It was likely tucked away and only used sporadically after the Rayburns purchased a washing machine sometime after 1935 and laundry day became a whole lot easier.

The Rayburn’s washboard will be on display as part of a new exhibit at the Sam Rayburn House State Historic Site. The new, permanent exhibit will feature historic photos, a digital photo frame, interactive components, and a short film. It opens on December 10 as part of the site’s Holiday Open House and 100-year birthday celebration (1916–2016) from 10 a.m. to 3 p.m. that day.