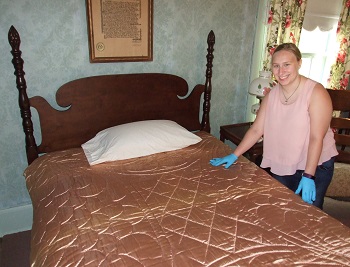 With Bonham’s annual Quilt Hop fast approaching, we are putting a spotlight on a quilt we have here at the Sam Rayburn House State Historic Site—the Wholecloth “Boudoir” Quilt. Handmade from rayon satin and beautifully designed in the reversible pastel colors of light green and light peach, it is a great example of the Wholecloth quilt pattern, popular between 1925 and 1950. Being a whole cloth pattern, it was decorated solely with quilting stitches rather than piecework or applique.

The center is a diamond pattern encased in a rounded rectangle with each of its four points reaching out toward the corners of the quilt. Reaching toward the rectangle points from each corner are feather shaped tendrils stemming from a club design. Between each corner, are elaborate stacked scales or scallops. While the stitching is the same on both sides of the quilt, one side is entirely light green, the other entirely light peach. This reversible color scheme allows the owner to switch the color during the year or when they want a change while still enjoying the exquisite stitching.

This beautiful quilt was given to Mr. Sam by Mrs. R. E. Risser, formally Amelia Johnson, and handmade sometime between 1940 and 1950. The Risser Family has a long history in Bonham, beginning with Ralph Albert Risser Sr. and his two sons Ralph Albert Risser Jr. and Ross Eugene Risser Sr. operating the R. A. Risser and Co. dry goods business. Ross Eugene Risser, later with Mr. Rush Catron, founded the Southwest Pump Co., which provided many jobs to the people of Bonham over the years.

Upon Ross’ death, the pump was taken over by his son Eugene Risser Jr. and his other son, Dr. Joe Risser, went on to open the Risser Clinic (1956-1971).. Mrs. R.E. Risser, wife of Ross Eugene Risser Sr. and the woman who gave Sam Rayburn this quilt, held a large role in the community alongside her husband and sons.

In 1934, she became President of the Bonham Public Library Board and proposed to the Rotary Club that the public library, the only one in the county at the time, be moved from the third floor of the courthouse to the ground level to make it more accessible to the public. The Rotary Club approved the plan and took it before city leadership.

With the Rayburn and Risser families both being active within the community, it is no surprise that the two families are mentioned together or connected at various times. The most notable connection is that Dr. Joe Risser was the physician to Mr. Sam Rayburn and attended to him at the time of Mr. Rayburn’s death on November 16, 1961. By searching through old newspaper articles from the 1930s and 1940s, we discovered many other connections between the families. 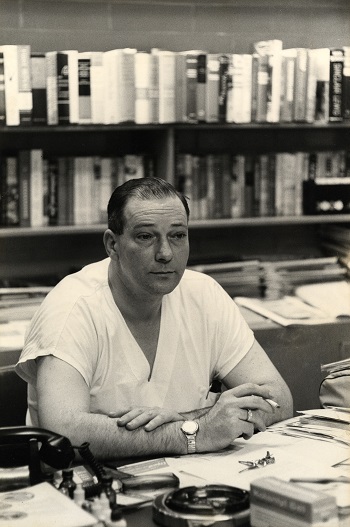 Members of the Risser family and Sam Rayburn served alongside each other on several city and county committees. In 1945, R.E. Risser and Sam Rayburn were both a part of the Industrial and Post War Planning Committee for the Chamber of Commerce and in 1948, Eugene Risser, son of Mr. and Mrs. R.E. Risser and brother of Dr. Joe Risser, served with Mr. Rayburn on city committees to prepare Bonham for the arrival and visit of President Harry S. Truman.

To see this quilt in person along with other Rayburn quilts featuring a variety of colors and patterns, visit the Sam Rayburn House State Historic Site during the Bonham Quilt Hop on Friday, July 27 and Saturday, July 28 from 9 a.m. to 4 p.m. You will get the opportunity to explore the grounds, go on a guided tour of Mr. Rayburn’s house and property, and kids can have fun with exciting activities geared towards them.