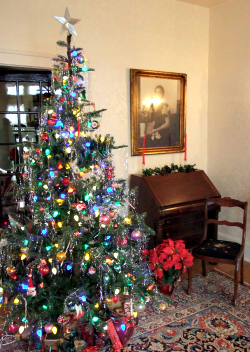 The year was 1916. Woodrow Wilson was president and World War I raged overseas, though the U.S. had not yet entered the fray. Women could not vote in Texas. A progressive movement in matters of labor, immigration, and welfare was changing the American landscape. President Wilson signed legislation establishing both the Boy Scouts and the National Park Service. John D. Rockefeller became the world’s first billionaire.

In 1916, Sam Rayburn’s career continued to move forward in the U.S. House of Representatives. He defeated Andrew Randell of Grayson County to win a third term in Congress. He also was gaining recognition as part of the Committee on Interstate and Foreign Commerce.

1916 was a historic date in Sam Rayburn’s life as it was the year that he and his family moved into their new home on 121 acres of land outside of Bonham. Mr. Sam had initially purchased the land for the home and farm in 1914. By 1916, with construction complete, the family moved into the house. The home’s occupants that year were Sam Rayburn, his father William, mother Martha, sister Lucinda, and brother Tom. Tom was co-owner of the property and acted as the farm’s manager. At that time, the focus of the farm’s economy was milk production from a small herd of Jersey cattle. Cash crops included corn, cotton, and hay. The family also grew oats as feed for both dairy cattle and their horses. Tom and hired workers milked the cattle twice daily, selling the milk to the Kraft cheese factory in Bonham.

Activities on the farm and in the Rayburn home in 1916 were the theme for the 2016 Holiday Open House at the Sam Rayburn House State Historic Site. The event, held on December 10, celebrated the 100th birthday of the Rayburn home. Themed tours of the historic house focused on events from 1916 and how the home has changed over its 100 years. Artifacts displayed in the site’s new exhibit focused on tools of a 1916 home, from grinding coffee beans and mending clothing to lighting the pre-electrified house. 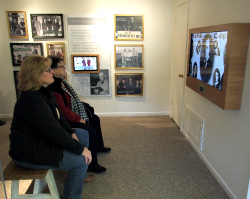 The Holiday Open House also gave visitors the opportunity to check out the site’s new, permanent exhibit located in the visitors center. The exhibit acts as an introduction to Sam Rayburn’s life before visitors tour the historic house. The exhibit includes interactive components such as a desk where visitors can sit, open drawers, explore the contents, and hear Mr. Sam’s voice on a rotary dial phone. Digital photo frames with historic photos and an educational video provide further insight into the life of Mr. Sam.