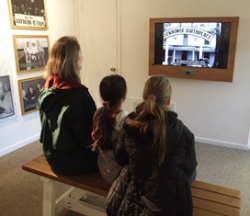 On April 1, staff and visitors of the Sam Rayburn House State Historic Site had two great reasons to celebrate.

The date marked the 42nd anniversary of the site, which originally opened to the public on April 1, 1975. Lady Bird Johnson and former Speaker of the House John McCormack, who were both friends with Sam Rayburn, were on hand for the dedication.

If the anniversary wasn’t reason enough for a party, the site also opened a new, permanent exhibit, “Sam Rayburn: An Uncommon Common Man.” The exhibit was a cooperative endeavor between Sam Rayburn House staff, the THC’s Historic Sites Division, and Split Rock Studios exhibit design firm. It details Rayburn’s life, from his early years as a farm boy to his years spent in the Texas House of Representatives, and through his longtime role in the U.S. House of Representatives. 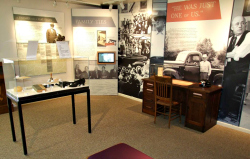 As part of the exhibit, visitors can compare their height to or take a photo with a life-sized, free-standing photo cutout of “Mr. Sam.” A short orientation video tells the story of his life at home in Bonham and his political career. An antique desk, much like the one found in Sam Rayburn’s bedroom, allows visitors to sit down and explore. They can open the desk drawers to find artifacts inside and pick up the rotary phone to listen to Rayburn speaking.

The April 1 open house gave visitors the opportunity to view the new exhibit, take a free, guided tour of the Sam Rayburn House and grounds, and sample delicious refreshments.

Make sure to add the Sam Rayburn House to your summer and fall travel plans, and stop by to view our new, permanent exhibit. Exhibit tours are free.