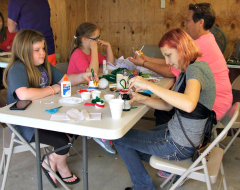 Silver bells, red bows, a bright and festive tree, holly, mistletoe, and poinsettias were all part of the decorations in “Mr. Sam’s” house during the annual Holiday Open House at Sam Rayburn House State Historic Site. With these decorations, Christmas music, and scents of evergreen, pumpkin pie, and sugar cookies, it was time for the party to begin.

Volunteers from the Bonham High School student council helped during the event to make it a success. Along with leading the craft demonstrations, they also assisted with guided, themed tours of the house. 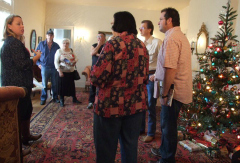 Themed tours during the event focused on the year 1934. The year was significant in the history of the house where Sam Rayburn and his family lived for 53 years. Sam Rayburn’s 1916 home was damaged during a thunderstorm in 1934. Shortly thereafter, the family contracted an architect to remodel the home. The completed remodel resulted in an additional bedroom, two bathrooms, sleeping porch, screened porch, and enlarged bedroom for Mr. Sam. The renovation also included the modification of the home’s front porch from two stories to a one-story, high-ceilinged portico.

After the renovation was completed, the family purchased several new items to decorate the home. The family purchased a settee for the parlor, and Sam’s sister Lucinda picked out a chandelier for the dining room. Additional furnishings arrived as Christmas gifts in 1934, including a coffee table for the parlor and damask drapes for the newly remodeled dining room. Rayburn also purchased a secondhand set of furniture for the newly added guest bedroom.