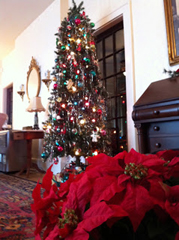 Visitors recently celebrated the holidays along with Sam Rayburn’s birthday at the Sam Rayburn House Museum in Bonham. The theme for the museum’s annual Holiday Open House was “Mr. Sam Comes Home for the Holidays.” The house was festooned with evergreen, mistletoe, poinsettias, candles, and a Christmas tree. The ornaments on the tree and the other holiday trimmings mimicked the traditional décor employed by the Rayburn family.

Other parts of the house appeared as if Rayburn had just arrived home from his hectic life in Washington, D.C. Files were scattered in Rayburn’s bedroom and sitting room, which often served as his office while visiting Bonham.

Rayburn’s bedroom included a multitude of suitcases, hatboxes, and clothing laid upon the bed as if being unpacked and ready to put away into the drawers and chests throughout the room. As guides toured visitors throughout the home, they spoke about the activities at the house surrounding Christmas preparations and Rayburn’s arrival home for the holidays. 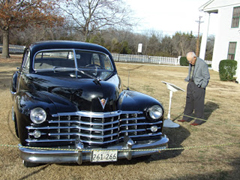 Weeks after the holiday open house, the museum marked another special occasion: Sam Rayburn’s 131st birthday on January 6. The day also marked Sam Rayburn Day in Texas. Initially decreed in 1976 by the late Texas Gov. Dolph Briscoe, the day was set aside to commemorate the life of one of Texas’ most revered and powerful political figures.

In honor of the late Speaker’s birthday, the museum celebrated with free admission and refreshments. One of Rayburn’s favorite foods, chili, was on the menu for the occasion, along with punch and birthday cake.

The Sam Rayburn House Museum is located at 890 W. State Hwy. 56, two miles west of Bonham, in the Texas Lakes Trail Region. It tells the real story of Sam Rayburn, one of the most powerful and influential politicians of the 20th century, in his authentic 1916 home. The site is open for tours Tuesday through Sunday from 9 a.m. to 4:30 p.m.