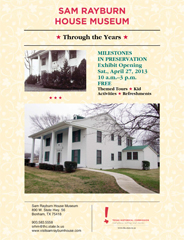 The Sam Rayburn House Museum is the former home of Congressman Sam Rayburn. Rayburn, who was born in Tennessee in 1882 and moved to Texas with his family in 1887, was one of the most significant mid-20th century political figures in the U.S. During his tenure in the U.S. House of Representatives, between 1913 and 1961, Rayburn led the fight in Congress for farm-to-market roads and rural electrification. He supported President Roosevelt’s New Deal programs and multiple parts of World War II legislation that paved the way for Allied victory. Along with his work in Congress, his legacy includes both the Sam Rayburn Library (today known as the Sam Rayburn Museum) and the Sam Rayburn House Museum. Both sites are located in Bonham, his home for 45 years.

Events in the home’s history that are highlighted in the “Through the Years” exhibit include the initial construction of the house in 1916, its transfer and development into a museum in the 1970s, an electrical fire and subsequent repairs in 1997 and 1998, and the recent restoration in 2012. Historic photos and artifacts are on display. 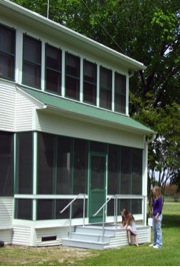 The exhibit opened during a special event on April 27, 2013, during which visitors toured the new exhibit, enjoyed free tours of the house, and sampled refreshments. Activities for children provided a fun way to learn about architecture as they explored the exterior of the house.

The new exhibit is now open in the museum’s visitor center. Admission to the exhibit gallery is free. Stop by the Sam Rayburn House Museum today to check out the new exhibit and take a tour of Sam Rayburn’s favorite place: his home.