Sam Rayburn’s farm was home to more than just members of the Rayburn family. Along with Sam, his sister Lucinda, his brother Tom, and other family, the home served as the residence for two employees: Charlie Phillips, his wife Bobbie, and Bobbie’s young granddaughter, Barbara.

Bobbie, an African American woman, began working as the cook at the Rayburn home as early as 1933. Around 1939, Charlie was hired as the property’s caretaker and assisted with threshing, milking cattle, chopping wood, and other household duties and chores. Charlie lived on the farm in what was known as the caretaker’s cottage. The cottage was built south of the Rayburn’s house in the 1920s to provide a residence for the property’s caretaker. A relationship developed between Charlie and Bobbie, and she moved into the cottage when they married in 1940. 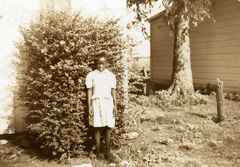 Bobbie had been previously married and had a young granddaughter named Barbara who came to live with them. Barbara attended Booker T. Washington School, an African American school in Bonham. She was often treated to a ride to the school in Mr. Rayburn’s car. Before and after school, Barbara helped her grandmother with a variety of chores. She helped pick and can vegetables, gathered eggs from the chicken house, kept the chickens out of the garden, helped with the washing and ironing, and often went with Lucinda into Bonham on various errands.

Bobbie was beloved by everyone in the Rayburn circle, from family to friends. Charles Langford was a great-nephew to Rayburn. As a young boy, when he and his other Rayburn cousins came for Thanksgiving or Christmas, they would sneak into the kitchen to swipe some turkey before the big family meal. Bobbie chased them away but allowed them to have some cookies as a treat. Family friend Elizabeth Morrow remembered Bobbie as an excellent cook who did not need to measure ingredients for the foods she prepared. She simply threw ingredients together and the meals came out perfectly.

Charlie and Bobbie became an integral part of the social and political scene at the Rayburn home. Bobbie prepared the meals for visiting dignitaries, and both she and Charlie served the meals to guests. The Phillips were both working at the Rayburn home during visits from Lyndon Johnson and President Harry Truman. 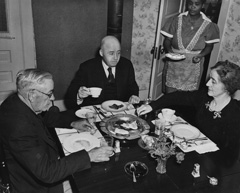 Bobbie became very close to Rayburn’s sister Lucinda, or “Miss Lou” as she was known by many. Both women were mainstays in the household. A letter from Bobbie to Lucinda, who was staying with her brother in Washington, D.C. in January 1945, shows Bobbie’s fondness for the Speaker’s sister. Bobbie wrote, “Oh yes I must say I remember your birthday is Sunday. So I hope U [sic] many more happy birthdays as I know you will be happy because you will be with Mr. Sam and will give you a grand time.”

Charlie and Bobbie left their little cottage on the Rayburn farm around 1947. They moved into their own house in Bonham, though they continued to work for the Rayburns. Bobbie passed away on March 1, 1956. She is buried at Gates Hill Cemetery in Bonham.

In February, the Sam Rayburn House Museum paid tribute to Charlie and Bobbie Phillips and their relationship to the Rayburn family, with an open house during Black History Month. The event included themed tours of the house, a display of artifacts, and refreshments.