Sam Rayburn: Made from Wax?

Statues of Sam Rayburn abound. A bronze likeness of “Mr. Sam” stands as a sentinel outside the Sam Rayburn Museum (formerly the Sam Rayburn Library and Museum) in Bonham, Texas. Another figure of the Speaker is located outside the Rayburn Student Center on the campus of Texas A&M-Commerce. A bronze bust of the former Speaker is located in the Texas State Capitol building. Yet another is located inside the Rayburn House Office Building, which houses congressional offices on the federal government campus in Washington D.C. 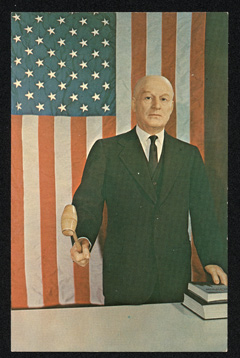 How about a figure of Sam Rayburn made from wax? Did you know it once existed? A wax figure of Rayburn was part of the Southwestern Historical Wax Museum that was once located in Dallas’ Fair Park and later in Grand Prairie.

The wax museum initially opened in Fair Park in 1963. It was founded by three men: John A. Prather, J.C. Brown, and W. Thomas Bolton, the husband to Rayburn’s niece, Virginia (Rayburn) Bolton. Virginia was the daughter of Sam’s brother Richard (Dick) Rayburn. Bolton’s interest in history led him and his wife Virginia along with their partners to develop the wax museum.

The Southwestern Historical Wax Museum displayed wax figures of historical individuals from the region. Along with Rayburn, there were also wax figures of Sam Houston, Stephen F. Austin, Lyndon Johnson, members of the Texas Rangers, and Davy Crockett. Some notorious historical characters such as Bonny Parker, Clyde Barrow, and Lee Harvey Oswald were also depicted.

The wax figure of Rayburn wore a three-piece suit that had actually been worn by the Congressman. The figure held a gavel also owned by Rayburn. An American flag hung behind the figure.

In reality, the figure of Rayburn, along with the others in the Southwestern Historical Wax Museum, were not made entirely of wax. The bodies were a wire frame covered by papier-mâché. The head, neck, and hands (and occasionally arms and legs) were made from wax. The creators strove to make the figures as realistic as possible by using historic photos and actual height measurements whenever possible.

In 1972, the museum moved from Fair Park to Grand Prairie, where approximately 1,500 people visited daily. In 1988, the museum caught fire and burned to the ground. Very little was salvaged from the wax museum. The wax figure of Rayburn was lost in the fire. The museum reopened in 1990 as the Palace of Wax on the same property where the previous wax museum was located. Today, the property includes a Ripley’s Believe It or Not! Museum and is no longer owned by members of the Rayburn family nor does it include a Rayburn figure. 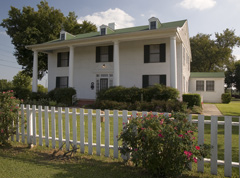 Though you may not be able to visit Rayburn’s figure at the wax museum, you can still visit his home in Bonham. Mark your calendars now to attend Farming Heritage Day at the Sam Rayburn House Museum. The event takes place on Saturday, September 28 from 10 a.m. to 3 p.m. Adults and children can take part in hands-on activities such as ice cream and butter making, seed planting, cotton picking, and other interactive displays. The event is free and will include themed tours of the house museum and refreshments.

It would be nice to see more information provided concerning Mr. Rayburn's collegiate alma mater, Texas A&M University-Commerce (TAMU-C) located in Commerce, Texas. Mr. Rayburn was a graduate of TAMU-C (Class of 1903) when the college was entitled East Texas Normal College. Like most institutions, its name has evolved over the decades and is now known as Texas A&M University-Commerce. Mr. Rayburn attributes his attending college and subsequent success to the institution's founder, Professor William Leonidas Mayo. TAMU-C was founded in 1889 making it one of the oldest institutions of higher education in Texas or the nation for that matter.

The statue of Mr. Rayburn at the entrance to the new Rayburn Student Center on campus depicts the great Speaker of the U.S. House of Representatives in a familiar pose holding a gavel in front of the rostrum for which he served over seventeen years, twice as long as the next closet Speaker, Henry Clay, an achievement that likely will never be exceeded by future Speakers.

Without the superior education that Mr. Rayburn received at East Texas Normal College (then a private institution), it is unlikely that he would have ascended to one of America's greatest statesman.

Thank you for your comment, which we will pass on to our staff at Sam Rayburn House State Historic Site. Perhaps they can do a social media post in the future about Rayburn's collegiate alma mater.

Incidentally, Rayburn is featured in the narrative of the 1967 historical marker for East Texas State University, which can be read here.