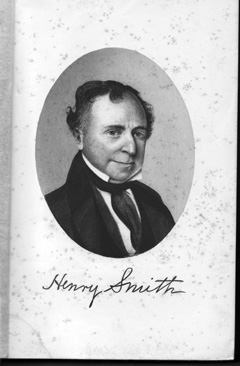 While the life of the town of San Felipe de Austin was brief, it managed to play many roles during the colonial era. One of the more obscure was its role as the capital of the provisional government over a proclaimed Mexican state of Texas (separate from the state of Coahuila). San Felipe held this status from mid-November 1835 until late February 1836, when the seat of governance moved to Washington-on-the-Brazos and the Texas Declaration of Independence was ultimately signed on March 2. The issuance of the Declaration prompted the establishment of the interim government of a Texas separated from Mexico. The provisional versus interim distinction can be a tough one to follow, but just remember that it hinges on the perceived status of Texas as Mexican or independent.

Another way to reflect on the provisional government chapter of Texas history is by focusing on the chosen governor—Henry Smith. Smith arrived in Texas around 1827 and settled within Austin’s Colony in modern-day Brazoria County. He quickly became involved in political issues, particularly those related to the governance of the Texas colonies by Mexico. Smith has been identified by most historians as an early supporter of the independence movement, frequently labeled the “war party.” He was seriously wounded during the 1832 Battle of Velasco, a confrontation with Mexican soldiers along the Gulf Coast near the modern town of Surfside. Smith was chosen to participate in the 1833 Convention hosted at San Felipe de Austin—a delegate representing Brazoria. The next year, the governor of the state of Coahuila and Texas named Smith the political chief of the department of the Brazos (a sign that the Mexican authorities thought him an exemplary citizen). And for those that appreciate deeper historical trivia—Smith has a direct connection to the Fulton Mansion State Historic Site operated by the Texas Historical Commission (THC). His daughter, Harriett, married George Fulton and was the matriarch of that historic property. 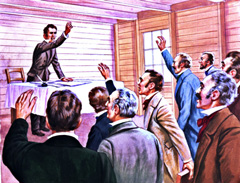 At the Consultation meeting at San Felipe in November of 1835, Smith supported an immediate declaration of independence from Mexico. Despite his minority view, he was chosen as governor of the proposed state of Texas. However, most members of the General Council (the governing body empowered during the Consultation) favored a declaration that would defend the right of colonists to take up arms against a tyrannical government (the Siege of Bexar was underway as this meeting occurred, and the “Come and Take It” incident at Gonzales had occurred more than a month before) to fight for their promised rights under the Mexican Constitution of 1824. Ultimately, Smith was to serve as the governor of a Texas presumed separate from the Mexican state of Coahuila, but still part of the Mexican Republic.

The antagonism born from Smith’s selection as governor and a majority of the General Council leadership disagreeing with his views caused the provisional government to flame out quickly. In theory, a proposed Mexican state of Texas had a provisional government based at San Felipe from November 1835 until the end of February 1836. In reality, the Smith administration collapsed into dysfunction within a few weeks—part untenable political conflict (he did not support the government effort that he was put in charge of and could not compel its members to support his views—a classic stalemate), part pressures of a mounting military campaign against the Mexican government, and a significant part the egos and personality conflicts of leaders struggling to make sense of their unique predicament. Ultimately, Smith tried to disband the General Council and they responded by impeaching him.

But, as complicated as this provisional government story can be for Texans and visitors who tend to define the history of Texas within a narrow three-staged chronology—separation from Mexico, independent Republic, part of the United States—the historical remnants that connect us to these stories are compelling.

Project historian and independent scholar Michael Moore is currently conducting an analysis of the built environment of San Felipe de Austin. It will be the best assessment to date of exactly where buildings were, how many were here, and how they were used. This groundbreaking research should assist the THC as we develop a modern visitor experience at San Felipe de Austin, both by better informing our knowledge of the potential archeology of the site and by identifying as accurately as possible the actual improved aspects of a town long gone (and dreamed on a large scale but never fully developed).

An important insight already gleaned from Moore’s early research relates to this provisional government history, and gives us a tangible way to share the real stories our real place can tell. A San Felipe resident named Joseph Urban acquired improved property near Commerce Square in 1834 (roughly in the area between the existing historic site and the Brazos River to the north). A building on that property is historically referenced as the “courthouse” or the “town hall.” Bear in mind, San Felipe had no dedicated public buildings, so these references have to do with function—one or more buildings in this area hosted the Convention meetings of 1832 and 1833 and the Consultation of 1835, and also housed the local government. During the 1936 Centennial, this long-gone “town hall” structure was deemed worthy of a granite centennial marker, which sits on the state historic site today. 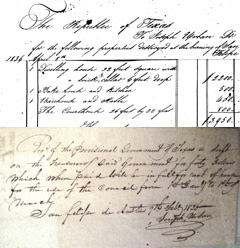 The most significant historical connection to the town hall building in recent years has been a handwritten copy of an invoice to the new Republic government. Urban filed a claim for the loss of both his home and the “courthouse” building—each destroyed when San Felipe was burned during the Runaway Scrape. During his research, Moore turned up an invoice among rarely seen files of the Texas State Library and Archives Commission. This invoice had been submitted by Urban to the provisional government for the rental of the building between January 1 and March 1, 1836. The invoice is dated February 9, 1836 and requests payment of $40. It is one of the few tangible pieces of history that relates directly to the brief provisional government experiment.

Political and governmental history can sometimes be plodding and uninspiring, but it is fair to equate the actions of delegates at San Felipe and Washington-on-the-Brazos with their forebears at Boston and Philadelphia—hardscrabble colonists who perceived oppression at the hands of their host government.  When delegates met in the years leading up to the Texas Revolution, it was to consider their options as immigrant citizens facing a breakdown in the institutional structure of their new homeland. One could argue that the justification of the Declaration of November 7th was an embodiment of the Jeffersonian tenet that the governed might have to occasionally force a change in their government in order to protect their rights. Certainly, the brief effort at a provisional government at San Felipe de Austin is an example of attempted change. It would take more, and of a more brazen nature, to ultimately free Texas from Mexican rule. But the journey from colony to Republic is a fascinating one, and these tangible historic connections are fascinating as well.

Henry Smith was my great-great-great-grandfather. Our family has been in Texas for seven generations living on portions of the original Coleman Fulton Ranch.

A little-known fact is that Henry Smith made the seal of Texas (the five-pointed star). It was a button off his great-coat. The laurel wreath was added in the 1936 centennial.