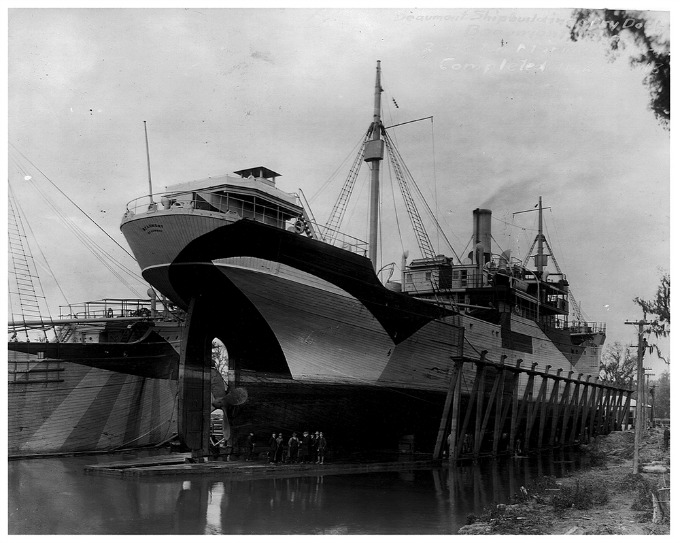 This wooden vessel was constructed in Beaumont in 1918. Many similar ships were built for the government’s Emergency Fleet Corporation during World War I. Credit: National Archives and Records Administration

As the Texas Historical Commission continues its commemoration of the World War I centennial, one of the agency’s primary missions is to educate Texans about the state’s connection to the Great War. Many residents may be surprised to learn about the number of World War I-related shipwrecks in Texas.

In fact, the THC’s Marine Archeology Program oversees 32 war-associated shipwreck archeological sites in state waters—the largest number of discovered shipwrecks by historical category. All of these are tied to Texas’ World War I shipbuilding effort. To offset allied merchant vessel losses during the war, the U.S. Shipping Board contracted new ship construction in southeastern Texas. Due to concerns about metal shortages during the war, shipbuilders supplemented the steel fleets with more traditional material types, such as wood, and also experimented with concrete. The construction of these vessels was designed, contracted, or commenced during the war, although they may have been built later and repurposed.

Wooden vessels built in Texas during World War I were constructed for the Emergency Fleet Corporation (EFC) and are believed to be primarily 281-foot “Ferris” class steamships. These were predominantly constructed in Orange and Beaumont due to the plentiful pine resources, but also in Rockport.

With the armistice, contracts were terminated and many vessels were unfinished. Attempts to sell or convert the ships largely failed, and many were abandoned in the Sabine and Neches rivers in the 1920s. There are 29 wooden EFC vessels in East Texas rivers and an additional nine on the Louisiana side of the Sabine River. This is believed to be the second-largest collection of abandoned EFC vessels in the U.S., after the Mallow Bay “Ghost Fleet” in Maryland’s Potomac River.

Many of these Texas shipwrecks are locally well known and are sometimes visible when river levels are low. The THC’s Marine Archeology Program, in partnership with the Underwater and Historical Exploration Society and Louisiana’s Office of Cultural Development’s Division of Archaeology, investigated some of the sunken Sabine River EFC vessels from 1999–2000. One of the Neches River wrecks was discovered in 2006 by environmental consulting firm PBS&J during a survey for a Texas Department of Transportation bridge construction project.

Texas’ best-known concrete ship from World War I is the 425-foot tanker SS Selma, which was built in 1918 and served as a merchant vessel for less than a year before running aground near Tampico, Mexico. SS Selma limped back to Galveston for repairs, which were ultimately determined to be too complicated. Instead, SS Selma was deliberately sunk in a shallow area in Galveston Bay.

Two concrete ships—Darlington and Durham—were built in Port Aransas in 1919. These ships had rounded hulls, which caused them to be very poor sailers. By 1925, both ships were no longer in service. Durham was sunk to be used as a fishing pier off Galveston, and Darlington sank in Matagorda Bay as it was towed to Galveston.

“Wooden and concrete ships are one of Texas’ lesser-known connections to World War I,” said Pat Mercado-Allinger, director of the THC’s Archeology Division. “As we continue to learn more about this unique aspect of Texas history, we take pride in adding to our state’s World War I legacy.”