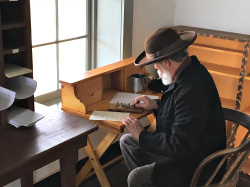 From 1874–76, the U.S. Army spent $100,000 to construct a military telegraph line that connected all the frontier and border forts in Texas. This work was overseen by 1st Lt. Adolphus W. Greely. On October 19, Forts McKavett, Concho, and Griffin were connected to each other and the Signal Service Headquarters in Denison. In the spring of 1876, these forts were also connected to the Department Headquarters at San Antonio, completing the statewide network.

On April 15, 2017, Fort McKavett State Historic Site offered an educational program to living historians and the public focused on the transmission and receipt of telegrams using their newly installed telegraph system. The Friends of Fort McKavett purchased two antique telegraph sets and site staff connected them between two rooms in the Headquarters building. Several living historians and Friends of the Fort attended the program to learn how these frontier soldiers communicated rapidly across great distances. 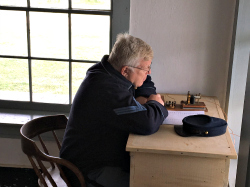 Historically, the Army was using the General Service Code (GSC) rather than the more well-known Morse Code. The GSC is a form of binary with 1s and 2s that communicates letters of the alphabet and numerals. This code is very complicated to transmit and even harder to decipher. Given the difficult nature of the GSC, the program focused on the use of Morse Code, which is a series of short and long sounds (dots and dashes).

Attendees were offered a chance to try their hand at it, and many visitors spent some time learning the alphabet. Historical documents were also on hand telling the story of the military telegraph in Texas. For more information about that endeavor and other topics, be sure to visit Fort McKavett’s History section.