Small Town Recaptures Movie Magic of the Past

This article was originally featured in the October 1991 issue of The Medallion. 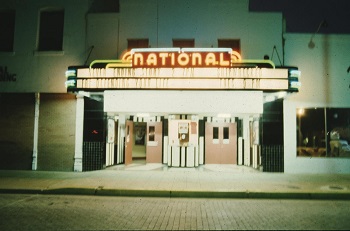 Remember when going to the movies downtown or at the local drive-in theater was a special treat, reserved for Saturday nights with the family, friends, or a date? The movies offered an escape to an exotic locale or time, or simply an opportunity to congregate with friends or neighbors. Many people still have special memories associated with these evenings.

Thousands of older theaters and drive-ins across the state are disappearing at an alarming rate due to fires, neglect, and development pressures. However, some communities have realized the value of these landmarks and are committing funds to their restoration or maintenance. One such community is Graham in North Texas. With just 9,000 residents, Graham boasts a restored movie theater downtown and a drive-in.

The town’s National Theater was built in 1919, but a 1939 fire destroyed the interior, leaving only the seats and outside walls. Rebuilt in 1940 with the aid of Cogan and Moore, a Dallas architectural firm, the “new” theater featured a Modern interior, a style that consciously strived for modernity and an artistic expression to complement the machine age.

The building’s interior was changed to focus on the future rather than the past, unlike earlier styles that re-created elaborate Italian gardens, Egyptian temples, or Persian palaces. Red and tan burlap covers the walls and ceiling, both for visual as well as acoustical reasons, and the same color scheme is repeated in the lobby with checker-board flooring, red doors, and tan walls.

In addition, the theater was the first in Graham to incorporate new technology such as fluorescent lighting and air conditioning. The theater’s present owners, David and Pam Scott, spent many hours researching and restoring the building to its 1940 appearance. 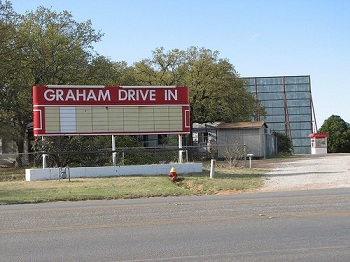 Graham’s drive-in was built in the late 1940s by Allstate Theaters. As the automobile became more common and affordable, it was used not only as a means of transportation, but also to pursue leisure-time activities. As a result, drive-ins rapidly cropped up in towns and cities across the country. Graham’s drive-in features its original mushroom-shaped ground lighting and car speakers that are still in use.

When the drive-in closed in 1989, residents Cloys and Carol Trout purchased it and opened it to the public once again. Carol Trout had fond memories of working at the drive-in in 1953 and again in the mid-1960s, and did not want to see it die.

Today, both theaters compete with large movie franchises, multi-screen cinemas, and home videos. Recently, however, a movie being shown at the National Theater produced a line a block long and a full house of 300 moviegoers; it’s been several decades at least since it enjoyed this kind of business. Perhaps there is room yet for the old neighborhood theater in our quickly changing electronic world.