Spring into the Rayburn Book Collection 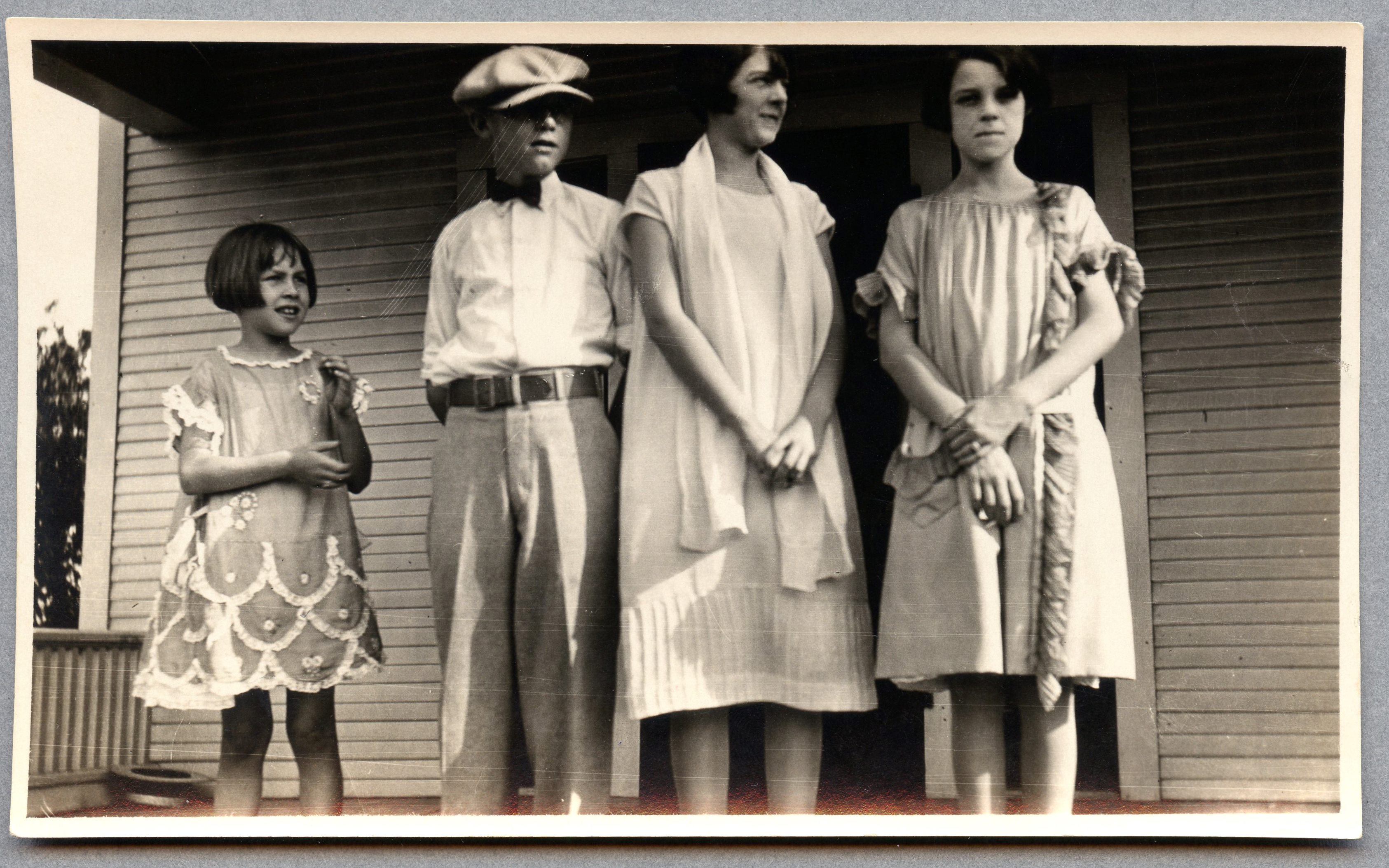 At least eight people called the Sam Rayburn House State Historic Site their home from 1916 to 1969. These people ate here, slept here, listened to the radio, and eventually watched TV here. We know the most about Sam Rayburn since he’s the family member that has had the most written about him.

These writings have told us about the food he likes (onion sandwiches), how he hated small talk, and what he thought about the presidents he served with. Some of these articles and books about Sam Rayburn feature insights from his family about him, their famous relative.

However, there is much less written about his family members and their personalities—the little things they did in their lives that made them the main characters of their story rather than supporting characters in Sam’s story.

Unfortunately, I won’t be able to tell you everything about these Rayburns. But I can look through their stuff and together we can try to figure them out. This month, I’m snooping through some Rayburn books (it’s alright for historians to snoop) to see what they liked to read.

Martha Rayburn, the family matriarch, instilled the love of reading in her family. Her husband, William, was illiterate before his wife taught him to read and write. Afterward, William could finally read anything he could get his hands on, which led to intense discussions about history and politics with his family.

We know what Sam did with his ability to read—he consumed biographies about historical American figures, from presidents to military leaders. After Sam reached Washington, D.C., in 1913, former Speaker of the House Champ Clark gave him a list of books to read to improve his political and historical knowledge.

Sam gathered these books from the Library of Congress, and eventually started initialing page 99 in every book that he ever read. He also enjoyed works of fiction, specifically pulp detective and western novels. The Sam Rayburn Library, now the Sam Rayburn Museum, contains most of Sam’s book collection. However, we still have some of his books.

Although it may be difficult to tell for sure whose book belonged to whom from our collection, just knowing the titles of these works provides us with some understanding about those who lived in the house over time: parents William and Martha; siblings Lucinda, Will, Sam, Tom, and Medibel; and at times, Medibel’s husband, Samuel Edward “S.E.” Bartley, and their son, Robert. The family had several bibles, some books about Texas, Christmas books, and at least one entire series of encyclopedias.

Medibel, and perhaps someone else, kept her son’s school textbooks and yearbooks as well as at least one other book from a Rayburn niece. The family and their household caretaker, Bobbie Phillips, collected several cookbooks. Sam and Lucinda likely provided the Congressional Club cookbooks. Any other books related to Congress, state, and federal laws, and one dictionary probably belonged to Sam as well.

Lucinda was kind enough to work as her brother Sam’s hostess during social events in Washington, D.C., and their home in Bonham. We say that Sam’s sisters Kate and Medibel were interested in politics more than Lucinda, though Lucinda wouldn’t have had such a good relationship with Sam or be able to fit into the Washington social scene if she didn’t have some inclination for the topic. Lucinda was a bit more interested in the social than the political.

So, I believe that The Social List of Washington, D.C. by Carolyn Hagner Shaw, published in 1950, was something that Lucinda perused. Helen Ray Hagner first published this book series, nicknamed “The Green Book” due to its green cover, in 1930. According to the Green Book website, the responsibility for gathering the names of the Washington elite (from families to members of Congress to diplomats) as well as answering questions about proper social etiquette remains within the Hagner/Shaw bloodline today. 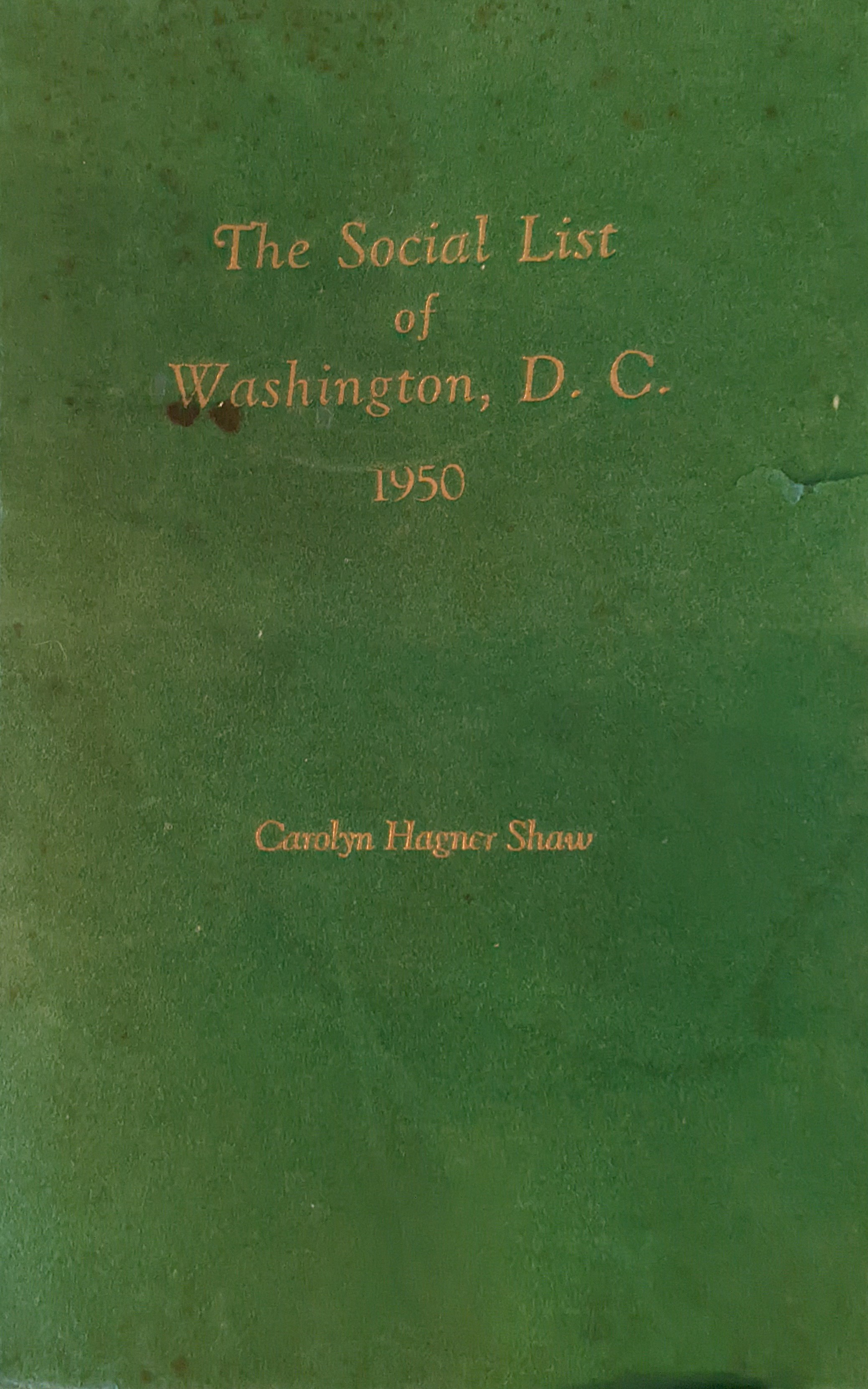 Lucinda needed a book such as this to keep herself up to date with who’s who in Washington. Lucinda did have a copy of Beverly of Graustark by George Barr McCutcheon, an indication that she had some interest in fantasy and romance novels as well.

For example, Hope Ridings Miller (a Washington, D.C. journalist and native of Bonham) gave Medibel a copy of Emmet Fox’s Power Through Constructive Thinking. Hope wrote, “This book is a constant source of comfort to me. I trust it will be the same for you.” Other books within these genres that Medibel likely read include: The Secret of the Kingdom by Mika Waltari, the Keys to Happiness: A Reader’s Digest Guide to Successful Living, Upon this Rock by Frank G. Slaughter, and When You Lose a Loved One by Allen and Rice. Several music books are also in our collection, with one, “Stray Leaves: 12 Easy, Melodious Pieces for Piano,” belonging to Medibel.

Other musical books involve mandolin, guitar, and vocal instruction. We have one picture of Medibel in a band of some sort, though I haven’t come across more information about that part of her life (but I’ll work on it). There were also some books about teacher training courses and what subjects were being taught in Texas schools, though whether these were out of curiosity from Medibel or indications that she might have worked as a teacher in some capacity is hard to determine. 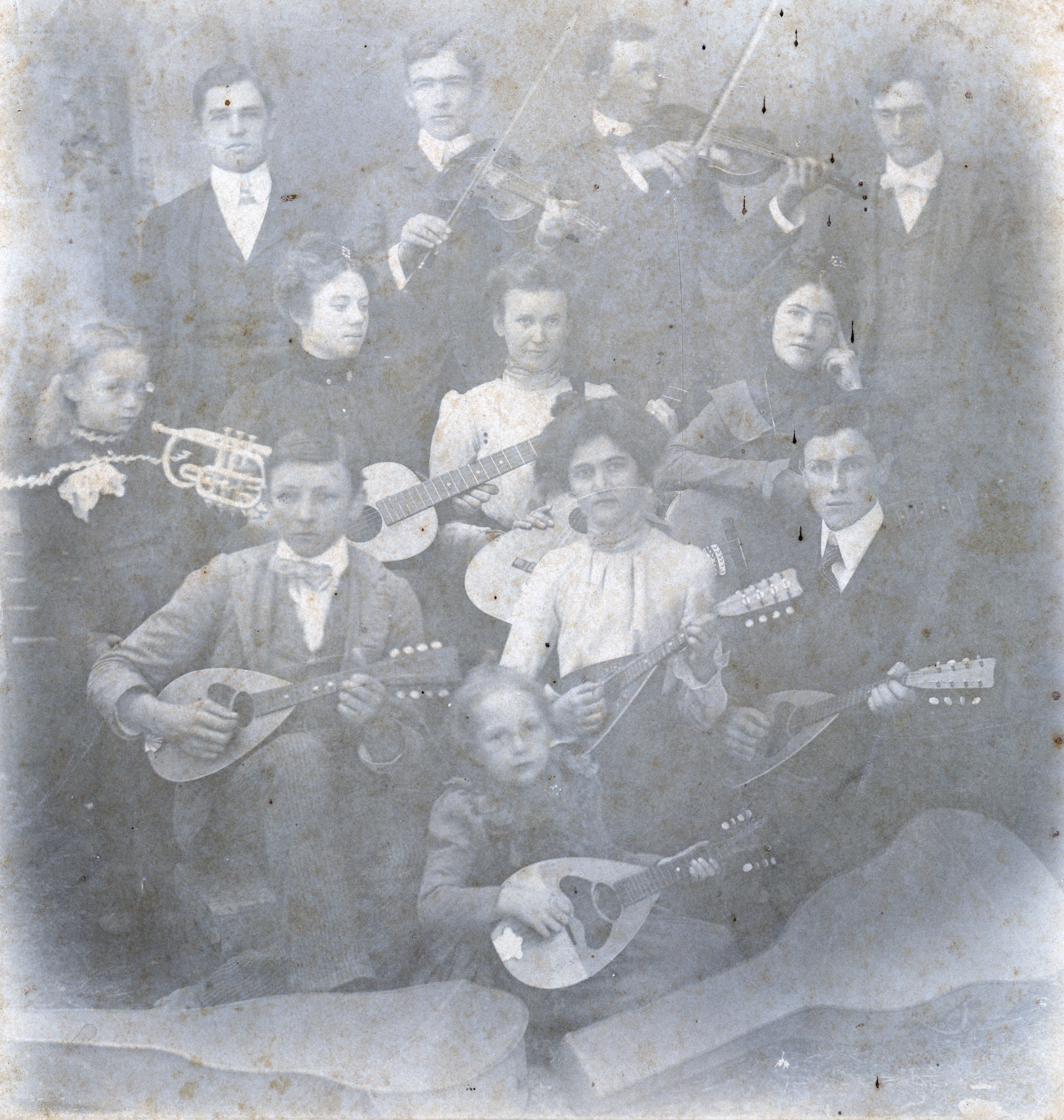 S.E. journaled for a few days in his book, A Brief History of the Nations and of Their Progress in Civilization by George Park Fisher. He wrote his name in the book and where he lived on September 5, 1898, presumably when he received it. On May 7, 1899, he wrote, “I saw a maiden pass.” On May 29th, he was “happy as a June Bug.”

Whether or not Medibel was this maiden, S.E. felt the need to record the maiden he saw (Medibel and S.E. married on October 8, 1902). S.E. may have had a romantic spirit based on all the poetry he collected. He also read plenty of classic Western literature. S.E.’s diploma contains a list of the courses he took in high school, including: Introductory Latin, Viri Romae (more Latin), Caesar, Vergil (a poet, sometimes spelled “Virgil”), Cicero (philosopher), and Horace (poet).

He also took some math courses and ended up having a career in the banking industry, but his love of literature and poetry never left him. He had a series of poetical works from Alexander Pope, John Dryden, William Wordsworth, Robert Lowell, and John Greenleaf Whittier. He also had works from Charlotte Brontë, Charles Lamb, George Eliot, and others. The Poetry Foundation website has information about most of these poets if you want to learn more about them. Outside of poems, S.E. or other family members had copies of The Brass Check by Upton Sinclair, The Count of Monte-Cristo by Alexander Dumas, and Animal Farm by George Orwell. Did you know that Edward Bulwer-Lytton was the person who began the book Paul Clifford with the words, “It was a dark and stormy night?” I do now, since I had to look up the author because S.E. had a book with two of his works in it: Kenelm Chillingly and Rienzi.

The great thing about most of these books, particularly the classical literature and poems S.E. read, is that they’re all well past copyright and you can find them free online from Project Gutenberg, which provides eBooks or digitized copies of copyright-free material, from novels to poems to cookbooks. 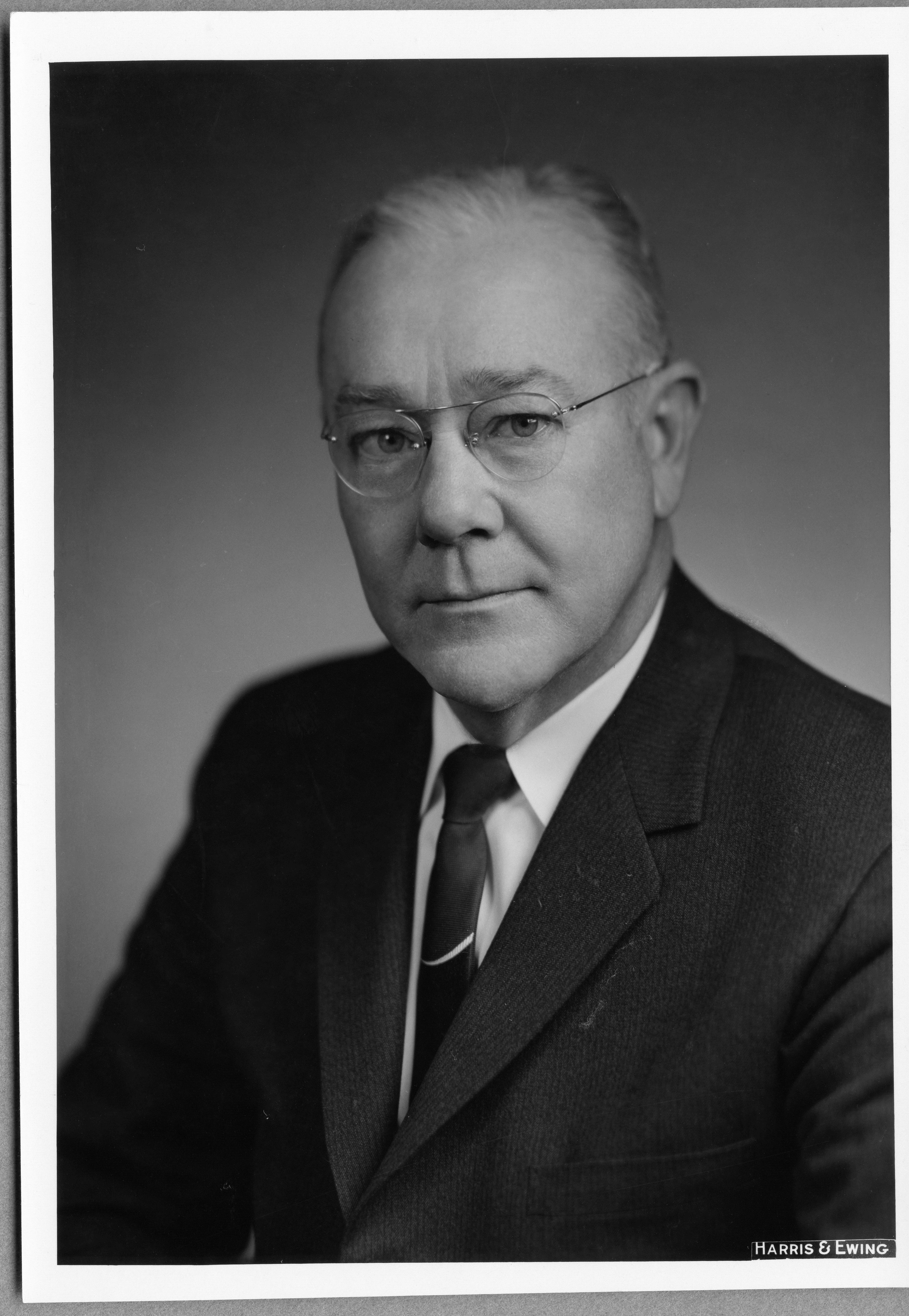 Joyce Rayburn, one of James “Jim” Rayburn’s children, wrote all over her or someone else’s arithmetic book. Under a lesson about British money, she wrote, “If you see a cat up a tree, pull his tail and think of [me].” She seemed to enjoy writing her name with and around her initials. There also appears to be writing from a different kind of pencil or ink. We have a few of Robert Bartley’s books, both from school and his own personal collection.

One such book, Latin Grammar by Charles E. Bennett, contains drawings and writings. However, these may or may not have been done by Robert, as the name Liebling Mayo is written in the book, along with an indicated year of 1923 and “Bryan High School,” which likely referenced Bryan Street High School in Dallas. Liebling Mayo was the foster son of W.A. and Kate Thomas, with Kate being Robert’s aunt.

With both families living in Dallas, it is possible that Liebling allowed Robert to use some of his old textbooks. Robert graduated from Highland Park High School in 1927, and Liebling was slightly older than Robert, so they may not have attended the same school together.

Although I can’t say for sure which Rayburn family member did the work in the book, Robert signed his name on at least one drawing at the bottom of the very first page of the book, possibly having drawn all of the interpretations of “Egyptian Dancers in Cleopatra’s Time.” One of the boys appeared to make some Latin-based jokes.

One sentence reads, “Caesar sic dacat on decur, agessi licum,” which isn’t all true Latin, and underneath says in parentheses, “Caesar sicked the cat on the cur and I [guess] he liked him.” On the title page of the book, someone wrote, “If Plato could Shimmie could Aris-toddle?”

The denouement to this story is that the Rayburn family was made up of people we can connect to, even if their lives seem so much more different than ours. For instance, I’m not sure that S.E. Bartley and I would’ve had a whole lot in common—he probably owned the Edgar Allan Poe bookends you can see in the sitting room, while I have Superman bookends at my house and I own more VHS tapes that poetry books—but I can at least read any of these books if I ever need some insight into him or the other people of the Sam Rayburn House.

I’m always looking for ways to understand the Rayburns through the things that they did, and it helps when I find an experience we’ve shared. Although they won’t be open to where you can see the pages, we do have these books on shelves in the Rayburn House.