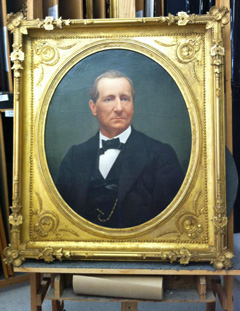 A restored portrait of George Clapp once more graces the parlor walls of Maplecroft, the 1871 home of Frank and Clara Starr. Clapp’s portrait is one of 12 portraits in Starr Family Home State Historic Site’s collection, which depicts the first three generations of the Starr family and dates from the mid-19th century. It is the second portrait in the collection to be conserved. The portrait of Sarah Clapp, Clapp’s wife and mother of Clara Starr, was restored last year.

Of the 12 portraits, 10 are large oils on canvas, with the remaining two being large photographs. All portraits are framed in ornate gold and silver gilt Renaissance, Rococo, and Greek Revival frames that complement the Victorian interior in Maplecroft.

The conservation of the portraits and their frames was a special project of the Friends of the Texas Historical Commission, which raised money to have the first two portraits conserved. Generations of dust and grime were cleaned from the Clapp portraits, their canvases were lined to better support the paint layers and keep tears from occurring, and cracks in the paint were repaired. These efforts not only restored the original beauty of these unique portraits, but they helped ensure their longevity by reversing conditions that cause deterioration. While conservation is costly, the portraits are priceless works of art and teaching tools that help illustrate the fashion, wealth, and lifestyle of the Starr family and their contemporaries in the 19th century.

The 10 painted portraits are believed to have been created from photographs at a New Orleans studio during the 1880s. One of Frank Starr’s letters mentions Washburn’s Studio specifically. It is known that the 19th-century portrait artist Henry Byrd worked at Washburn’s during this time period, but little other documentation has been found.

Starr Family Home Curator Megan Maxwell will travel to Louisiana in the spring of 2015 with the specific mission of finding the origin of the portraits. She will be looking in collections held by Louisiana’s universities in hopes that information mined there will point to more specific sources.

George Clapp was not a blood relative of the Starr Family; he was the second husband of Sarah Clapp and stepfather of Clara Starr, the original mistress of Maplecroft. The Starr and Clapp families were connected by another marriage as George Clapp’s brother, Emory, was married to Frank Starr’s sister, Pamela. The two families were also connected by a business relationship for many years.

George and Sarah Clapp, Frank Starr’s in-laws, provided most of the funds for Frank and Clara to build Maplecroft. If it weren’t for their generosity, perhaps the Starr Family Home would not be the fine example of Victorian architecture seen in Maplecroft. The Clapps are owed a debt of gratitude for such an enduring legacy.