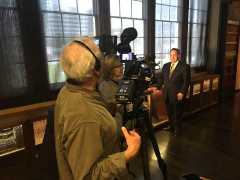 UPDATE: Since the publication of this story, the mobile tour, “Hispanic Texans: Journey from Empire to Democracy,” has been released. Watch the video referenced in this story below, and download or view the mobile tour and print guide at our Hispanic heritage travel webpage.

High-rise living and office space is what visitors will find in the area once known as Dallas’ Little Mexico barrio. However, stories told by former residents offer a glimpse of earlier barrio life, and neighborhood places still hold those memories. THC Heritage Tourism Program staff recently traveled to Dallas to document some of the people and places of Little Mexico. A two-minute video will be part of a mobile tour of Texas’ Hispanic heritage that is expected to launch this summer as part of our Texas Time Travel Tours app and as a companion piece to our new Hispanic heritage travel guide.

Attorney and former Little Mexico resident Sol Villasana is featured in the video. He is the author of Dallas’ Little Mexico, a pictorial history of the barrio’s people and places. In the video, Villasana talks about what it was like to grow up visiting family homes and businesses throughout the neighborhood and how it quickly changed when the Dallas North Tollway cut through in the 1960s. People began to move away and most businesses slowly closed as the area transitioned.

Villasana speaks about how he and alumni of the St. Ann School worked together to obtain a City of Dallas Landmark designation for the St. Ann School building, now serving as a restaurant and museum. Visitors to the former Little Mexico neighborhood can relax and dine while enjoying a view of Pike Park. 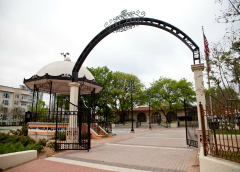 St. Ann School and Pike Park both loom large in the memories of those who grew up in the barrio. The Dallas Mexican American Historical League (DMAHL), established in 2008 to preserve Mexican American history in Dallas, considers Pike Park its first preservation project. Designated a City of Dallas Landmark in 2000, the city has renovated the gazebo and exterior features. The group continues to work with the city to ensure the park remains a vital neighborhood amenity, serving those who live in the area today. DMAHL envisions the park’s usefulness beyond the playground to include restoration of the 1914 recreation center. Members would like the historic building to once again host lectures, exhibits, meetings, and celebrations, continuing Pike Park’s legacy as a venue for Dallas’ early Cinco de Mayo and Diez y Seis events. 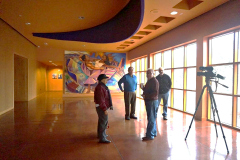 DMAHL continues to build awareness of the collective impact of all Dallas barrios. Award-winning exhibits have educated diverse audiences on such topics as early Mexican American female leaders in Dallas, the first 100 years of Mexican American history in Dallas, and the struggle for Mexican American civil rights in Dallas. An exhibit slated to open in September will chronicle and honor the contributions of Dallas’ Mexican American veterans from World War I to the present. Learn more about DMAHL projects and view the promotional video about the upcoming military exhibit at the DMAHL website.

Pike Park and Dallas’ Latino Cultural Center are two of more than 100 sites featured in our new Hispanic heritage travel guide, Hispanic Texans: Journey from Empire to Democracy. The statewide guide serves as an introduction to the first 500 years of the rich and colorful Hispanic experience in Texas. The companion mobile app tour and a Spanish version of the print guide will be released later this summer. Order or download your free copy of the print guide today!

Now that the mobile tour has been released, watch the video referenced in this story:

Our family lived at Little Mexico from 1942 to 1967.My fondest memories are from sports,table games,swimming,baseball,TV room,dances,all and more,from Pike Park.Its always great to see people from the barrio.We need Pikes to be open for many events.