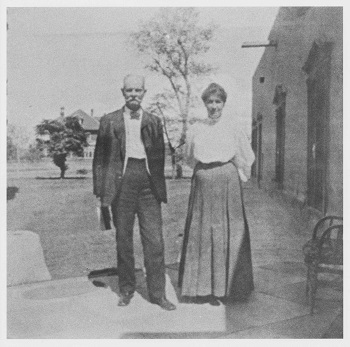 The stories of El Paso's Magoffin family are intertwined with the diverse dynamics of the borderland in the late 1800s. These are the real stories of people whose lives were impacted when Joseph and Octavia Magoffin moved into their new home in 1877.

Uncle Charlie Richardson was Joseph Magoffin’s first-cousin, brother-in-law, best friend, and mortgage holder. He lived much of his life with Joseph in the Magoffin Home.

Charlie was a wealthy man, having probably come into money upon his father’s death. In a letter from Samuel Magoffin to Isaac Lightner, San Antonio 15 of December, 1855 - “… Josephine [Joseph’s sister] is to be married to my nephew Charles Richardson around the 15th day of next month. …  Mr. R is quite a young man…. [who] has a cotton plantation with about eighty negroes.” When his Mississippi plantation was sold, Uncle Charlie freed all the slaves.

He then moved to the St. Louis area. It was in St. Louis that Charlie was married on his 21st birthday to Joseph Magoffin’s sister Josephine. Josephine Magoffin Richardson was educated at the Convent of the Visitation in St. Louis.

Uncle Charlie and Josephine moved to Magoffinsville (now part of El Paso) in 1858. They returned to the St. Louis area for awhile in the 1860s.

He eventually returned to the El Paso area in 1868. Josephine Magoffin Richardson died October 14, 1886 in the Magoffin Home.

Uncle Charlie was the U.S. Consulate in Cuidad Juárez, Mexico, serving presidents James A. Garfield and Chester A. Arthur. He owned vineyards and orchards in the border area.

His obituary states, “Mr. Richardson was a man of engaging personality, and the closer one got to him the more they loved and admired him. Though outspoken and perfectly frank in expressing his opinion of men and measure, his innate courtesy and kindness of heart prevented him from ever carelessly wounding the feelings of any person. He loved his fellow man, and saw only the good that was in all mankind.”