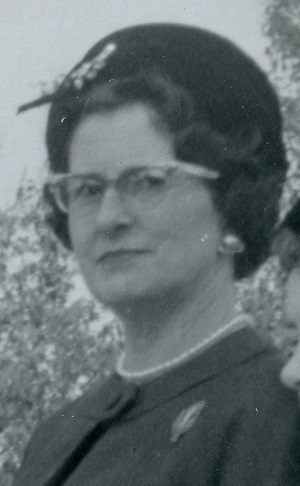 Loyce Cordelia DeBerry was the daughter of Henry M. and Nora DeBerry of Whiteright, Texas. Loyce grew up in a family with four siblings in a home located along the road between Whiteright and Kentucky Town. She was a member of the 1930 graduating class of Whiteright High School. The following spring, she returned home from East Texas State Teachers College in Commerce with a teacher’s certificate.

In June 1940, she was named attaché of the Land Utilization Division of the Soil Conservation Service in Bonham. On her 29th birthday, Loyce married Sam Rayburn’s brother Tom on April 27, 1941, in McKinney, Texas. Tom and Loyce owned the farm property adjacent to Sam’s “home place," just to the west. They began living there in 1941, shortly after their wedding. Sam Rayburn’s great nephew, Buck Bartley, and great nieces, Jane Bartley and Linda Cormack, spoke of fond memories of Loyce and Tom, and remembered them as being a very warm and loving couple.

The couple never had children, which apparently did cause some sadness but was never openly discussed. Buck, Jane, and Linda recalled that Loyce raised white turkeys that she sold at Thanksgiving and Christmas each year. The nieces and nephews would help her round up the turkeys to bring them into the barnyard for feeding. Loyce was very reserved and unassuming. Those interviewed never saw her angry or say an unkind word about someone.

Tom passed away in 1960, but Loyce stayed on in their home for several years. Around 1972, she sold the farm and moved to Bonham to work at the Sam Rayburn Library from 1960 to 1975. She provided administrative support and gave tours there.

Loyce Rayburn was an integral part of the restoration and research that went into the Sam Rayburn House Museum during its formation from 1971 to 1975. She provided oral histories and memories of the house and Rayburn family. These recollections aided the development of the interpretation of the home as a museum.

Along with family, she was also beloved by the Rayburn House Museum’s staff. Over Christmas of 1974, Loyce welcomed the new museum director’s family to Fannin County with a Rayburn family holiday staple: cranberry ice. Dr. John Jameson, former director of the museum, recalled, “We experienced first-hand the famous Rayburn hospitality I had heard so much about, and it made an impression on us we will never forget.”

Loyce Cordelia Rayburn died on December 9, 1977 after a brief battle with cancer in Sherman, Texas. She was buried next to her husband Tom.

Step into the warm and welcoming world of one of Texas’ best-known statesmen, Sam Rayburn. One of the most powerful and influential politicians in the 20th century, Rayburn served in the U.S. Congress for 48 years, holding the position of speaker for 17 years.

His 1916 home, now the Sam Rayburn House State Historic Site in Bonham, preserves his real stories with original furnishings, candid photographs, and personal belongings, remaining as they were when he lived here.