Texas caverns contain a natural sense of intrigue. How can these stunningly beautiful formations be hiding below scrubby patches of Hill Country landscape? How did someone first discover these otherworldly treasures? And how did they form in the first place?

According to Travis Wuest, co-owner of Natural Bridge Caverns, there are nearly 3,000 caves in the Hill Country region. And contrary to popular belief, they aren’t connected by a vast underground system.

“Each one formed along a different fault or joint in the bedrock—they’re unique systems unto themselves,” he says. “Caves are pretty common out here, mainly because of the limestone karst topography.”

Most Texas caverns are tens of millions of years old and were formed by a combination of ground water and natural acids. Carbonic acid, created when water percolates through the soil and collects carbon dioxide, dissolved minerals from the rock, creating classic cave formations like stalactites and stalagmites.

These remarkable formations—many appearing to be waxy drippings or creamy confectionary treats—are on full display at the Texas Cave Trail’s four caverns. And despite the lure of 70-degree temperatures providing a break from the summer heat, most of the caverns have a 98% humidity factor. Regardless, the subterranean escape into any of the following four caves offers historical adventures throughout the year. 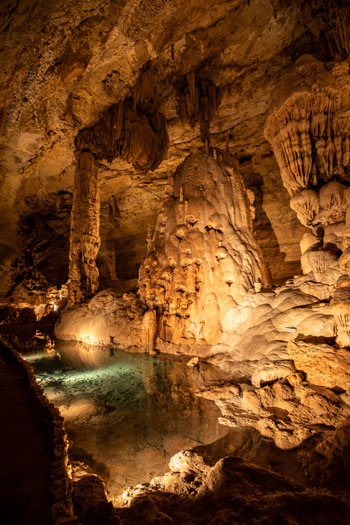 According to Wuest, Natural Bridge Caverns and its surrounding acreage have been tied to his family for five generations, dating to 1883. What sets this site apart from others is the presence of a large natural sinkhole, located directly below the namesake 60-foot-long natural bridge.

Indicative of a cavern, the sinkhole drew curiosity-seekers for many years (graffiti just below the surface dates to the 1930s), but its full splendor wasn’t discovered until 1960, when Wuest’s grandmother Clara received a fateful knock on her door. Four students from St. Mary’s College in San Antonio asked to explore the sinkhole area—an excursion that started with a tiny crawlspace and ultimately ended with the discovery of a massive column-filled room now known as Sherwood Forest.

“When the four of them came out of there, they knew they’d found something big—they were just babbling and talking over each other all excitedly,” Wuest recalls his grandmother telling him. “She said, ‘Now just slow down and speak one at a time.’ My father Reggie went down there later, and he confirmed it.”

The cave—considered the largest of its kind in Texas—was officially dedicated by Gov. John Connally in 1964. Clara went on to become a maverick business owner who developed bold business plans, emerged as a respected tourism leader, and was named the first female president of the National Caves Association. She eventually taught Travis and his brother Brad about running a successful family business.

“I often find myself thinking about the discovery of this place by those four guys—there’s something fascinating about being an explorer and seeing what no person has ever seen before,” Wuest says. “This cave is unique and beautiful, and we’re so proud of our family’s association with it. It’s really rewarding to be a part of Texas history.”

CAVE WITHOUT A NAME, BOERNE 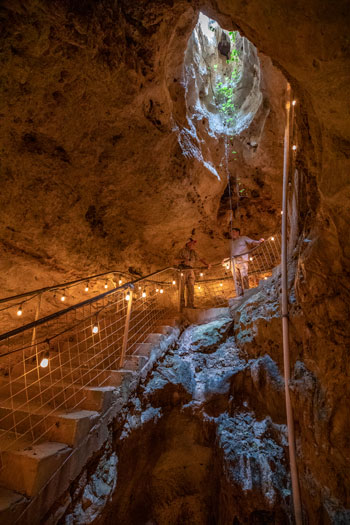 About 30 miles northwest is the refreshingly non-commercial and cooler (66 degrees) Cave Without a Name. According to owner Tom Summers, most visitors are curious about the cave’s name before inquiring about its founding and formations.

In 1939, then-owner James Horne held a contest to determine a name for the recently opened cave. A young boy determined the cavern was “far too beautiful to have a name,” which impressed judges enough to award him the $250 prize.

The cave was originally discovered in 1937, when a goat fell into a small sinkhole; the resulting rescue efforts revealed there was a 45-foot pit leading to larger openings and six elaborately decorated rooms.

Horne developed the cave by installing stairs and lighting for walkways and dramatic effects. Even more appealing are the magnificent formations, including a section of wavy-thin striped flowstone (known as bacon strips) considered some of the largest in the state. Other impressive food-based limestone features include white grapes, fried eggs, and soda straws.

The most notable landmark is the cavernous Queen’s Throne Room, featuring a remarkable natural dome with elaborate regal formations. Summers enhances the setting by hosting several events here throughout the year, including choral performances and weddings.

“It’s awe-inspiring what nature can create in total darkness and silence,” Summers said. “The grounds provide a country ambiance—a place to relax and refresh the spirit.” 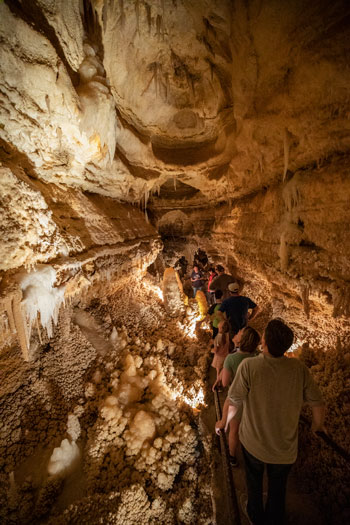 Stretching across several subterranean miles along the edge of West Texas are the captivating Caverns of Sonora. According to veteran guide Bill Sawyer, the cave was discovered about 120 years ago when the Mayfield Ranch owners’ dog ambushed a raccoon and chased itinto an 18-inch opening.

Although the Mayfields didn’t explore much beyond the surface, they marked the opening with a large rock and, more importantly, noted the site on a map. Decades later, local residents used the map to find the cave opening, which ultimately led to further exploration and the discovery of formation-filled passages and rooms.

Sawyer adds that the Caverns of Sonora are unique in Texas due to their origin story. It’s considered a hypogenic cave, forming from a mixture of water sources in an upward direction, compared to the traditional method (epigenic) with water seeping down from the surface. The cave is also distinctive for its helictite formations, thin crystalline objects—some are referred to as butterflies and fishtails—which often appear to grow horizontally out of the cave wall.

Although the cave doesn’t contain evidence of Native American occupation, Sawyer reports that explorers found bones from 40 different kinds of animals dating up to 3,000 years old. Since the cave’s public opening in 1960, however, its human visitors have been drawn by the magnificent underground “crystal kingdom.”

In 1963, the Texas Highway Department was working on a portion of Interstate 35; to determine ground stability for an overpass, crew members drilled core samples. During one attempt, the drill bit unexpectedly dropped more than 20 feet into a chasm. This led to the discovery of the stunning Inner Space Cavern.

Months later, explorers tied a rope to a vehicle above the opening and lowered spelunkers into the cave to survey the rooms and passages. By 1966, trails were established, and Inner Space Caverns opened to the public.

The discovery of prehistoric fossils sets Inner Space apart from other caverns on the Texas Cave Trail. More than 40 species were found, including 11 that are now extinct. The fascinating finds included a car-sized armadillo (known as a glyptodont), saber-toothed cat, mammoth, and camel-like creature. Images of these beasts adorn the cave walls as visitors descend into the cavern on tours. Once below ground, they encounter remarkable cream-colored formations with evocative names like the Flowing Stone of Time and Lake of the Moon.

Inner Space offers several ways to explore these highlights and other locations, ranging from a general guided tour to a “Wild Cave Tour” allowing visitors to walk and crawl through remote sections of the cavern.