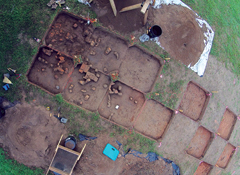 On a hot and muggy June morning, members of the Texas Historical Commission’s (THC) Texas Archeological Stewardship Network (TASN) arrived at San Felipe de Austin State Historic Site with an important mission: to unearth significant history. Located in the small village of San Felipe about 40 miles west of Houston, the site served as the hub of government and commerce for the Mexican colony and its settlers—including Stephen F. Austin, who laid out the township in 1823.

The highly skilled TASN volunteers were there to assist the THC’s Archeology Division with the fourth round of San Felipe test excavations, held in conjunction with the Texas Archeological Society’s (TAS) week-long field school in nearby Columbus for the third consecutive year. Several Houston Archeological Society (HAS) and TAS members assisted the TASN participants. The goal of this summer’s work was to locate two important features at the site: a brick oven and a wood courthouse.

The brick oven was owned and operated by Celia Allen, an African American woman who had been granted her freedom while living at Austin’s colony. The oven also functioned as a battery for cannon used by the Mexican army to fire on the San Felipe militia that had entrenched across the Brazos River to hold the crossing during the Runaway Scrape. Although the entire town of San Felipe had been intentionally set ablaze prior to the arrival of the Mexican forces, Celia returned afterward and reestablished her bakery.

Archival research conducted by historian Michael Moore, project consultant for the THC, indicates the oven was located in the southeast corner of Lot 579-A within the platted township of San Felipe. Remote sensing investigations conducted by THC archeologist Tiffany Osburn identified a magnetic disturbance in the vicinity of the oven’s presumed location. 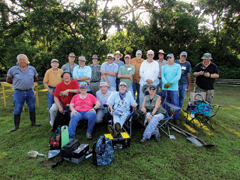 With trowels in hand (and direction from the THC’s Archeology Division), volunteers uncovered a brick alignment, which may be part of the oven. Several nearby artifacts were also discovered, including a white porcelain mortar and an iron hinge section (possibly from the oven’s door), which offer intriguing clues to the bricks’ use.

The second feature excavators hoped to find was a small wooden building described variously in archival records as San Felipe’s “Court House” or “Convention Hall.” Moore’s research suggests this structure stood on Lot 566, where the brick basement of the Farmer’s Hotel had been located and excavated during the two previous summer field school sessions. According to Moore, this lot was subdivided numerous times, and historical records indicated no less than seven structures had been constructed there.

Records indicate the courthouse measured 26 by 22 feet, and was located in the southeast quadrant of the lot. While the remote sensing results indicated buried disturbances in this portion of the lot, archeological stewards found no obvious elements of the building.

“Many of the TASN members are regular TAS field school participants, so it wasn’t too difficult to enlist them to assist with the excavations at San Felipe,” says Pat Mercado-Allinger, the THC’s Archeology Division director. “Fortunately, many of these stewards also served as volunteers during previous investigations, when they searched for evidence of Austin’s colony in the 1990s on private property surrounding the site. This firsthand experience was quite valuable, since they could easily identify the cultural materials being recovered based on their previous experience.”

Since its inception in 1984, the TASN has consisted of a hand-selected group of Texas’ finest avocational archeologists. Currently comprised of 117 members throughout the state, the TASN functions as the eyes and ears of the THC’s Archeology Division. 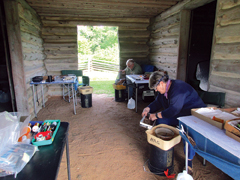 In addition to assisting with the THC excavations, several stewards helped wash, dry, sort, and bag artifacts at the on-site field lab. These TASN volunteers bring many years of experience to the project and work together like a well-oiled machine to sort through the myriad artifacts they encounter for processing.

At the conclusion of each field school, artifacts are boxed up and transported to the THC archeology lab in Austin. There, local TASN members continue to assist with the more-detailed processing and sorting of artifacts.

“With so much experience among this group, it’s easy to see why they are considered such a valued asset to our Archeology Division,” Mercado-Allinger says.

On October 20, the THC and the Friends of the Texas Historical Commission held a ceremonial groundbreaking for the new San Felipe de Austin State Historic Site Museum. The facility, which will be under construction throughout the coming year, will house galleries and exhibits telling the site’s story through artifacts, images, and displays. For updated information, visit the San Felipe de Austin webpages or follow the site on Facebook.

This article was originally published in the Fall 2016 issue of The Medallion.