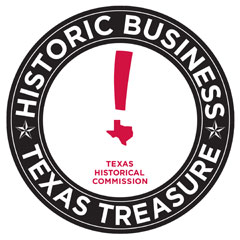 Business is integral to Texas life, culture, commerce, and history. Since 2005, the Texas Treasure Business Award program has recognized companies that are part of Texas history, but not often noted in the history books. Legislation authored that year by State Sen. Leticia Van de Putte of San Antonio and sponsored by State Rep. Charles “Doc” Anderson of Waco provides the Texas Historical Commission (THC) with a designation for businesses that have provided employment for at least 50 years in Texas and offered exceptional historical contributions to the state’s economic growth.

At the Capitol this January, Texas First Lady Anita Perry, along with Sen. Van De Putte and Representatives “Doc” Anderson and Jose Menendez, honored 42 businesses with Senate and House Resolutions, and an award ceremony for six that were newly designated. This event launched the THC’s expanded Texas Treasure Business Award program, offering special recognition through a window decal that identifies a business as a Texas Treasure.

Statewide attention for the award has resulted in numerous elected officials and city leaders recognizing the contribution and impact that long-standing businesses have in their districts and local communities. From high-profile, international businesses to beloved mom and pops on Main Street, historic businesses touch the lives of all Texans. And many have their own interesting stories to tell. Here are two: 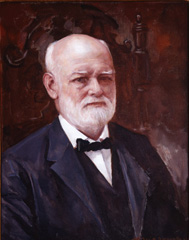 A Texas Treasure of worldwide stature, many people know that Stewart Title Company provides real estate services for consumers and lenders throughout the U.S. and around the world, but not everyone realizes that the business began in Galveston in 1893. Maco, Minor, and Clegg Stewart, sons of state legislator William H. Stewart, purchased the Gulf City Abstract Company and formed Stewart Title Guaranty Company with brother-in-law W.C. Morris. Today, CEO Matt Morris is the fifth generation of William H. Stewart’s descendants to head the company.

Stewart Title is credited with offering the first title insurance in Texas in 1905, in the form of an indemnity against loss due to title claims. By 1908, the company was the first title insurance underwriter authorized to write title insurance in Texas, and opened offices in Dallas, Houston, San Antonio, El Paso, and other cities. By the 1960s, Stewart Title expanded into Arizona, California, Florida, Louisiana, Colorado, and New Mexico. During the 1980s it went global, enhancing geographical information systems and international public records systems around the world. By 2012, Forbes recognized Stewart Title as one of its Top 100 Most Trustworthy Companies in America. 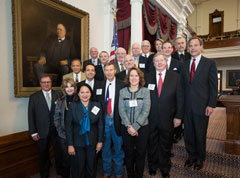 “Stewart is proud to stand among these exceptional companies as a Texas Treasure, and I thank the Texas Historical Commission for this recognition,” said Matt Morris, CEO of Stewart Information Services Corporation. “We’ve thrived here since our beginnings in Galveston in 1893, and are now providing real estate services around the world. For a company to survive for well over a century is unusual, to say the least, but we’re looking forward to continued success and economic productivity in Texas and around the world for many years to come.” 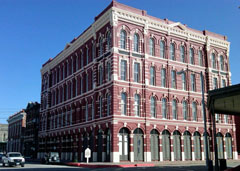 Stewart Title has preservation history to brag about as well. During the National Trust for Historic Preservation’s 1979 National Historic Preservation Week (which eventually became Preservation Month in May), the company received an award for restoration of the 1882 Stewart Building in Galveston. The building, designed by architect Eugene T. Heiner in the Italianate Renaissance Revival style, is the tallest building on the island to survive from the 19th century. Stewart has occupied the building continuously since 1905, although corporate headquarters is now in Houston. Stewart Title has supported restoration of other Strand buildings and assisted with the 1969 installation of gas street lamps and the establishment of The Strand National Historic Landmark District, one of the legendary heritage tourism destinations on Galveston Island. 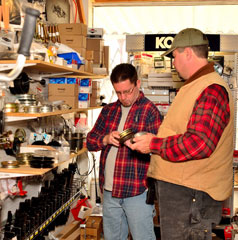 In Winnsboro’s historic Main Street district, one Texas Treasure business demonstrates what it takes for a hardware store to survive 100 years. R.H. McCrary Hardware Store, a family owned business since 1912, was honored with the Texas Treasure Business Award on its 100th anniversary. One secret of its success may be civic involvement and an understanding that keeping the heart of the city vital helps sustains the social, environmental, and economic vitality of the whole community.

“Winnsboro is fortunate to have such an iconic business located in our downtown Main Street district,” says Winnsboro Main Street Manager Denise Miranda. “Shirley Watters, co-owner of McCrary's Hardware, is a preservationist who brought the community together to consider the Main Street Program. With hard work and perseverance, she got the City Council behind the project. Mrs. Watters was elected Chamber of Commerce "Woman of the Year" in 2004 for these efforts, and Winnsboro celebrates its 10th year as a Main Street city this month.” 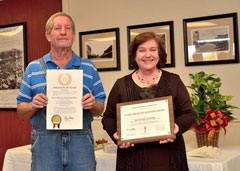 Civic activity is a McCrary family tradition. Founder R.H. McCrary served two terms as mayor of Winnsboro, and took pride in his store and his friendly way of doing business. He was a member of the school board, and was involved in highway planning, development, and water conservation. The Winnsboro Chamber of Commerce named him Man of the Year in 1958 for all his time given to the development of Winnsboro.

Creativity and adaptability were requisite characteristics of the business—at one point, the hardware store even had a mortuary business upstairs with a trap door that was used to raise and lower caskets! Additionally, McCrary started selling furniture and housewares in the 1920s, as the hardware store expanded into a local institution.

Now in its third generation of family ownership, Robert and Shirley Watters have had to move to another historic building downtown for the additional space needed to accommodate the growing business. The name, ambiance, and hometown customer service will keep McCrary’s a Winnsboro icon for generations to come.

I would like to find out how we can nominate the Hill Country Arts Foundation as a Texas Treasure. It is an art center near Kerrville that has been in operation for 54 years. In 2014 it will celebrate it's 55th year of continuous operation. We have 13 acres on the Guadalupe River, a 722 seat outdoor stage (where plays are produced each summer), a 150 seat indoor theater, art studios and a gallery. We are a 501 (C)(3) non-profit organization. Please let me know what I need to do to bring this treasure to your attention. Thank you, Brenda Harrison, Ph.D., Executive Director of Hill Country Art Foundation

Great question, Brenda, and thanks for getting in touch. While we value the tremendous historical contributions of arts and preservation organizations to the state, counties, and individual communities, this award was created by Senator Van de Putte and Representative Anderson in 2005 to recognize for-profit businesses. Many nonprofit organizations and volunteers have received other THC preservation awards such as the Governor’s Award for Historic Preservation, the John L. Nau, III Award of Excellence in Museums, and the Award of Merit. Learn more about those awards here.

Awards for volunteerism and nonprofits are also bestowed at the Texas Nonprofit Summit.