A Tale of Two Cemeteries 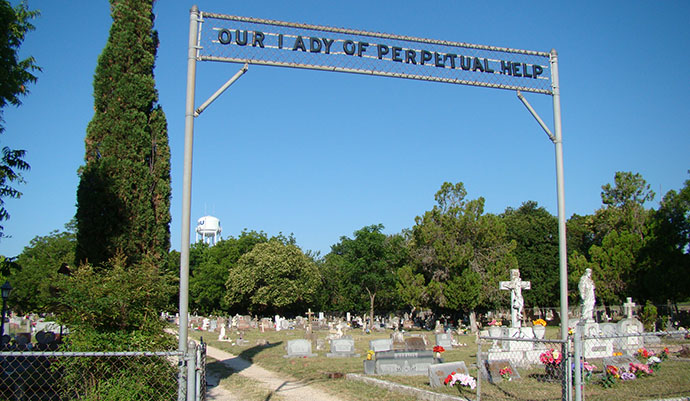 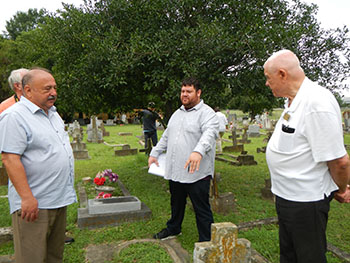 For decades, the Comal CHC’s dedication to its German roots has produced a wide variety of cultural and architectural preservation accomplishments. Today, though, the CHC reps were not showcasing German-Texan heritage, but the undertold story of Mexican Americans living in the area. The group hopes to resurface this previously untold account and fill a large hole in the county’s narrative concerning Mexican Americans by researching and documenting Our Lady of Perpetual Help and Panteon Hidalgo cemeteries.

The THC caught its first glimpse of these efforts in 2018, when the Comal CHC submitted a Historic Texas Cemetery designation application for Our Lady of Perpetual Help Cemetery. Staff learned about the full scope of the project through the Comal CHC’s 2018 annual report to the THC.

The annual report is vital in updating the THC on current preservation efforts occurring in counties across Texas, as well as sharing the future goals of a CHC. The updates also provide an opportunity for the THC’s CHC Outreach team to find resources and assistance for CHCs. 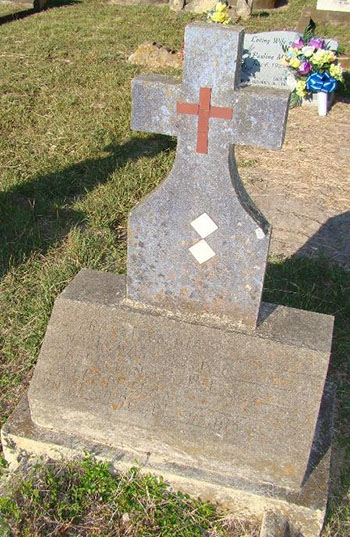 The Undertold History of Mexican Americans in New Braunfels

Former Comal CHC member Estella Farias kick-started the effort when she began researching her parents’ lives. Both first-generation Texans, the Delgados were children of Mexican laborers in search of a better future.

Felipe and Elisa settled in New Braunfels and established a dance hall, baseball field, and park that broke cultural and racial barriers for Mexicans and Mexican Americans in search of inclusion in the German-Texan dominated region. Farias’ work culminated in an Undertold Marker in 2016 for the city’s West End Park and Dance Hall.

Inspired by the Hispanic community’s support of her parents’ work, Farias became interested in documenting the genealogical history of Hispanics living in Comal County. Farias and her husband looked to Our Lady of Perpetual Help and Panteon Hidalgo cemeteries as sources of information for her research. Her work, though, would be daunting for any individual to do alone.

Cemeteries, big and small, present a host of challenges for preservationists. Problems include developing strategies on how to conduct a cemetery preservation project, deciphering eroded markers, and researching documents related to burials.

So how did Farias approach her genealogical challenge? She recruited volunteers from the community and the Comal CHC for support, who approached the task by compartmentalizing the tasks ahead into manageable responsibilities for individuals to carry. 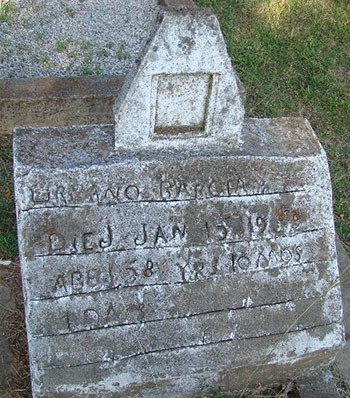 First, Farias needed official records of some sort to begin researching the history of Mexican Americans in New Braunfels. Enter Comal CHC members and volunteer researchers, who dug through census records dating back to 1880 to discover names of Mexican Americans living in the town.

A fire destroyed the 1890 U.S. census records, but the city had attempted to reconstruct the census data through property records. However, the Comal CHC recognized that not all residents would be accounted for because not all Mexican Americans were property owners. Volunteers then combed through newspaper obituaries and death records for additional names.

Another great source of history was in the Morales Funeral Home records. Although the funeral home closed in 2006, it served the New Braunfels community for more than 80 years and still held records for many of the people buried at Our Lady of Perpetual Help and Panteon Hidalgo cemeteries.

Typically, these are privately owned business records, but they chronicle important information that may be unavailable through official public records. The material helped researchers construct the biographies of Mexican Americans living in New Braunfels and share their stories. Volunteers digitized the funeral home documents, so they could be entered into a database and compared with the public death records of both cemeteries to discover missing names, graves, and markers. 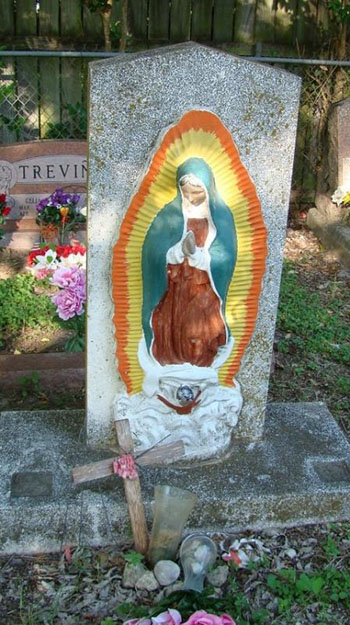 Led by Cemetery Committee Chair Wilfred Schlather, the Comal CHC was successful in mapping the cemeteries. He started by organizing aerials of the grounds through Google Maps. He created a map of each cemetery, split the maps in half, then subdivided both further into roughly four rows of burials per section.

He then labeled every discernible grave within a sector with a number. Comal CHC members Joe Ayala, Ramiro Ayala, and other volunteers then took a segment each and methodically recorded each name, birth, and death date from the markers.

Their surveys also included documenting burials missing from Schlather’s maps because they either lacked a marker or were hidden from aerial photos by foliage. They compared the information with their listed names to assess whose grave markers may be physically missing or deteriorating in the cemeteries.

An example of the maps’ benefits recently occurred when the Comal CHC assisted an artisan in finding the grave of a World War I veteran in need of a new headstone. The Sophienburg Museum and Archives stores the data for family members and researchers to trace their familial roots.

With so much information collected, the Comal CHC contacted the THC’s Cemetery Preservation Program to designate each site as a Historic Texas Cemetery (HTC). Through this process, deed research revealed that Our Lady of Perpetual Help and Panteon Hidalgo were two different cemeteries, despite their proximity. Farias, along with Karen Boyd, began researching each historic burial ground for their histories.

Our Lady of Perpetual Help Church began in 1926 when the Catholic Church in New Braunfels requested priests to work alongside the sizable Mexican Catholic population. A cemetery of the same name started five years later.

Volunteers collected records from the Catholic Archives in San Antonio and compared with those stored in the Sophienburg database. They also learned more about the cemetery’s layout. The grounds reflect a traditional Catholic design with sections for individuals, the clergy, families, and children.

Markers appear to be designed by craftsmen and contain inscriptions that are easy to decipher. Interviews with family members of individuals add additional information to the narrative. With this information, the Comal CHC obtained HTC designation for Our Lady of Perpetual Help Cemetery in 2018. They were awarded an Undertold Marker in 2019.

The next step is designating Panteon Hidalgo as an HTC. Panteon Hidalgo’s history is less documented because a fire at the caretaker’s home destroyed most of the records.

Many of the markers appear homemade, suggesting less-affluent people were buried there. Faint or illegible inscriptions also indicate they were scratched in as the concrete dried. Individual, infant, and child burial plots far outnumber family sections.

Another interesting tidbit is the spelling of names. Last names like “Garcia,” “Rodriguez,” and “Gonzales” found in Hidalgo are spelled as "Garsia,” “Rodriges,” and “Gonsales.” Some are spelled with a backward “S” and “J” too. The Comal CHC hopes to find more information concerning the uniqueness of Panteon Hidalgo in its efforts to designate it as a Historic Texas Cemetery. 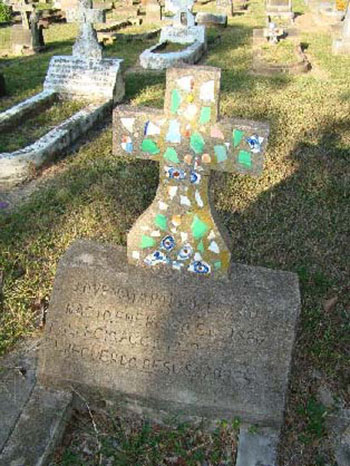 Step Four: Fill the Hole in the County Narrative

The well-documented history of Our Lady of Perpetual Help and the developing history of Panteon Hidalgo represent a positive start in telling the tale of Mexican Americans in New Braunfels. However, the HTC designations are only part of the overall goal for the Comal CHC.

New burials continue at both cemeteries, so continued name collection is essential to maintain the history of each cemetery. The volunteer group is also planning their next step, which will include photographing each marker to help genealogists and researchers see the graves at the Sophienburg Museum and Archives.

The Comal CHC met with Hammons on that humid day last summer to show how teamwork and collaboration were essential in their preservation work at Our Lady of Perpetual Help and Panteon Hidalgo cemeteries. They hope that by sharing their step-by-step process and current successes, other volunteers and preservation groups may understand their roles in collaborating toward a common goal. For the Comal CHC, the goal is to fill a hole in the written narrative of Mexicans and Mexican Americans in New Braunfels through a multi-year research and preservation effort.

For Estella Farias, her ongoing work to tell the undertold story of her community is motivated by gratitude. She believes it’s the least she can do to show her appreciation to a community that once supported her parents’ dreams of improving the quality of life for Hispanics in Comal County.