A natural escape in Texas can mean many different things, but it’s a distinctive sensation in the Forest Trail Region. Instead of mountains, beaches, or canyons, there are trees. Lots of trees.

“The forest country has a natural rhythm. Things are a little slower, you breathe a little deeper, and connecting with family and friends is just a little bit easier,” says Marty Prince, former executive director for the Texas Forest Trail Region. “Our woods are a sanctuary, an escape from billboards and traffic jams. Schedules and spreadsheets don’t matter much under a cathedral of eight-story pines. It’s a wonderful getaway.”

This year, the Forest Trail is joining the THC’s other nine statewide regions in celebrating the 50th anniversary of the Texas Heritage Trails Program (THTP). Prince is enthusiastic about the THTP’s birthday and its Stay an Extra Day Sweepstakes.

“Some unlucky souls still imagine Texas as all desert and cactus—breaking the tumbleweed stereotype is a point of pride for us,” Prince says. “From the world’s largest cypress grove, to the state’s last wild river, East Texas is one of nature’s best secrets. Stay an extra day in the Forest Region—you’re never more than an hour away from something incredible.” 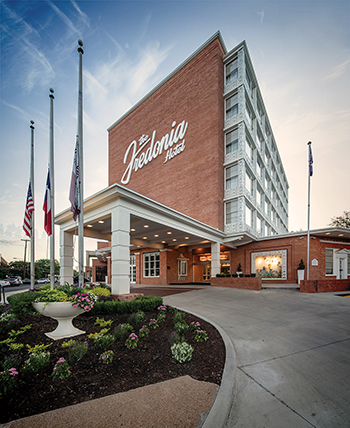 Prince is based in Nacogdoches, which has long billed itself as the oldest town in Texas, based on Caddo Indian and colonial settlements in the area. The Camino Real de los Tejas traverses the community, allowing locals to claim they’ve been welcoming travelers to the region for more than 1,200 years. These days, visitors can choose from many heritage tourism destinations that help tell the stories of the area’s multi-faceted history.

State Rep. Travis Clardy, a Nacogdoches resident, proudly touts the community’s newest downtown restoration project, the stunning Fredonia Hotel as an example of its historic vibrancy. The 1955 mid-century modern masterpiece offers travelers a home base in the Main Street district within walking distance of increasingly expanding destinations like restaurants, coffee shops, and bars.

“I think we’re going to see an emergence of history-based travel around here—this is the most beautiful and historic part of the state,” Clardy says. “We’re preaching the gospel of Nacogdoches and East Texas, but I’m just a minor prophet.”

Nacogdoches Main Street’s Amy Mehaffey notes the Fredonia’s recent re-opening has been a catalyst for several new businesses to open in the historic downtown area. Additionally, existing businesses have extended their hours to accommodate guests and locals who stroll the streets after dinner. 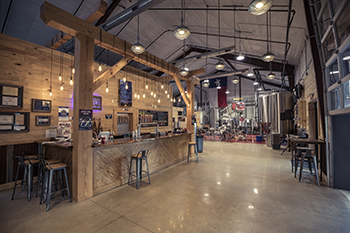 “We’re starting to see the footprint of downtown expand, which is wonderful. It used to be defined as just the areas with red brick streets, but now businesses and services are moving beyond those traditional borders,” Mehaffey says.

Not historic but drawing a large number of heritage travelers is the Fredonia Brewery, just a block north of downtown. Founders Vince Beard and Paul Murray are Nacogdoches natives who opened the 15-barrel brewhouse in March 2017. Their shared love of beer and local history is evident in the traditionally constructed pine taproom and the beers, including Pine Cove Porter and Nine Flags Amber Ale. Even the brewery’s name and tagline reference the local Fredonia Republic of 1826–27: “Brewed with the independent spirit that created Texas.” 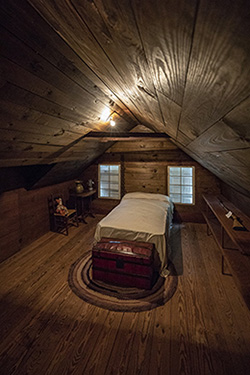 “We love our hometown and all the great stories about its important role in Texas history,” Murray says. “It’s really cool to think that Sam Houston and Davey Crockett once walked where our taproom now stands.”

Beyond downtown, visitors are drawn to heritage attractions like the 1830 Sterne-Hoya House, the oldest home in Nacogdoches remaining on its original site. The home was built for Adolphus Sterne, a prominent leader of the Texas Revolution, and hosted many high-profile guests, including Houston, who was baptized into the Catholic faith here as an adult. 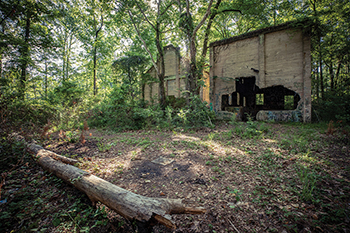 After exploring Nacogdoches, venture further into the Texas Forest Trail Region to learn more about its namesake piney woods. One of the best ways to experience this intersection of history and timber is at the Aldridge Sawmill ruins in Angelina National Forest, roughly 50 miles southeast of Nacogdoches.

Like other regional lumber towns, Aldridge was once abuzz with activity, with hundreds of homes, several churches and schools, a commissary, and saloons. During its brief heyday (roughly 1905–20), Aldridge produced nearly 100,000 board feet of yellow pine lumber daily. Aldridge’s only remnants are the enormous and stark concrete walls of former mill facilities, now offering an eerie juxtaposition to the surrounding natural beauty of this enchanting forest. Listed in the National Register of Historic Places, Aldridge is a surreal and compelling destination, with trees growing in and alongside graffiti-covered walls that are slowly being reclaimed by a forest they once helped decimate. 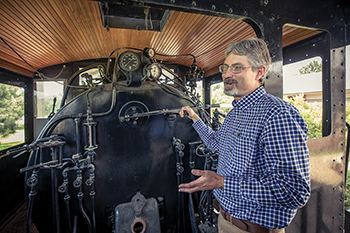 Drawing the most attention is a 68-ton Baldwin 10-wheel locomotive built in 1920. Visitors of all ages will feel an intrinsic thrill while pulling the engine’s steam-whistle rope and hearing the resulting full-throated sonic blast. The History Center also contains an extensive archive and research facility with more than a million photos and more than 2,000 cubic feet of manuscripts and records.

“What sets us apart is that we’re not as interested in what was on the walls of a historic building—we want to focus on what was in the desk drawers,” says Museum Director Jonathan Gerland.

East Texas’ natural resources are also on display just up the road at Lufkin’s Texas Forestry Museum. According to Museum Director Kendall Gay, the facility traces its origins to the century-old Texas Forestry Association; it now offers dozens of exhibits and hundreds of artifacts dedicated to the region’s lumber industry. Highlights include vintage sawmill equipment, a historic Forest Service truck, and an outdoor exhibit including a 100-foot-tall fire lookout tower from 1936.

Just a couple miles away is historic downtown Lufkin, one of the longest-serving participants in the THC’s Texas Main Street Program. Heritage travelers are drawn to downtown’s mix of restaurants, civic buildings, and antiques stores. A walking tour reveals the city’s distinctive history—maps are available at Lufkin City Hall. Highlights include the 1925 Pines Theater, the first Brookshire Brothers grocery store, and colorful local artwork at Cotton Square Park.

While in the Forest Trail Region, be sure to stop by one of the THC’s historic sites—Alto’s Caddo Mounds  and San Augustine’s Mission Dolores. To discover more heritage travel destinations, download a free copy of the Texas Forest Trail Region travel guide. 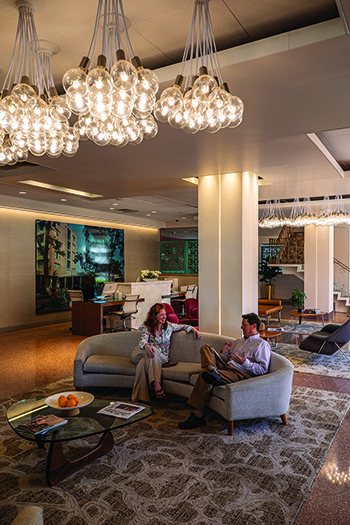 Towering over downtown Nacogdoches is the stunning six-story Fredonia Hotel. Deemed “as modern as an atomic submarine” when it opened in 1955, the Fredonia offered contemporary architectural style with French Creole accents in its decorative ironwork.

The hotel recently received an extensive renovation, thanks to the efforts of the local DeWitt family and assistance from the THC’s Texas Historic Preservation Tax Credit Program, which provided 25 percent of eligible rehabilitation costs.

“Working with the THC was essential for this project,” says Bud DeWitt, the hotel’s assistant general manager. “The THC helped us keep the historic integrity of the building. This is a community project, but we needed help to do it correctly and the THC stepped up to make that happen.”

Adds Nacogdoches-based State Rep. Travis Clardy, “I think the THC’s tax credit program was integral in the decision to buy and restore this historic property. I get chills and goosebumps just thinking about what a fabulous venture this has become.”

“Guests step back in time when they stay here—it’s like hanging out with Frank Sinatra and the Rat Pack,” says John McLaren, general manager. “People come here and end up staying an extra day because it’s within walking distance of so many other destinations in our historic downtown.”

Clardy concurs, noting that the Fredonia restoration project resulted in nearly 100 jobs for the community and served as a catalyst for new businesses in town. He adds that the hotel has been an “economic driver” for Nacogdoches.