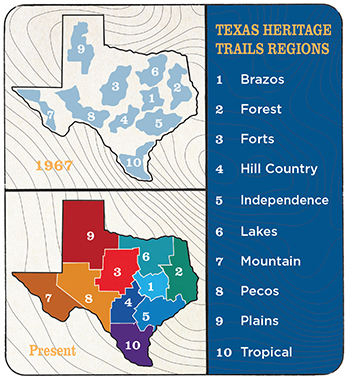 Throughout the year, you may have heard about the Texas Historical Commission’s 50th anniversary celebration of the Texas Heritage Trails Program (THTP). As part of the commemoration, the agency is hosting a 10-month-long sweepstakes with prize packages offering travel getaways—one to each of the 10 trail regions. Enter at extradayintexas.com.

The Stay an Extra Day Sweepstakes encourages travelers to go beyond the higher-profile destinations and explore the state’s diverse regions by staying an extra day and experiencing another aspect of an area’s history and culture.

But where did this “extra day” idea originate?

In the mid-1960s, Texas Gov. John Connally commissioned a Texas-image marketing survey, which revealed many Americans thought Texas merely contained deserts, oil, and cactus. Connally’s efforts to improve the state’s image included a May 1967 presentation in Austin, where he asked the audience to consider that if tourists could be persuaded to stay only one more day, it would bring an additional $188 million to the state’s economy. 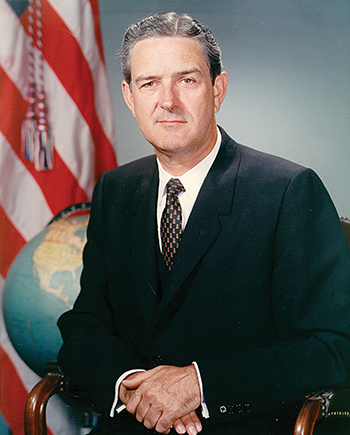 He added that a regional heritage trail campaign would “bring new economic hope to the door-step of small towns and out-of-the-way points all over the state.” In a follow-up press memo he said, “What I see for the future is a series of what might be called Travel Trails of Texas.”

“The Heritage Trails bring visitors to Texas sites and communities, increasing tourist dollars and hotel stays, and getting folks excited about historic preservation,” says the THC’s Teresa Caldwell, state coordinator of the THTP. “Increasing interest in visiting the past can yield an economic bonanza if we’re diligent in preserving and promoting our authentic places and their stories.”

With this in mind, we offer the following travel suggestions for each of the THTP’s 10 regions. After you’ve visited a region’s most-famous attraction or returned to your favorite restaurant, consider spending some additional time at one of these destinations or research your own ideas from among the thousands at texastimetravel.com. 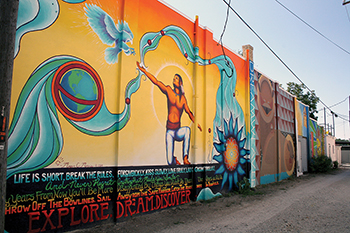 The Brazos Trail is an 18-county area of Central Texas. Visitors to the region may already be familiar with Waco’s Magnolia Market or College Station’s George H.W. Bush Presidential Library, but if you stay an extra day…

You can visit Clifton, 35 miles northwest of Waco, where off-the-beaten-path attractions include Art Alley, featuring bold murals on downtown buildings. Nestled in the alley is the Cell Block, a former jail cell from the 1930s now serving as single-occupancy upscale lodging. Those seeking fine dining in Clifton can walk to Sinclair, housed in a former 1922 gas station.

Spanning 35 counties from the Oklahoma-Arkansas border to the Gulf of Mexico, the Forest Trail Region is known as the “Gateway to Texas” for the many cultural groups who entered Texas from the east.

Travelers with a day to spare can go to Kilgore, 26 miles east of Tyler. Nearly a century ago, the community boasted 1,200 oil derricks within its modest city limits. The Kilgore Historical Preservation Foundation reconstructed nearly 50 to recreate the town’s sense of place, with many erected downtown on the original site of the “World’s Richest Acre.” Across town, the East Texas Oil Museum chronicles the extraordinary impact of the East Texas Oil Field on the region.

The Forts Trail is comprised of 29 counties in Central West Texas, with highlights including a Spanish presidio and eight historic frontier forts.

In Sweetwater, 40 miles west of Abilene, the U.S. Army Air Forces turned the local airport into Avenger Field; during World War II, it served as the only all-female air base in history. More than 1,000 Women Airforce Service Pilots (WASP) served stateside, and their legacy is honored at the National WASP WWII Museum in the airfield’s 1929 Hangar One.

The Hill Country Trail is a geographically diverse 19-county area in Central Texas that abounds with natural resources—from tranquil lakes and rivers to canyons, and roadways hewn from the natural limestone.

Located about 90 miles southwest of Fredericksburg is the small community of Concan—for decades, it’s drawn visitors seeking respite from the daily grind and summer heat. Spend a day or weekend at Neal’s Lodges on the cool, clear Frio River, where you can rent cabins and tubes, or explore dramatic cliffs and river trails on foot. Neal’s Lodges was founded in 1926 and features a historic dining hall and dozens of cabins, camping sites, and lodges overlooking the Frio Canyon. 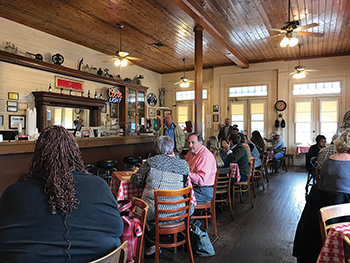 The bustling city of Victoria offers vibrant options for heritage travelers, including the 1892 Victoria County Courthouse, a towering Romanesque Revival structure designed by renowned Texas architect J. Riely Gordon. Other downtown sites of note include the 1904 neo-Gothic St. Mary’s Catholic Church. Just around the corner, a THC marker adorns the 1882 Fosatti’s Delicatessen, which claims to be the oldest deli in Texas.

Often overlooked is the unassuming city of Wichita Falls. In the late 1800s, its Wild West exploits earned it the nickname “Whiskeytaw Falls.” While there, visit the unexpectedly charming Pro Wrestling Hall of Fame and Museum. Located on the ground floor of the 1919 First Wichita National Bank building—now known as Big Blue due to its mid-century modern façade—the museum showcases dozens of wrestling greats from across the country.

Adventure in nature awaits in the Texas Mountain Trail Region of Far West Texas where visitors can see land as the American Indians and ranching pioneers saw it.

About 90 miles east of El Paso lies the community of Sierra Blanca, historically known as the site where one of the first southern transcontinental railroad lines was completed in 1881. The community boasts the only adobe courthouse in Texas—the 1922 Hudspeth County Courthouse—with 18-inch thick walls insulating the building from the harsh desert environment. Just south of the courthouse is El Paso Street, the local name for the Bankhead Highway, which still offers a remarkable reflection of highway travel during the 1930s–50s.

Experience the legendary Wild West of classic books and movies, and the real-life landscape of the Texas Pecos Trail Region.

About 30 miles west of Odessa, Monahans Sandhills State Park consists of 3,840 acres of sand dunes, some up to 70 feet high. Buy or rent a sled for some low-key sand surfing. A couple hours to the south, Iraan offers Alley Oop Fantasy Land with several large reproductions of the legendary comic strip’s characters, including Alley Oop and his pet dinosaur Dinny. 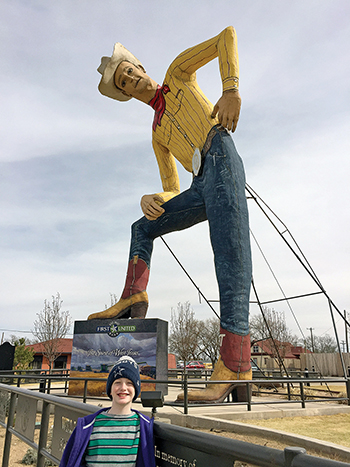 Many people visit Palo Duro Canyon State Park without stopping by the nearby community of Canyon. One of the region’s premier photo ops is the Tex Randall statue, constructed in 1959 to advertise a Western store. This 47-foot-tall cowboy was restored in 2016 by Canyon Main Street volunteers. Fuel up or wind down from a canyon hike at nearby Imperial Taproom, where you can order a local beer and a hearty burger or sandwich in the historic downtown.