Texas to Observe 'War to End All Wars' 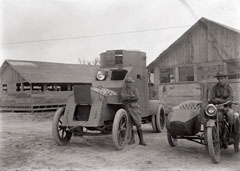 On April 6, 2017, Texans will observe the 100th anniversary of America’s entry into World War I. The war had a profound impact on the United States and Texas. While causing great loss for many, it also positioned the United States to become a world power in the 20th century.

Texas, by virtue of its distinguished role in the war from 1917 to 1919, was once home to thousands of veterans who enlisted or were drafted into service. Moreover, tens of thousands from across the nation were assigned to posts throughout the Lone Star State, which hosted dozens of training facilities.

In observance of the centennial anniversary, Gov. Greg Abbott directed the Texas Historical Commission (THC) to serve as the lead agency to commemorate the role Texas played during World War I. The THC’s Texas First World War Centennial Commemoration will officially observe a period from April 6, 2017 (the U.S. Declaration of War on Germany) through June 28, 2019 (signing of the Treaty of Versailles that ended the war between the Allied powers and Germany).

Today, generations after the end of World War I, evidence of that era and reminders of its impact on Texas can still be found. The war’s enduring influence is obvious in honor rolls, monuments, and historical markers; at active military installations, such as San Antonio’s Fort Sam Houston and El Paso’s Fort Bliss; and at county and state parks such as Galveston’s Fort Travis and La Porte’s Battleship Texas State Historic Site.

The THC’s commemorative efforts will educate Texans and honor the Lone Star State’s World War I experience. Three initial projects include a new, dedicated page on the agency’s website, a mobile-app tour, and a request of the public to help determine where World War I is interpreted or preserved in Texas. 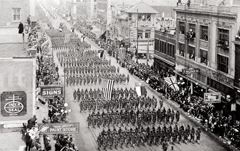 In 1917, Texas responded impressively to the national war effort. Approximately 989,600 Texans registered for the war, and according to the Texas Veterans Commission, 198,000 Texans served in the military (including 450 Texas women as nurses). Three Texans earned the Medal of Honor.

Tragically, at least 5,246 Texans died in service. Their tombstones stand in France and in urban and rural cemeteries across Texas.

Texas’ World War I-related military presence is noteworthy. Texas and Oklahoma fielded two full-strength infantry divisions: the storied 36th and 90th. Texans also made up a portion of a third division (the 42nd) while serving in additional units that formed, trained, and deployed in Texas and across the nation.

In addition, Texas hosted 19 U.S. Army posts, of which at least nine served as military training camps. These garrisons were joined by another nine military training airfields—several of which helped train British and Canadian flying cadets. The U.S.S. Texas (BB-35), a dreadnought-era battleship (the principal type of early 20th-century warship) served in the Atlantic Ocean, joining the 6th Battle Squadron of the British Grand Fleet in 1918. Today she is berthed along the Houston Ship Channel, adjacent to the San Jacinto Battleground.

Texas was a segregated state in 1917, so there was little public consideration for civil rights and equal employment opportunities. However, women and minorities still contributed to the war effort in both military service and home-front production.

On the home front, Texans primarily lived on farms and ranches or in small towns, yet they responded to the nation’s call to support the war effort with Liberty Bond drives and Red Cross training. Manpower shortages and increased wartime needs opened up new employment opportunities for Texans. Farm families and small-town residents moved to major cities to work in war industry plants and at military posts. Those who returned home after the war found, in many ways, a new and dynamic Texas.

County Historical Commissions and like-minded preservationists can help the THC create an inventory of locations housing World War I-related exhibits, archives, trophy artillery, memorials, markers, and monuments. The information culled by this request for assistance will benefit not only heritage tourists, but historians and public school students actively conducting research during the centennial.

While the THC honors the service of individual veterans, this is not a call for information on where every uniform, helmet, or medal might be held in family or private collections; rather, the agency is attempting to determine where heritage visitor-accessible sites are located.

Email information to TXinWWISurvey@thc.texas.gov, noting what resources are located in your community. If possible, include a photo, the street address, or GPS waypoint for the location of the resource. You can also mail information to:

An exciting travel-friendly resource is already underway. The THC’s Heritage Tourism program is developing a new mobile tour about World War I on the Texas Home Front, scheduled to launch in early 2017 in time for the centennial.

“We’re excited to highlight the World War I home-front history that may not be widely known by Texas residents or visitors,” said Brad Patterson, director of the THC’s Community Heritage Development Division. “It’s exciting to connect folks with this info during the centennial of this important conflict.”

Additional World War I commemorative efforts have been organized at the national and state levels in honor of the “Great War.” The U.S. World War I Centennial Commemoration Commission will plan, develop, and execute programs, projects, and activities to commemorate the centennial of World War I.

Statewide, the Texas World War I Centennial Commission was created by volunteers with a passion for preserving the history of Texas’ involvement in the First World War. Since 2015, the organization has actively engaged local stakeholders, including museums, civic and veteran groups, historic sites, academic institutions, military bases, and more. To learn more, visit
thc.texas.gov.

This article was originally published in the Summer 2016 issue of The Medallion.