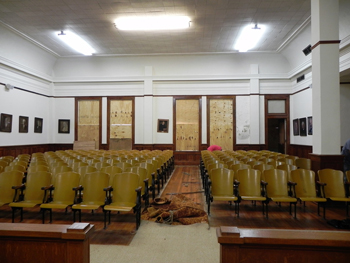 When Hurricane Harvey made landfall on the Gulf Coast last year, it left between an estimated $90 billion and $160 billion worth of damage, according to the National Hurricane Center’s report released last week. The report takes stock of just how big, damaging, and deadly the Category 5 storm was, declaring Harvey “the most significant tropical cyclone rainfall event in United States history,” with more than 300,000 structures flooded.

While we’ve been keeping the public up to date on several of our state historic sites impacted by the storm, hundreds of other public and privately-owned historic buildings and resources throughout the state-declared disaster area sustained considerable damage. In response, the THC decided to offer an emergency round of our Texas Preservation Trust Fund (TPTF) to address the catastrophic destruction, creating the first TPTF grant cycle to allocate funding exclusively for historic places affected by a natural disaster. The THC selected six projects—one archeological resource and five historic properties—to receive emergency grant funding.

The Heritage Society at Sam Houston Park, a nonprofit with a mission to tell the diverse stories of Houston’s history, houses more than 23,000 artifacts that document life in the city from the early 1800s to the mid-1900s. One collection focuses specifically on artifacts from the Civil War era, while the remaining two span the 19th and 20th centuries. Several artifacts date to at least 1847, and possibly to the establishment of Houston in 1836. Sadly, all three archeological collections were damaged by Hurricane Harvey. The TPTF emergency grant will cover the cost to organize and safely store the artifacts, as well as provide for the transfer of the held-in-trust collections to the Center for Archeological Studies in San Marcos where they will be stored during restoration efforts. 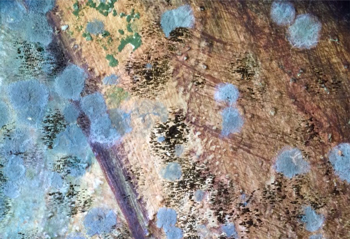 The 1953 mural by artist John Biggers, Contribution of Negro Women to American Life and Education, is housed in the Blue Triangle Community Center—a Recorded Texas Historic Landmark. As a result of unprecedented water infiltration from Hurricane Harvey, Biggers’ Mural is now covered in hundreds of black mold sprouts and is at risk of losing many areas of the original painting if extraordinary conservation efforts aren't pursued. Our emergency grant will help the YWCA fund a planning project for the building’s rehabilitation needs, engage professionals, and move forward with the mural's restoration.

Before the Mary Christian Burleson Homestead sustained significant roof damage from Harvey, restoration efforts were already underway in hopes of applying for a Recorded Texas Historic Landmark (RTHL) designation and National Register of Historic Places listing. To that end, the homestead received development grant funding from last year’s TPTF cycle, but are now unable to begin the approved work for the previous grant until damage from Harvey is addressed. The emergency grant will help the Homestead repair the roof damage—which made the entire structure unstable—and eventually move forward with restoration efforts that were underway prior to Harvey. 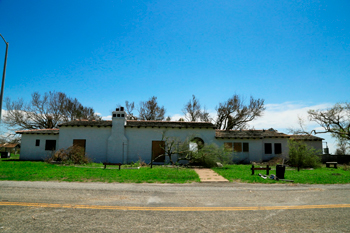 The Recreation Hall at Goose Island State Park, constructed in 1935, is one of the first Civilian Conservation Corps buildings in Texas. When Hurricane Harvey passed through Rockport, the cedar shingle porch roof was completely blown off. The funding will assist the Texas Parks and Wildlife Department with its repair efforts and make the park eligible for the National Register once again.

The Lee County Courthouse was fully restored through the THC's Texas Historic Courthouse Preservation Program (THCPP) in the first round of grants beginning 20 years ago. During Hurricane Harvey, the courthouse experienced water infiltration through the roof, walls, and windows, creating an urgent need for remediation. The emergency grant from the THC will help meet many unmet needs, including flashing replacement, limited metal shingle and panel replacement, masonry repointing and Dutchman repairs, and wood window repair.

The Refugio County Courthouse suffered direct damage from Hurricane Harvey with more than 30 destroyed windows, water infiltration through the roof and walls, and structural movement resulting in two-inch cracks in the exterior masonry. The courthouse has an approved, though outdated, master plan which is required for participation in the THCPP, but the plan does not address current county needs or hurricane damage. The grant will fund a feasibility study for the county to determine the best course of action for repair and restoration of the historic courthouse.

The TPTF was created by the Texas Legislature in 1989 to be awarded on a yearly basis. Grant applications for the Fiscal Year 2018 were received by the THC on November 30, 2017, and announced at the THC’s quarterly meeting January 30, 2018.