Texans captured after the Dawson Massacre and the Battle of Mier—including those that drew white beans—were eventually imprisoned in Castle San Carlos de Perote in the Mexican state of Veracruz. While a few managed to escape Perote Prison, most were not liberated until September 1844. Forty never saw Texas again, dying either in or en route to prison.

A handful of accounts recall Republic of Texas soldiers’ experiences during the Dawson and Mier expeditions, as well as their imprisonment in Mexico.

Thomas Jefferson Green, second in command of the Mier Expedition, published his account in 1845. Green made several references to meals and drinks prepared with their rations. Among these meals was “the very best dish we had yet cooked.”

“Respecting our rations, they were such, even without labour, as would hardly have kept soul and body together. We fortunately had a small balance of funds still by us, which had been so kindly furnished us by our friend J. P. Schatzell, and Mr. Marks, the United States vice consul in Matamoros…We also purchased sugar and coffee, and every day, at twelve o'clock, from the milkman, a gallon of leche de burra, ass's milk. When we had the means, all of our mess took a hand at cooking. Our old sailing-master, Lyon, did the outdoor catering, browned the coffee, and superintended its grinding. A soldier's wife would grind it upon a flat stone, for which she would receive toll. Daniel Drake Henrie, of whom we shall have to speak more hereafter, usually called Dan, for short, sat upon the stone with a small Indian fan, and blew the coals, while he sung 'Long, long ago,' and the 'Soldier's Tear.' Colonel Fisher would hash up the meat; Captain Reese would stand by Dan, spoon in hand, and stir the milk, to keep it from boiling over; Lieutenant Clark would beat up the peppers and peel the potatoes, while I would cut up the onions and mix in the condiments. After frequent tastings, when I would pronounce the thing right, all hands agreed that 'this was the very best dish we had yet cooked.' Thus a keen appetite made each last dish the best. Each of the mess, like artisans in a pin factory, had his separate office to fulfil, but the fulfilling of that office depended upon his first washing his hands; for as yet we were not so accustomed to the voracity of the vermin as not to make war upon them.”

Excerpt from the Journal of the Texian Expedition Against Mier: Subsequent Imprisonment of the Author, and Final Escape From the Castle of Perote (1845) by Thomas Jefferson Green. 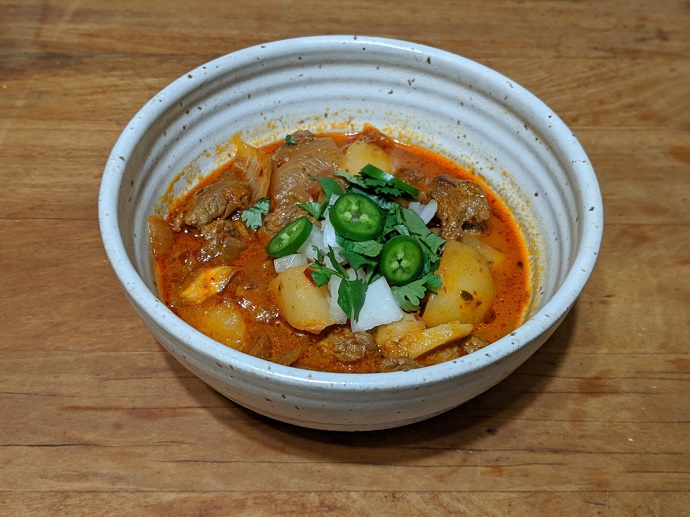 *Since not specified, we took some liberties in determining which “condiments” to include. 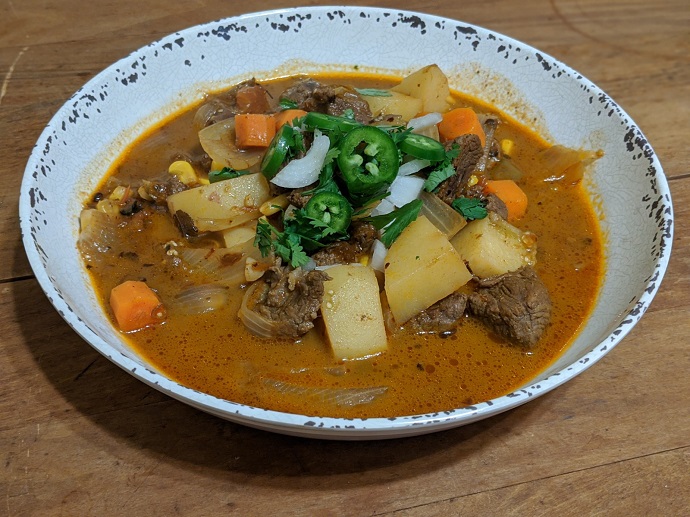 Our staff and volunteers like our stew with a few more vegetables and flavors. While still inspired by the meal prepared at Perote Prison, this stew is a little more complex…perhaps for those who aren’t limited by prison rations.