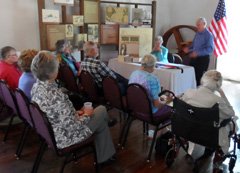 The Friends of the Landmark Inn hosted a book signing at Landmark Inn State Historic Site on April 14 for authors Edward and Shirley Wright, who spoke about their book Todos Santos (All Saints).

A historical narrative with tales of bravery on the Texas frontier, the book is based on the lives of two Scottish families who immigrated to Texas in 1850. According to Edward Wright, Todos Santos is woven from bits and pieces of family history and mid-19th-century historical events. Wright explained that the story evolved as he pieced together his genealogy. Hearing stories about the Ridgeway and Parks families from his grandmother, he often wondered why they left Scotland. 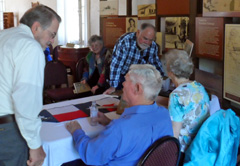 Shirley Wright engaged the audience by reading several passages from the book. The story begins in 1850s Scotland and follows the families as they flee the potato famine and unfair land reform in Scotland. It recounts their harrowing sea voyage to Texas, and leads into how and why the families settled in Todos Santos Lake, located in the South Texas county of Frio.