A Tradition that Transcends Time 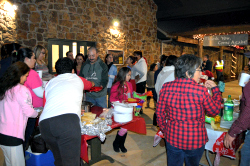 You’ve probably heard of the 12 Days of Christmas, but what about the 9 nights of Las Posadas? Translated as “the inns,” Las Posadas is a Hispanic Catholic Christmas tradition that emerged in Mexico over 400 years ago to celebrate the hospitality shown to Joseph and Mary by an innkeeper in Bethlehem. Each year from December 16–24, different families in a neighborhood will take turns hosting the community at their homes to commemorate the Biblical story of Mary and Joseph’s difficult search for lodging in Bethlehem as they awaited the birth of Jesus. For the first time in 250 years, the celebration returned to its original home in San Augustine—Mission Dolores.

As an isolated waypoint along El Camino Real de los Tejas, the residents of Mission Dolores interacted with many local Indians and French traders passing through the area, exposing each group to new beliefs, technologies, and resources. Las Posadas emerged from similar circumstances in Mexico, with the fusion of Catholic religious beliefs and indigenous public performances and processions eventually spreading to Spanish Texas. During Las Posadas, a host family acts as innkeepers, while the remainder of the community are peregrinos, or pilgrims, who carry a nativity scene in a procession to the “inn.” At the doorway to the host’s home, los peregrinos sing a traditional call-and-response hymn asking for shelter. While the pilgrims are initially denied entry, the “innkeepers” eventually relent, singing that although their home is poor, the invitation comes from the heart. 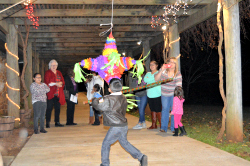 On December 21, 2016, Mission Dolores State Historic Site hosted a public posada at the museum with members of St. Augustine Catholic Church. The procession and hymns used in the celebration were sung in the traditional Spanish and followed by a meal of tamales and atole (a hot drink made with masa). Festivities concluded with a seven-pointed piñata, where each corner represents the “Seven Deadly Sins” that need to be destroyed by the children hitting it. When the piñata is finally broken open, it bestows blessings (candy) on the participants.

San Augustine’s Catholic past was connected with its present this past holiday season when the Las Posadas tradition returned to Mission Dolores.