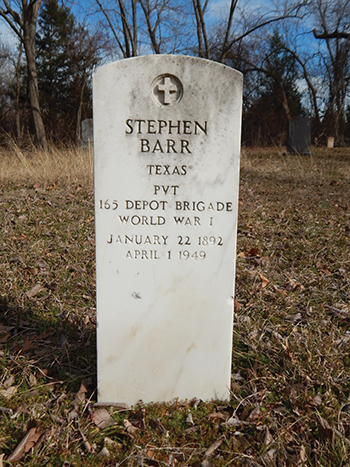 Signs of the First World War are all around us—hiding in plain sight, in fact. One obvious but overlooked place is local cemeteries. For those with an interest in World War I, grave markers are an invaluable source of information about the men and women who served.

After World War I, the repatriation of American dead from Europe resulted in a redesign of military headstones. The result was the so-called “General Type,” consisting of an upright headstone in marble or granite. In later years, the U.S. government would also offer two other options: a flat marble or granite marker, and a flat bronze marker.

The amount of information displayed about the veteran depends on when the marker or headstone was issued. In addition to the name of the veteran and the death date, it might also include: a date or year of birth; the wars or conflicts the veteran served in; military rank; branch of service; details about the veteran’s division, brigade, regiment, and company; and his or her home state. In addition, the veteran’s family members were given the opportunity to request the inclusion of a religious symbol.

Not all the veterans in local cemeteries will have a military headstone. Some who died during or soon after the war were given civilian headstones, often with patriotic flourishes. Others received markers which made no mention of their wartime service, either because their family did not know the U.S. government would provide one, or because they chose not to have one. Many veterans have no headstone at all or have one which is no longer visible. 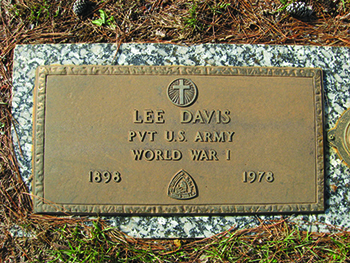 Today the U.S. Department of Veterans Affairs provides new or replacement military headstones for the graves of qualifying veterans.

Several resources are available for sleuths who want to know more about the World War I veterans in their midst.

All headstone application records between 1925 and 1963 are maintained by the National Archives and Records Administration and are accessible online.

Texas is one of only a few states which still possesses its World War I military service cards and Victory Medal applications. The originals are held at the Texas Military Forces Museum in Austin but are freely available online. And don’t forget about local or regional libraries—archived newspapers contain information about the home front, war mobilization, names of service personnel, and how communities bore the brunt of World War I.