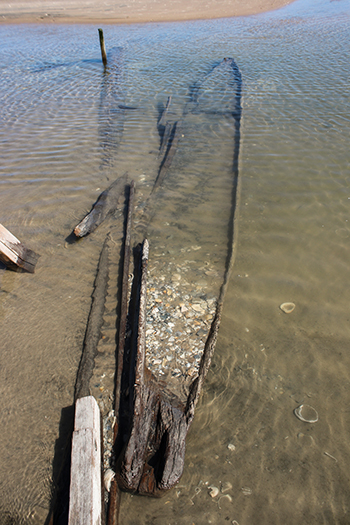 In late 2018, a fisherman was casting a line off the South Texas coast when he noticed a distinctive shape emerging from the water at low tide. He immediately notified the Texas Historical Commission’s (THC) Archeology Division, which dispatched staff the next day to identify and document the discovery.

The object was a 20-foot-long dugout canoe made of pine. Radiocarbon dating indicated it could be more than a century old, likely built between 1805 and 1935. It is believed to be of Caucasian manufacture. Marine archeologists do not think it is a tribal canoe.

The physical location of the canoe had been known to the agency for years simply as a long spattering of pilings projecting out of the beach. It was only through the dramatic storm-caused removal of overlying beach sand that it was revealed this larger archeological site contained a buried canoe.

Over the past several years, the Archeology Division has amassed a small inventory of Texas canoes, largely based on examples displayed or curated at regional museums. The recently discovered South Texas canoe is the only one so far that has been observed in situ (within its original setting).

The archeological site itself is an enigma, as it seems to have attributes of a coastal settlement with a canoe resting within it. The THC hopes to continue documenting the site and working with neighboring land owners to examine archeological features that could be associated with the larger beach site. The THC recently designated the dugout site as a State Archeological Landmark, the most protective state designation awarded to an archeological site. The sensitivity of the dugout site is so great that even the identity of the specific region and participating volunteers and agencies are omitted in retelling this exciting discovery. 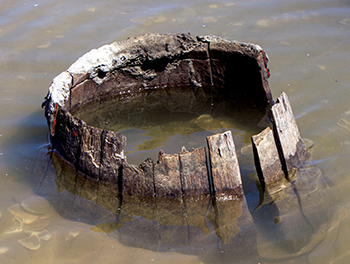 Archeology Division Director Pat Mercado-Allinger notes that ongoing fieldwork in maritime archeology has been focused on the South Texas coast, primarily via examining sites that have been eroding out of the beach in recent years. This includes the (presumed) 19th-century sailing ship known as Boca Chica No. 1.

The Boca Chica shipwreck was first examined by the THC in 1980, then again in 1988 when the agency was notified about its exposure on the beach. Volunteers with the THC’s Texas Archeological Stewardship Network monitor the coastline for these vulnerable sites. After a storm in December 2017, the THC learned Boca Chica No. 1 was again visible.

In November 2018, portions of the vessel once again projected out of the sand. It is anticipated that periodic uncovering of coastal archeological sites will occur with more frequency due to the heavy rate of coastal erosion in South Texas.

Mercado-Allinger asks the public to help the THC by reporting these unique sites and helping preserve Texas’ shared history.

Learn more about the THC’s Texas Archeological Stewards Program, and the Marine Archeology program and the Boca Chica shipwrecks in a recent blog post. For more information, call 512-463-6096. 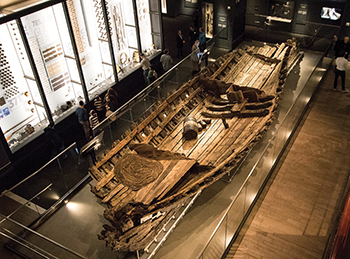 The THC’s excavation of La Belle (1686) in Matagorda Bay concluded in 1997, and conservation of the nearly two million artifacts was recently completed. The grand opening of the Austin-based Bullock Texas State History Museum’s redesigned first floor, known as the Becoming Texas exhibit space, occurred late last year. It features a sizable collection of representative La Belle artifacts and the preserved hull of the ship.

In addition, a technical publication detailing the investigation and artifact analysis, La Belle: The Archaeology of a Seventeenth-Century Vessel of New World Colonization, was published in 2017. Since this publication, continuing analytical studies promise to generate new insights about La Salle’s tragic story.

The THC’s investigation of the 1554 Spanish Plate Fleet (San Esteban and Espíritu Santo) off Padre Island concluded in 1975, resulting in the recovery of more than 9,000 artifacts. As the 50th anniversary of the THC investigation approaches, the Archeology Division is re-inventorying the collection and seeking avenues for new analytical studies and potential publications. AD staff members have been invited to present papers on this project and are developing research at the Annual Conference for Historical and Underwater Archaeology hosted by the Society of Historical Archeology in Boston in January 2020.