Crockett, Bowie, Travis—they’re all iconic standalone names that define heroism during the Texas Revolution. But what about Mann, Castrillón, and Almonte? All three participated in the story of Texas’ independence but didn’t make headlines or many Texas history textbooks. Each of them offered a slice of humanity that resonates to this day.

MRS. MANN AND HER OXEN
By all accounts, Pamelia Dickinson Mann was feistier than the average frontierswoman. Life was difficult for Texas settlers, and many women like Mann had to take charge of their households while their husbands were absent—especially during the Runaway Scrape.

For obvious reasons, the story of the Texas Revolution focuses heavily on men, and the few women who do appear in the narrative are usually victims. However, Mann’s story is a good example of the indomitable spirit of Texas frontierswomen.

Mann immigrated to Texas with her husband and two sons in 1834, settling near San Felipe de Austin. During the revolution, Mann operated an inn at Washington-on-the-Brazos but fled along with everyone else when the government evacuated. This mass evacuation of civilians, known as the Runaway Scrape, often traveled alongside Gen. Sam Houston’s army as it retreated east.

On April 12, 1836, the Texian army crossed the Brazos River after spending two weeks training at Groce’s Plantation. While they crossed the river, the Twin Sisters, the two six-pound cannons that were the Texas army’s only artillery, were delivered.

Cannons are very heavy and difficult to move, an issue made worse by the heavy spring rains that turned the roads to mud. Mann agreed to let the Texas army use her team of oxen to pull the Twin Sisters while they headed toward Nacogdoches with the Runaway Scrape.

On April 16, near present-day New Kentucky, the group approached a fork in the road. The civilians, including Mann, took the east branch toward Nacogdoches, while the Texian army took the south branch, which led to Harrisburg and the Mexican army.

Eyewitness Robert Hancock Hunter later recorded a vivid account of what happened next. About 10 miles down the road, Mann, armed with two pistols and a knife (and in some accounts, a whip), overtook Houston and shouted, “General, you told me a damn lie. You said that you were going on the Nacogdoches Road. Sir, I want my oxen!”

Houston replied, “Well, Ms. Mann, we can’t spare them. We can’t get our cannon along without them.”

“I don’t care a damn for your cannon,” Mann responded. “I want my oxen!”

She then pulled a large knife from her saddle, cut the rawhide tug connecting her oxen to the cannons, and rode away with the oxen. Capt. Conrad Rohrer, the wagon master, protested that they could not move the cannons without the oxen and rode after Mann to try and reclaim them. As he left, Houston shouted, “Captain, that woman will bite.” Rohrer responded, “Damn her biting.”

Without Mann’s oxen, the Texian army had no choice but to push the Twin Sisters by hand. Gen. Houston was the first to dismount his horse, and, along with nearly 10 men, began pushing the cannons through the mud.

Rohrer reappeared after the army made camp that night, empty-handed with a torn shirt. He announced that Mrs. Mann decided to keep her oxen. 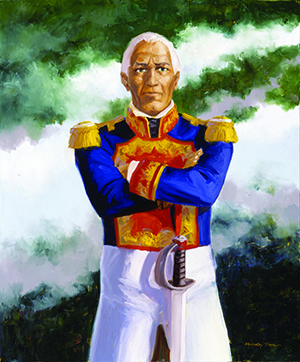 There are enough accounts of Mexican army Maj. Gen. Manuel Fernández Castrillón to know that he stared down the advancing Texian army and refused to flee. Although he’s not a familiar name in the stories of the Texas Revolution, he deserves recognition for his courage and bravery. And a very dramatic death.

Castrillón was also known for opposing Gen. Santa Anna’s treatment of Texian prisoners, pleading for the lives of Texian soldiers at the Alamo, and protesting Santa Anna’s orders to execute the prisoners at Goliad. But on the fateful day of April 21, 1836, Castrillón was the Mexican artillery commander in charge of the Golden Standard cannon (El Volcan). As the Mexican defense started to crumble, and soldiers started to flee—including some of Castrillón’s cannoneers—he stood his ground.

According to an account from Texian Second Lt. Walter Paye Lane, “As we charged into them, the General commanding the Tampico Battalion (their best troops) tried to rally his men, but could not. He drew himself up, faced us, and said in Spanish ‘I have been in forty battles and never showed my back; I am too old to do it now.’

Lane continued, “Gen. Rusk [Texian Secretary of War and a Battle of San Jacinto commander] hallooed to his men: ‘Don’t shoot him,’ and knocked up some to their guns; but others ran around and riddled him with balls. I was sorry for him. He was an old Castilian gentleman, Gen. Castrillón.” Lorenzo de Zavala, Texas’ interim vice president, was an old friend of Castrillón. After the battle, De Zavala’s son had Castrillon’s body buried in his family cemetery on the other side of Buffalo Bayou. Castrillón was the only Mexican officer to receive a proper burial after the battle. 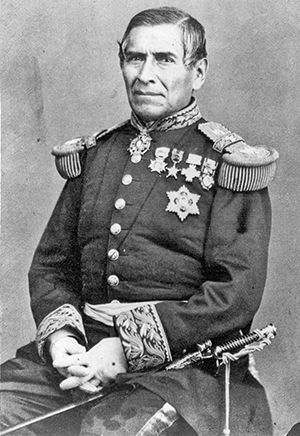 The story of the Texas Revolution can often turn into a very black-and-white story of the virtuous Texans fighting against the evil Mexicans, in part because Santa Anna often embodies many of those characteristics. Mexican Col. Juan Nepomuceno Almonte provides a refreshing example of a Mexican soldier prioritizing civilian life over military victory.

Almonte, who attended school in the U.S and spoke fluent English, was quite familiar with Texas. In 1834, the Mexican government, worried about the rebellious Anglo immigrants, sent Almonte on an inspection tour. His detailed report is one of the most comprehensive accounts of Mexican Texas.

On April 15, 1836, Almonte was in command of the vanguard that Santa Anna sent to capture David Burnet, interim president of Texas, and Lorenzo de Zavala, interim vice president. The Texas government was fleeing to Galveston, where they would be safe from the Mexican army.

Almonte and his troops caught up with Burnet in New Washington (modern-day La Porte) on April 16. Burnet, his family, and several cabinet members were waiting for a schooner to Galveston to be loaded when a Texas courier raced up, shouting, “Make haste, Mr. President! The Mexicans are coming!”

Burnet and his men quickly boarded a skiff and pushed off, just moments before Almonte’s men arrived. According to schooner captain Dr. George Moffitt Patrick, as the boat pushed off from shore, “the Mexicans were descending the hill, and not more than one hundred and fifty paces from us. We had not made more than thirty or forty yards from the shore when the enemy dismounted on the beach.”

Burnet stood up, making himself a target to save his wife and child. However, when Almonte saw that Hannah Burnet and her children were also in the boat, he ordered his men to hold their fire, unwilling to risk killing civilians. Burnet and the rest of the cabinet were able to regroup in Galveston for the remainder of the war.

After the battle, Texian soldiers hunted down and killed every Mexican soldier they could find. Realizing that their only hope for survival was to surrender en masse, Almonte gathered a group of 200 men near Peggy’s Lake and ordered them to drop their weapons and surrender to a dozen Texian soldiers. Badly outnumbered, the Texians took them prisoner instead of fighting.

Unlike most of the Mexican soldiers captured at San Jacinto, Almonte was spared and returned to Mexico along with Santa Anna in early 1837.