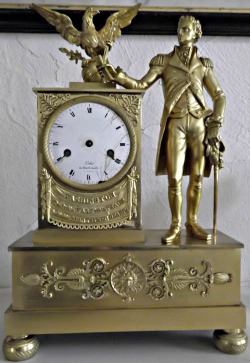 Manufactured in Paris, France, by Jean Batiste Dubuc, this mantle clock was produced between 1806 and 1817 as part of a wave of memorabilia memorializing George Washington after his death in 1799. Covered in a type of gilt bronze known as “ormolu,” the clock rests on a rectangular base with bun feet, and is decorated with a centrally placed mask of Apollo. Apollo’s image is flanked on both sides by leaf-capped scrolls that taper into pomegranates, which were often used as symbols of resurrection.

The left side of the main clock case depicts a winged figure holding a laurel wreath in each hand, and palm leaves adorn the corners above the clock’s face. An eagle perched on a globe rests atop the rectangular clock case, while a banner beneath the globe reads “E Pluribus Unum,” the motto from the Great Seal of the United States. Under the clock dial, another banner states “Washington The First in War, First in Peace and in his Countrymen [sic] Hearts”—an abbreviated excerpt from Major-General Henry Lee’s Funeral Oration on the Death of General Washington.

Leaning against the clock is a gilt figure of George Washington in his military uniform holding a scroll in his right hand, as his left hand rests on his sword. This pose was based on an engraving of John Trumbull’s painting General George Washington at the Battle of Trenton, which depicts Washington holding a spyglass instead of a scroll. The scroll held by the clock’s Washington figure represents the increasingly popular image of him at the time as a philosopher and statesman, and not just a military leader. Although Dubuc produced many Washington clocks that varied in size, decorative motifs, and embellishments, his continuous use of a standing representation of the General emphasized Washington’s popularity not just in America, but across France as well.