During a violent storm in April 1554, four Spanish Plate Fleet vessels became separated en route from San Juan de Ulúa (Veracruz), Mexico on their way to Spain. Only San Andres would safely arrive at Havana, Cuba, though heavily damaged—the remainder of the fleet ran aground and sank off present-day Padre Island, Texas. Most of the passengers and crew of San Esteban, Espíritu Santo, and Santa María de Yciar, nearly 300 individuals, perished in the tragedy.

Two of the three shipwrecks were discovered during the 1960s, and the third vessel is still undiscovered and was presumed destroyed by the dredging and creation of Mansfield Cut. These shipwrecks are the oldest excavated shipwrecks in the U.S., and the salvage of one of these vessels in 1967, and the resultant lawsuit, led to the enactment of the Antiquities Code of Texas (ACT) and the creation of the Texas Antiquities Committee (TAC), a predecessor to the Texas Historical Commission (THC), in 1969. The TAC excavated San Esteban and recovered additional artifacts from Espíritu Santo from 1972–75. This effort is often credited as one of the (if not the) first scientific underwater excavations of a shipwreck in the U.S.

For too long the story of the woman who discovered the wrecks, Vida Lee Connor, has been overlooked. So much importance has been placed on these remarkable shipwrecks, including their lasting impact on stateside underwater archeology and resource management, that this unique element of the story has been largely forgotten.

A Texan Among Texans 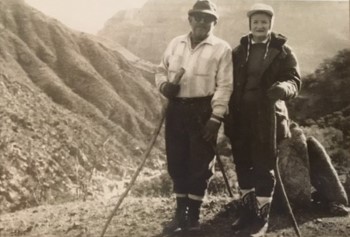 Who was Vida Lee Connor? First and foremost a Texas woman, a dynamic yachtsman, and a trophy fisherman, with a penchant for George Dickel whiskey. Vida (or “life” in Spanish) was an exceptionally well-suited name for an individual so full of, and larger than, life. She bred thoroughbred Tennessee Walker horses and played with the skill of a concert pianist. Her heralded exploratory endeavors in the 1960s included discovery of the 19th-century steamboat Mary Summers in the Navidad River and an aircraft wreck off Yarborough Pass in the Gulf of Mexico.* 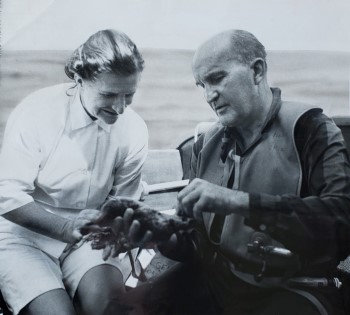 Around 1962, she discovered an expansive series of new reefs near Port Mansfield, which may comprise portions of what are now referred to as Sebree, Steamer, and Seven and One-Half Fathom Reefs. Connor enlisted oceanographers Dr. Harold Geis and Dr. Wendell Pierce for consultation and fieldwork. Both Gies and Pierce participated in Connor’s 1554 shipwreck expeditions and Pierce would later acquire an antiquities permit from the THC to investigate the Civil War blockade runner Acadia off San Luis Pass. Connor’s fervor and enthusiasm for coastal archeology and marine science was inspiring and culminated in many volunteer scientific ventures. Her adventures allude to a real-life icon in the making and a true Texan among Texans.

Connor was born in Sweetwater on August 31, 1913, the daughter of William B. Hartgraves, a farmer, and his wife, Mary Ella Pelton. With her twin sister Ada, she was one of a dozen children. It was during her marriage to Dr. Edwin Connor, owner of the former Parkview General Hospital in Corpus Christi, that her extracurricular pursuits really made their mark. Connor’s maritime interests flourished through her access to the hospital’s 42-foot yacht that bore her name, Vida Lee III, and also a private plane. Newspaper articles and interviews with her family detail frequent participation in local maritime parades and water safaris. The pageant streamers that adorned the vessel are still displayed by the family at special occasions. In 1961, Vida Lee III was designated as an auxiliary coast guard vessel. Connor would later use the yacht to conduct dives with marine biology students and the dive club from the University of Corpus Christi (now Texas A&M University-Corpus Christi). 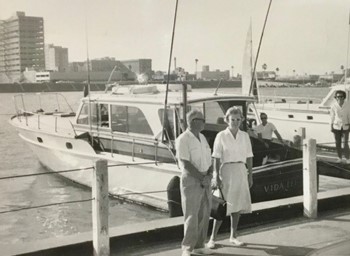 Connor’s discovery of the 1554 shipwrecks occurred in 1964 while on an aerial survey to look for coral reefs. The marine visibility was excellent, much better than normal, and Connor observed 16 shapes in the water, all of which she believed represented unique individual shipwrecks. The plane landed, then immediately returned to the air supplied with ropes and small buoys—with the objects now marked, Connor planned a dive investigation to identify the mysterious submerged shapes.

She returned to the site and recognized many polished stones, the ship’s ballast, which appeared foreign to the area. Other items associated with the ship’s anchor were later observed in 1966. Unknown to Connor, the 16 features represented collections of concreted artifacts, many of which were quite sizeable, spread across the seafloor—not all represented individual shipwrecks. Already outfitted with an air compressor (for scuba tank fills), Vida Lee III was converted to a research vessel to continue her work by adding a fathometer (which records water depths) and a magnetometer that would omit an audible buzz when a magnetic target was detected. The seven targets with the largest magnetic signatures were buoyed for later evaluation.

Based on student research she co-sponsored in Spanish archives in spring 1965, Connor correctly believed the Padre Island discovery comprised the 1553 Spanish expedition. This fleet later departed Veracruz in 1554 with a cargo of silver and gold resources mined from territories in New Spain. With an altruistic mindset, Connor did not conceal the wreck discovery and identity or recover artifacts for her own material gain, but instead heavily published her accounts in newspapers in 1966, seeking help from other divers to validate her find. These articles were forthcoming about the location, and she advertised she had marked the wreck positions with buoys.

Connor suspected that her candidness about the site locations and history may have led to the later salvage. Unexpected events hindered her ability to fully examine the shipwrecks, including the sinking of Vida Lee III during an August 1965 site investigation and serious injuries sustained after an automobile accident in November 1966, just months after her July 1966 field expedition. When she finally returned to conduct more work, another vessel was dragline excavating and removing artifacts from the shipwreck later identified as Espíritu Santo.** She presumed this was Platoro Ltd., Inc., the Indiana salvage company that would become embroiled in a 17-year lawsuit with the state over the jurisdictional right to work in state waters.

Ultimately, Texas was awarded the artifact collection, which is managed by the THC—and in 1967, Connor was invited to view the assemblage while it was temporarily stored at the Texas State Library and Archives Commission. The THC sponsored a magnetometer survey in 1970 to relocate the archeological sites, and then began excavations of San Esteban in July 1972. The more than 9,500-artifact assemblage includes ballast stones, artillery, astrolabes, silver, and a 16-foot section of San Esteban’s keel, which are curated and on display at the Corpus Christi Museum of Science and History. 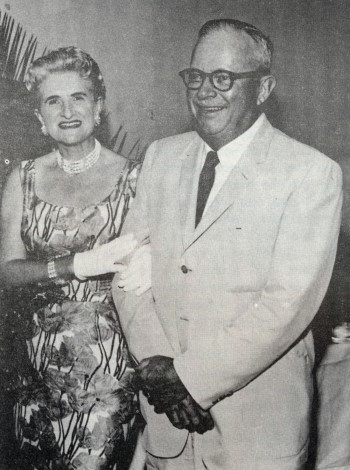 Connor’s interest in this field, though originally accidental, was timely. Underwater archeology, which in earlier years was considered a novelty hobby for history buffs and collectors, was formally emerging as a science and discipline, due in large part to George Bass’ groundbreaking work in 1960 at Cape Gelidonya, Turkey, as a doctoral student at the University of Pennsylvania. Bass later founded the Institute of Nautical Archeology and the Nautical Archeology Program at Texas A&M University in 1972 and 1976, respectively. These early decades were transitional years for the field, as a larger appreciation of what could be learned from these submerged sites was more widely recognized and state and federal agencies formalized protection of underwater sites. Connor’s words, published in 1969, captured the burgeoning historic and academic emphasis of the more scientific approach: “My own belief, after viewing the many items recovered, is that the real value of this find cannot be judged in dollars. Objects representing a way of life four hundred years ago are the real treasures.”

Sadly, after the unexpected death of her husband in 1972 and related financial challenges, Connor was unable to engage in the types of pursuits she previously relished. Later in life, with so much of her early work overlooked, she remarked that she felt she had not been taken seriously—an unfortunate sentiment that could not easily be rectified before her death at the age of 85 in 1998. Unbeknownst to Connor, her work still greatly inspires today. In an unknowingly prescient insight in 1966, she described her discovery as the greatest field of shipwrecks ever discovered. More than 50 years later, these still hold almost unparalleled significance in Texas and abroad.

* The metal-hulled shipwreck was misidentified by her team as a Jean Lafitte pirate ship, but was in fact Mary Summers.
**Connor (1969a:27) recollects she observed the salvage in fall 1965 but the timeline presented in newspaper accounts indicates this was actually in 1966, sometime after her July 1966 expedition—the site was not being salvaged by other individuals before then.

Note: Connor was not recognized as the discoverer of the 1554 shipwrecks in the original archeological studies produced by the Texas Antiquities Committee, as the Marine Archeology Program at that time was unaware of her story. This interesting fact was discovered in the publication, Padre Island: An Administrative History, while I [Amy Borgens] was converting a 2020 conference presentation on the 1554 Shipwrecks into a forthcoming book chapter. The National Park Service study cited Connor’s 1969(a) publication and in October 2021, I viewed a copy at the Dolph Briscoe Center for American History at the University of Texas at Austin. In 2021, I located and contacted Connor’s grandchildren to gain assistance with telling her story, only to learn her daughter Dolores Brown had passed away three months prior. Her eldest daughter, Janice Martin, died in 2019.

Acknowledgements: I extend my heartfelt gratitude to Connor’s grandchildren—Connor and Danielle Brown and Cindy Brown Spencer—for providing articles, images, and conversation for this story. Special thanks are also extended to Allison Erhlich, archivist and member of the editorial board of the Corpus Christi Caller Times, for providing records from their collection. David Hicks of University of Texas-Rio Grande Valley and George Schmahl of NOAA’s Flower Garden Banks National Marine Sanctuary provided insight and advice on the reef discovery by Connor.