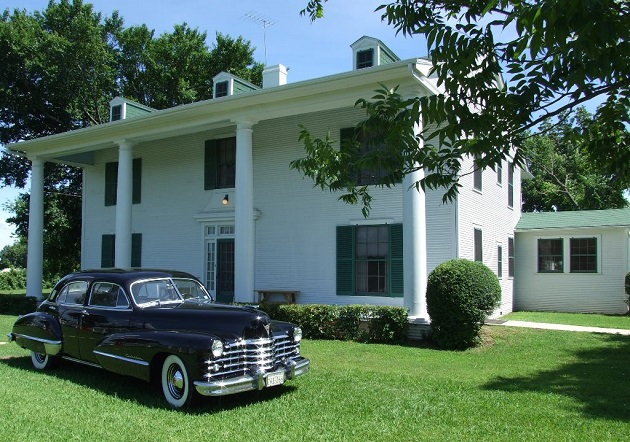 October is Texas Archeology Month, the time we celebrate the science and history of past cultures. But what is archeology? A traditional definition of archeology is the scientific study of material remains of past human life and activities. When we think of archeology, we often picture ancient civilizations that left little to no written record of their history. But there is an entire field of archeology that explores the modern era.

The State of Texas was given Congressman Sam Rayburn’s home and a portion of his farm in the 1970s. Since then, there have been three archeological investigations at the Sam Rayburn House State Historic Site. The first survey was conducted in 1977–78 and, along with historic photographs and oral histories, helped determine the location of many of the homesite’s original building locations.

Knowing the existence and location of structures that no longer stand helps us tell the story of Mr. Sam’s farm. The hog pens, horse corral, brooder house, and chicken coop tell us this was a working farm. The existence of the outhouse indicates that, although the house was built with all the modern conveniences, including indoor plumbing, there was some difficulty in getting water to the house from the well.

The first archeological investigation yielded over 10,000 artifacts, most of which relate to daily life on a farm. Numerous nails, wire fragments, pieces of roofing shingles, and shards of window glass tell us about construction of the various buildings and animal enclosures, while objects such as a lawn sprinkler and a plowshare indicate how the land was cared for. An area with a high concentration of assorted artifacts from coffee-can fragments and lids to a charge tag show us not only where the Rayburn family discarded their trash but which brand of coffee they preferred (Maxwell House) and what stores they shopped at (A. Harris, Co. in Dallas).

Another purpose of an archeological investigation is to ensure that a construction project won’t impact the archeological record of a site. This was the case for the second and third archeological surveys at the Sam Rayburn House. New interpretive signage on the site prompted a small investigation in 2010–11, while utility work required additional study in 2014–16.

This type of investigation is considered a monitoring project, where the archeologist ensures that work done during construction or excavation does not damage the historic integrity of the site. Although a scattering of artifacts was found during both investigations, neither of these projects was determined to have a major impact on the site’s archeological deposits.

Future projects may also require archeological impact surveys or investigations. As technology progresses, so does the scientific field of archeology. It is interesting to think what future generations will be able to learn from archeological study of our era!