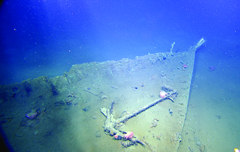 Each October, Texas Archeology Month (TAM) celebrates the spirit of discovery. Texas Historical Commission (THC) archeologists work with communities across the state to heighten awareness of cultural heritage and discuss compelling elements of the past.

In the process, archeologists have found that shipwrecks are among the most captivating aspects of discovery. In Texas, the wreck of La Belle, the ship of 17th-century French explorer Robert Cavelier, Sieur de La Salle, has fascinated people across the world since THC archeologists discovered it nearly 20 years ago in Matagorda Bay. In addition, the THC and the Texas Antiquities Committee excavated three 1554 Spanish shipwrecks off Padre Island in the early 1970s.

However, many of those intrigued by shipwrecks are unfamiliar with another significant maritime discovery, also assisted by the THC’s Marine Archeology Program.

In April 2012, scientists made an extraordinary find in the Gulf of Mexico. During a remotely operated vehicle (ROV) investigation of offshore deepwater marine and cultural resources, a crew from the National Oceanic and Atmospheric Administration’s (NOAA) Okeanos Explorer examined an unidentified sonar target at a depth of 4,300 feet (initially discovered during a Shell Oil Company survey in 2011). The investigation verified not only that the target was a shipwreck approximately 85 feet in length, but also that it was armed with cannons and carried a collection of firearms.

The wreck, referred to as Monterrey Shipwreck A, was well preserved, and its ghostlike remains contained 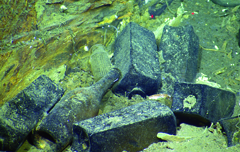 materials that would have been used by its crew and potentially carried as cargo. The remote location of this wreck, more than 200 miles from the nearest shore at Galveston—far away from a timely rescue—suggests the fate of the crew was dire.

“The ship slipped, lost and forgotten, from the pages of history as it settled to the seafloor nearly a mile below,” says Jack Irion, a marine archeology supervisor with the Bureau of Ocean Energy Management.

Excitement about this discovery, which was live-streamed online as part of the Okeanos Explorer’s broadcast capabilities, was the genesis of a second expedition. A collaborative team returned to the site in July 2013 to collect a small sample of artifacts to aid in identifying the vessel and its purpose. The team included archeologists from the THC, Texas State University’s Meadows Center for Water and the Environment (MCWE), NOAA’s Office of Ocean Exploration and Research and the Office of National Marine Sanctuaries, the Bureau of Ocean Energy Management, and the Bureau of Safety and Environmental Enforcement.

This work was privately funded and conducted under a federal antiquities permit aboard the Ocean Exploration Trust (OET) research vessel Nautilus. Like the Okeanos Explorer expedition that preceded it, audiences around the world watched events unfold live online as archeologists worked with the ROV pilots to collect these fragile objects. Nautilus’ telepresence capabilities enabled Internet users to observe fieldwork activities and communicate with the team by sending comments and inquiries that were sometimes addressed on the air.

“The ability to interact with and observe underwater excavations as a non-participant is unique, especially at these extreme water depths,” says Pat Mercado-Allinger, director of the THC’s Archeology Division.

The investigation recovered more than 60 artifacts, collected detailed videos and photos, produced an intricate photomosaic site map and centimeter-accurate three-dimensional contour map, and introduced experiments near the site to study biological processes impacting the wreck. As the fieldwork neared conclusion, the team investigated two nearby sonar targets. To the surprise and delight of those participating on the project and watching online, they also proved to be shipwrecks.

“Observers around the world were able to share in these amazing discoveries, as recognition of these unidentified targets as shipwrecks was live-broadcast,” Mercado-Allinger explains.

Monterrey Shipwreck B, the smallest of the three vessels at approximately 65 feet long, was carrying animal hides among its cargo when it sank. The purpose of the third vessel, Monterrey Shipwreck C, is unclear, as it is unarmed and whatever cargo it may once have carried no longer survives. This wreck is the largest and most visibly damaged of the three. The nearly 100-foot long vessel is believed to have been a three-masted ship. All three wrecks are within three to five miles of one another and contain similar artifacts, leading to the belief that these were lost in a single tragic event, such as a catastrophic storm, likely resulting in the loss of all life on board.

The recovered artifacts offer a glimpse into the lives of these doomed mariners and are comprised of dinnerware, ceramic storage containers, navigational tools such as telescopes and a sand clock, intact medicinal bottles (including two believed to contain ginger), and assorted firearms. Among the personal objects are a shoe sole, spoon, and a double-sided toothbrush.

The material generally dates from the last quarter of the 18th century to the first quarter of the 19th century, a volatile time in Gulf of Mexico history. This period was punctuated by the War of 1812’s events at the Battle of New Orleans, the collapse of the Spanish empire during the Napoleonic Wars, and the emergence of newly independent nations as Mexico and Latin American countries sought independence from the Spanish monarchy.

Pirates and privateers frequently worked in concert with these groups, sometimes seeking personal gain but often also aiding these causes as de facto navies. It was during these years, and into the 1820s, that privateering activities in the gulf were at their peak.

Current research suggests the wrecks may represent a privateer and two prizes, or perhaps a convoy, that were in transit when tragically lost. If this can conclusively be confirmed by additional research and sampling at the sites, these three wrecks may be among the few examples of such a collective archeological site of this type in the world.

Bringing the Belle to the Bullock

The exhibit will allow museum visitors to view the transformation of a nearly 600-piece, three-dimensional “jigsaw puzzle” of historic timbers into a recognizable ship. Other exhibit highlights include newly edited film footage, rare artifacts, touch pad games, and interviews with conservators.

In July, the Belle’s 17th-century timbers—including the 800-pound keel, 1,100-pound keelson, and mast—were carefully delivered to the Bullock Museum in preparation for the exhibit. THC archeologists discovered the 1686 shipwreck in Matagorda Bay nearly 20 years ago, beginning an extraordinary recovery and conservation process culminating with the exhibit, which will become a prominent, permanent centerpiece of the museum.

“This is one of the most important shipwrecks ever discovered in North America, so we’re very excited to finally have it available for the public to learn more about how this event shaped Texas history,” Mercado-Allinger says. “It’s a wonderful representation of our mission at the THC, especially during Texas Archeology Month, when we encourage Texans to discover the wonders of our state’s fascinating heritage.”

This article was originally published in the Fall 2014 issue of The Medallion.