Warming Up to the Cold War 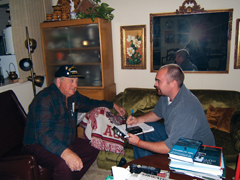 For some Texans, the Cold War may seem vague due to its lack of cohesive geographical boundaries. Regardless, its soldiers—Texas men and women, in particular—served with discernible distinction and resolute mettle on the home front.

The state of Texas is home to dozens of military installations and civilian facilities that had a direct connection to the Cold War, an unofficial, but all-too-real “state of war” between the United States and the Soviet Union stemming from competing views of international developments from 1946–1991. In addition, the state has thousands of Cold Warriors’ stories, from all branches of military service to civilian endeavors, which remain unrecorded and preserved. Their rich and abundant narratives of the Berlin Blockade, the Korean War, the Cuban Missile Crisis, the Vietnam War, and Texas military sites, if collected and preserved, can lead to a better understanding of the Cold War’s impact on Texas history.

“The workshop attendees provided some really valuable feedback about their interest in oral history techniques and how their communities were directly impacted,” said Bratten Thomason, director of the THC’s History Programs Division. “As you can imagine, for a conflict that ended just a few decades ago, many attendees had personal connections and came away with a better understanding of Texas’ historic context to this seminal event in our state and nation’s history.”

Thanks to the information gleaned from the Hays County workshop, the THC, with support from Texas preservationists and funding from Dallas’ The Summerlee Foundation, launched an oral history training workshop series in August 2013 titled “When the Lone Star State Met the Iron Curtain: Recollections of Texas in the Cold War.”

The THC provides the public with resources for those interested in preserving the legacy of a Cold Warrior candidate (home front or veteran) with an oral history interview. The Texas in the Cold War web page offers links to THC oral history guidelines and information on oral history and Cold War programs across the state. The website also includes information about the THC’s upcoming free regional training workshops (additional details below). 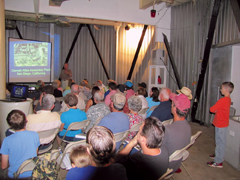 The THC’s first oral history training workshop was held last summer in southern Taylor County near Lawn at a privately owned decommissioned 1960s-era U.S. Air Force Atlas F Missile Silo complex. To secure this one-of-a kind location, the agency’s Military Sites Program collaborated with the Taylor CHC, the Texas Forts Trail Region, and site owner Larry Sanders. The workshop was a success, with nearly 60 attendees in an authentic Cold War environment learning about the context of the era. The series’ second oral history training workshop was held in Grayson County in January 2014 at the Perrin Air Force Base Historical Museum. This venue also offered an appropriate context to explore an undertold part of Texas’ Cold War history, as the museum chronicles the base’s World War II to Cold War service, and its closure during the Vietnam War to help pay for the mounting war debt. Another Texas in the Cold War-related event was held in March 2014, when THC staff joined the City of Austin Parks Department for a tour of two Cold War-era fallout shelters. 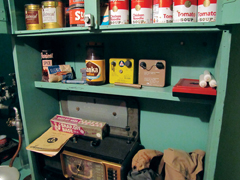 Attendees also learn how to preserve their recordings at national repositories such as the Library of Congress or through Texas’ Cold War-themed programs, including Texas Tech University’s Vietnam Center and Archive, and the University of Texas’ Latino and Latina-themed Voces Oral History Project.

“Unfortunately, the number of workshops is limited due to funds raised to date,” Thomason explained. “The good news is, the training they provide is slowly but surely creating a geographically dispersed pool of trained oral historians. They’re coming away excited about recording and preserving local Cold War histories for their communities.”

The Military Sites Program worked with the U.S. Army to secure the Fort Bliss Historical Museum for a workshop in El Paso on August 16, 2014. On September 13, the National Vietnam War Museum in Mineral Wells, the Palo Pinto County Historical Commission, and the Texas Forts Trail have offered their assistance in serving as co-hosts for a workshop at Fort Wolters. Finally, the Nueces CHC has secured the Del Mar College in Corpus Christi; this site will provide an opportunity to discuss Texas’ extensive Cold War presence at naval air stations in Corpus Christi, Kingsville, Chase Field, and Naval Station Ingleside. Visit the THC’s Texas in the Cold War web page for updates.

She notes that the program’s first interview was conducted in December 2013 with veteran Pete Berkowitz (now chairman of the Texas Holocaust and Genocide Commission), who served at Fort Bliss from 1957–59 in the U.S. Army’s Office of Special Weapons Development. He also served as a NASA engineer on the Mercury, Gemini, and Apollo space programs during the 1960s.

To view excerpts from these and future oral history interviews, or to learn more about upcoming workshops, visit the THC’s Texas in the Cold War web page. To make a donation to this significant program, please visit the Friends of the Texas Historical Commission website or call 512.936.2189.

This article was originally published in the Summer 2014 issue of The Medallion.