THC staff review the gamut of historic property types, from picturesque courthouses to modest farmsteads. Part of Texas’ heritage is our infrastructure—the systems that provide our road networks, power grids, industry, and support for our daily lives. These systems have a large effect on the design of neighborhoods, the success of businesses, and the shape of our communities. Although less understood, sometimes less accessible, and often less charming than the historic buildings we typically celebrate, the THC wants to highlight stories from around the state and hear about the historic infrastructure in your community.

This edition of our new Infrastructure Intermission feature focuses on water towers and windmills. 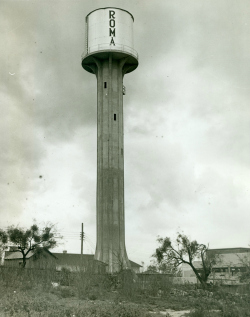 It can be easy to forget about the journey that clean, potable water takes to get to your faucet. From subterranean aquifers, pipes coursing through walls under plaster and drywall, and the treatment plant tucked away on the edge of town, much of our water supply is out of sight and often out of mind. But in almost every community there are at least two pieces of water infrastructure that are highly visible on the landscape—water towers and windmills.

The earliest municipal water systems in the U.S. were primitive, often relying on natural springs and hollow log pipes, but the Industrial Revolution saw Americans’ demands for water grow exponentially. By providing both water storage capacity while pressurizing the entire distribution system, elevated water towers solved important reliability and functionality problems for civil engineers. Instead of relying on massive pumps running constantly to supply the entire system, smaller pumps could drive water into the tank when needed and the steady force of gravity could take it from there.

Some of the earliest tanks were essentially large wooden barrels installed on rooftops to provide water to individual buildings. As needs continued to swell, cities began to install their own municipal water towers—often steel tanks hoisted into the air on spindly legs, or later, all-in-one “monopod” towers that contained the structural supports, pumps, distribution pipes, and service needs within a single metal or concrete housing.

Not wanting to waste what is frequently the tallest and most visible real estate in town, water towers are often decorated for civic pride or advertising, with many becoming iconic landmarks in their own right. Some of our favorites include:

Of course, there are countless other water towers across the state notable for their artistry, such as those in Luling (home of the annual Watermelon Thump), Poteet (which hosts the Strawberry Festival each year), or the leaning water tower of Groom. 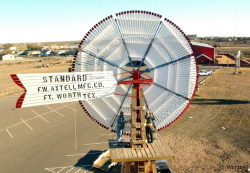 But without a steady supply of fresh water, water towers and distribution systems would do consumers no good. In urban areas, this might necessitate a gas or electric motor to pump water from its source, but in rural areas the more common solution is to use a windmill, which uses the natural energy of the wind to drive a piston, pumping ground water up to the surface. Areas like the Panhandle were forever changed by this simple invention, which provided access to the vast underground water resources of the Ogallala Aquifer and alllowed for more intensive agricultural use of the land than ever before. Since its invention in 1854, these self-governing windmills or windpumps have become a fixture on the American landscape.

Some of the ways you can learn more about the subject are by joining fellow windmill enthusiasts, or molinologists, by visiting the American Wind Power Center in Lubbock, the J.B. Buchanan Windmill Park in Spearman, or the Dutch Windmill Museum in Nederland. You can also subscribe to the Windmillers’ Gazette, a quarterly publication on the history of windmills and wind power.

How is local pride displayed on your hometown water tower? Have any photographs of classic Texas agricultural scenes featuring windmills? Share some of your favorites with us and the Texas Water Development Board on Instagram. Tag your photos #TXWindmills and #TXwatertowers during July 2016 for a chance to win a prize. Learn more here.