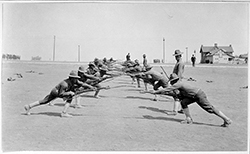 Just one month after his inauguration, on April 6,1917, the United States would find itself joining the “Great War” that had been raging since 1914. It had already brought powerful empires to their knees.

Texas experienced its fair share of the war’s effects. Nearly 200,000 men served in the military, with thousands more laboring on the home front in agriculture, shipbuilding, and timber. City populations swelled: Beaumont doubled and Port Arthur tripled in size by the end of the decade, while places like San Antonio and Fort Worth cemented their status as nationally important centers of aviation. Social change permeated many aspects of the Lone Star State, most notably in the form of women’s suffrage and alcohol prohibition—the winds of war would help bring about both.

By its end in 1918, the “war that will end war,” as author H.G. Wells famously put it, would transform the world. It unleashed industrialized warfare on an unprecedented scale, killed and wounded millions, weakened or destroyed global powers, and forced the United States further into political isolationism.

Like all the combatant nations, America did not emerge unscathed. In a short amount of time, 4.7 million American men were mobilized, from a peacetime standing military of 100,000. Over 116,000 would die in the conflict—a further 200,000 were wounded.

On the home front, the Espionage and Sedition Acts of 1917 and 1918 criminalized anti-war dissent and made life difficult for Americans with complicated—or downright hostile—feelings about their country’s involvement in what some thought of as a “rich man’s war, poor man’s fight.” Wilson’s appeal to make the “world safe for democracy” was questioned by the millions of Americans who continued to be afforded little or no democracy, especially in the Jim Crow South.

In many ways, the First World War is a forgotten war. A 2014 YouGov poll revealed that while three quarters of Americans believe the history of World War I is relevant today, only half can correctly identify when it began, and only a little over a third know when the U.S. entered it.

The Texas Historical Commission (THC) seeks to change that. Designated by Governor Abbott in 2016 as the lead state agency to commemorate the centennial of America’s entry into the war, the THC's Military Sites Program will spend the next two years highlighting the stories of everyday Texans, both at home and abroad, who brought change to the world—and were in turn forever changed by their wartime experiences.

View this map to see how World War I impacted all corners of Texas and where you can experience this legacy today. From exhibits to monuments to archives, resources related to the Great War provide information about local and statewide contributions.

I am trying to set up speakers for the Lockheed Martin Association of Retirees for next year and your WW1 subjects would be quite interesting to our group. If you do have speakers available we meet right near the main gate to the LM plant, Clifford and Lockheed Blvd, at noon and the following 2018 dates are available:
Feb 20, Mar 20, Apr 17, Sep 18, Nov 20.
Hopefully this can work out as you have a very interesting subject.