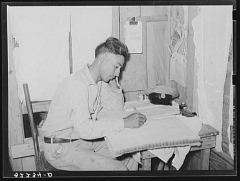 From the 1940s to the 1960s, the Robstown Migrant Labor Camp in Nueces County served as a centerpiece of Hispanic migrant labor communities in one of the most productive cotton-producing regions in the nation. The camp consisted of apartments and houses that could hold as many as 1,200 people, as well as showers, laundry facilities, a medical and dental clinic, and a community hall that was used by both the workers living at the camp and permanent Hispanic residents of Robstown. Significantly, the camp was a space in which otherwise transient farm workers lived in a large communal configuration and forged community ties. They came together around music, recreation, courtship, and other activities and institutions at the camp. In its later history, the camp housed flood victims, became a site of LULAC activism, and hosted a Great Society "War on Poverty" program. 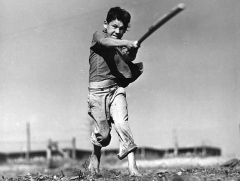 Members of the Nueces County Historical Commission (CHC) and professors at Del Mar College are in the process of documenting the farm workers’ stories as part of an oral history project.  One man who lived at the camp as a small child recalled it being a place in which young children played, killed snakes, chased dogs, and watched movies projected on a bed sheet, and that the drainage ditches surrounding the camp were like moats from a “medieval castle.” He also recalled how the adults and older children contended with cramped quarters, and noted that African American residents were segregated from others, and had to stay in small metal Quonset huts. 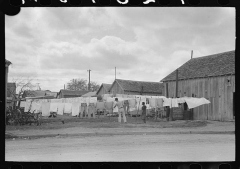 The Robstown Migrant Labor Camp is one of the topics selected this year as 2013 Undertold Markers. In addition to our regular Historical Markers Program, the Texas Historical Commission (THC) also administers the Undertold Program, or Marker Application Fund Program. In 2006, the Sunset Review Committee and the Historical Marker Task Force recommended that the marker program establish an application fee for all markers. This $100 fee is put into an account that the THC uses to pay for markers that address gaps in the program. Undertold markers are intended to promote a diversity of topics and proactively document significant undertold or untold stories. For example, science and sports themes are greatly underrepresented in the marker program as well as certain geographic locations. 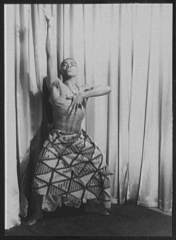 Another example of an underrepresented theme in the marker program is the arts, which is why Bell County's 2013 Undertold application for Alvin Ailey was particularly interesting. Ailey was born in Rogers, Texas, in 1931 and became an internationally known dancer and choreographer. He won numerous awards, including the National Medal of the Arts and Kennedy Center Honors, and established in New York City the Alvin Ailey American Dance Theater in 1958 and the Ailey School in 1969. Ailey drew inspiration from church services he attended growing up and from music at the local dance hall. Over the course of his long career, he choreographed nearly 80 ballets. Ailey continues to be an important figure in the arts through his ballets and organizations.

Applications for this important program are accepted every spring, typically from May 1 to June 15. The application itself is less comprehensive than the normal marker application and requires only 250 words about the topic and a few suggested sources. THC staff score the applications and then form an interdisciplinary team to select the topics. Typically, the THC funds 10–17 topics. Funded topics receive a free 27” x 42” historical marker or the equivalent in historical research. Since 2008, we have funded more than 90 markers with this program.

This year, we selected 14 topics and three alternates:

Once the topics are selected, marker staff contacts the applicant and the CHC to discuss the development of the narrative history. Similar to the regular marker program, the Undertold markers also require a five-page narrative history. This narrative is not required at the time of the application but is needed before the marker text is written. At times, this point of the process can take months or even years, depending on the CHC and local involvement, as well as the availability of sources. The applications that already have a narrative history prepared are manufactured much quicker than others and can be dedicated within the year.

I really enjoyed reading all the THC blogs listed on the website. I learned more about new projects and recalled many friends I have worked with during my association with the THC. Congratulations on posting such terrific topics! Sally S. Victor

Thanks, Sally--we really appreciate it! Feel free to sign up for our email subscription if you'd like to receive new blog posts in your inbox after they're published: http://bit.ly/Hh7fyE.