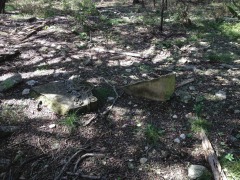 Sometimes, a routine phone call about a Historic Texas Cemetery (HTC) designation can lead to spectacular discoveries and unexpected insights.

Juárez’s oral history research indicated an important Mexican American cemetery was missing from the Hays County records. After consulting with Hays County Historical Commission (CHC) Chairman Jim Cullen, they decided to investigate a site that was plotted on a county map, but had not been documented because it reportedly contained only a few stones and rotting crosses. Juárez and Cullen were rewarded with unanticipated findings such as crosses with rare decorative metal tips, wood and metal plot fences, several headstones, numerous rock cairns, and personal offerings from bygone days.

McWilliams later met Juárez at the cemetery along with Amy Benton, collection manager for TSU’s Center for Archeological Studies, and Rebecca Swaim, a TSU student. Juárez had previously made numerous visits to the site, and received early permission from the landowner, a state requirement when accessing a cemetery via private property.

“Without this permission, significant historic and cultural information would be lost,” McWilliams says. “Texas landowners should be commended for cooperating with researchers to record historic cemeteries.”

She adds that the Hays County site visit took the research team along a faint path through interspersed cedar trees, up a steep hill, and to a slight swale, where signs of a forgotten cemetery began to appear. First, they saw a piece of barbed wire embedded in a tree, leading to a broken fence line. Soon afterward, they observed a hand-carved limestone cross toppled into an animal burrow, a patch of non-native agaves, and intermittent lines of rectangular rock piles identified as burial cairns.

“Through the patchy cedars, we could see wooden and metal decorative plot fences, standing and fallen,” McWilliams recalls. “Even the untrained eye could recognize that these were out of place. This was definitely a forgotten cemetery.”

Juárez’s accompanying visitors have consistently expressed excitement as they reached more populated portions of the cemetery, where they witnessed vessels that once contained offerings (including tin containers and a porcelain teapot), wire from flower wreaths, and bright green and solarized glass vases.

Juárez pointed out a metal-tipped cross at the end of a wooden picket plot fence and another at the head of a rock cairn. Additional pieces of metal tipping were found on the ground beneath the crooked crosses. Simple wooden crosses were the most common type of grave marker.

“Many of these crosses had fallen over, allowing weathering and decay to accelerate—these are the graves that will be lost very soon,” McWilliams explains. “The only legible names were traditionally Hispanic names, but some of the legible inscriptions were in both English and Spanish.”

Juárez’s research indicates the cemetery was affiliated with a local cotton plantation dating to the 1850s that originally used enslaved labor. After the Civil War, cotton farmers recruited Mexican citizens to replace the slaves. Juárez says the cemetery’s cairn-style burials could be a practical solution to a rocky burial ground; however, she has also uncovered historical evidence that may link them to mestizo or indigenous groups from West Texas or Northern Mexico. 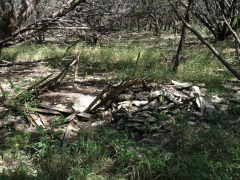 As an anthropologist, Juárez looks at the cemetery from as many angles as possible to study the community’s culture. Historic research from the surrounding 19th-century community showed an early Anglo Methodist church in the vicinity. The earliest Hispanic church was the Hispanic Methodist Church, established in the 1870s; a Catholic church was not established until the mid-1880s.

“It’s possible this relationship affected the incorporation of English, and this could potentially indicate the community was less segregated or had more class-based diversity during this period,” Juárez explains.

McWilliams adds that these types of significant cultural findings typically begin with Texans working at the grass-roots level. When curiosity leads to discovery, a simple phone call to the THC or a local CHC can result in far-reaching historical impacts.

“Dr. Juárez’s efforts have helped save this cemetery,” McWilliams says. “We had a dot on a map to mark the location, but now there’s so much more that can be learned and tied in to the cultural landscape.”

McWilliams says once a lost cemetery is rediscovered, an initial response is to reverse the years of neglect by immediately clearing and cleaning it. Though this is a natural reaction, well-meaning caretakers should consider what might be lost by these actions. For example, McWilliams says much of a cemetery’s vegetation is cultural, and removing it results in a critical loss of information.

“In Hays County, the density of the natural vegetation would result in massive dragging and piling, which would destroy some of the ephemeral evidence such as remains of wooden crosses,” McWilliams explains, adding that Juárez immediately consulted a local expert on native flora (in this case, Linda Keese).

McWilliams recommends mapping as a top priority. She says the map does not need to be created with modern technology; in fact, pencil and paper maps allow researchers to include detailed notes and visual descriptions. Each visit to the site provides researchers with a new view of the cemetery, including vegetative changes in different seasons.

McWilliams adds that an increasing threat to Texas cemeteries is modern encroachment and development. As highways, shopping malls, and housing developments are built, historians and archeologists are often required to address the disturbed and undisturbed remains.

To help determine if nearby cemeteries may be threatened, look for potentially neglected locations
on the THC’s Historic Sites Atlas.

“Our estimates show that we have tens of thousands of cemeteries to find,” McWilliams says. “Texans can help with this research by conducting oral histories, consulting archival records like historic maps and military documents, and hiring archeologists to conduct surveys. The sooner this work is done, the less history we will lose.”

We have something interesting here that we need guidance to unravel.

Thanks for your comment, Phyllis. Our Cemetery Preservation Program Coordinator is trying to reach you via email. If you'd like to contact her, please do so at Jenny.McWilliams@thc.texas.gov or 512.475.4506.