Downtown San Augustine—Main Street of the Texas Republic. That’s how we branded our program as soon as we became an official Texas Main Street city. We are located on El Camino Real de los Tejas National Historic Trail. San Augustine was founded in 1833, when settlers organized the earliest and oldest American town in Texas. With that heritage comes the proud ownership of many “Texas firsts” such as the establishment of the first university, home of the first governor, first churches... The list goes on.

Many of the activities and projects during our first year in the Main Street program have already had a positive impact on San Augustine. Our goal is to become a destination city, while focusing on revitalization and preservation of the historic downtown district. Our stakeholders are anticipating a sustainable program with a bright future.

Organizing and laying the foundation for the program has been the major focus during the past 12 months. Becoming a Texas Main Street city has presented us with the challenge to work with the community in all areas of the Main Street Four Point Approach®. In one year we have been able to see how the method works. It has proven to be successful.

Here are some of our happenings over the past year:

• I was hired as the Main Street manager, and the Advisory Board of 11 volunteer members was established.

• Texas First Lady Anita Perry visited to welcome us into the program. The event was held in our restored courthouse. 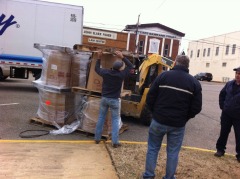 • We established work plans for all four committees.

• We created the brochure, “What is Main Street.”

• We purchased a screen and held the Main Street Halloween Spooktacular Movie Under the Stars event.

• We celebrated San Augustine's 180th birthday for our first fundraiser event, raising about $9,000. 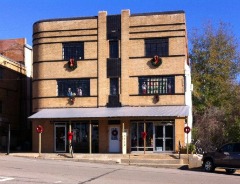 • We were awarded a Texas Downtown Association/Anice Read Fund grant for $800 that helped us achieve a first-year program goal and allowed us to purchase eight trash receptacles for downtown sidewalks.

• We submitted 11 design requests to the Texas Main Street Program, received recommendations back and contacted businesses. Several businesses have already begun to use suggestions from the state office.

So thrilled to be the one selected to do a magazine for the downtown area and the Heritage Festival of San Augustine! I hope to be so honored again in doing one for the Sassfras Festival ... Enjoyed my visits back 'to my home town' in the process and working with Tracy Cox was a big help...she knows her town and is so proud to be a part of the Main Street Program...keep up the good work Tracy