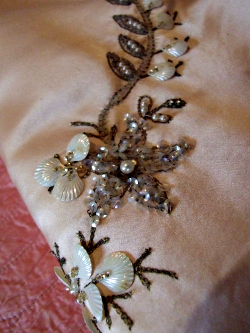 As a single man with no children, Sam Rayburn came to rely heavily on his sisters during the many formal social events that were an important aspect of his political life. Dinners, luncheons, and receptions in Washington, D.C. were all occasions when “Mr. Sam” often escorted one of his sisters.

Sam Rayburn’s unmarried sister, Lucinda Rayburn, was his primary hostess and social companion at home in Bonham and in Washington, D.C. When Lucinda (or “Miss Lou” as she was commonly known) died in 1956, the job of hostess fell to surviving Rayburn sisters Medibel Bartley and Kate Thomas. Their job was to act as the social companion to brother Sam and host parties or receptions on behalf of Speaker Rayburn.

Kate (Rayburn) Thomas was the oldest of the Rayburn sisters. She was born in Tennessee in 1872. Like the rest of her siblings, she moved from Tennessee to Flag Springs, near Bonham, in 1887. She married W.A. Thomas in 1899 and they lived in Dallas.

Medibel (Rayburn) Bartley was born in 1879. She married Samuel Edward (S.E.) Bartley in 1902. They initially lived in nearby Ladonia, but later relocated to Dallas and then back to Bonham. They moved in to the Rayburn home around 1943.

Following Lucinda’s death in 1956, Medibel greeted visitors to the Rayburn home and often visited Washington, D.C. with Sam to accompany him to social functions. Several photos from the Sam Rayburn Museum collection at the Dolph Briscoe Center for American History show Medibel and Sam engaging with fellow politicians and others at special events in Washington, D.C.

For these formal occasions, women were expected to wear the appropriate attire. For state dinners or formal balls such as an inaugural ball, Medibel needed to keep a fine gown or two in her closet. Today, the Sam Rayburn House collection includes three formal women’s gowns; one for each of the Rayburn sisters. One is pale lavender with sequins and a tulle skirt that belonged to Lucinda. A second dress is a dark lavender color with long lace sleeves that belonged to Kate. The third gown is cotton candy-colored pink satin with spaghetti straps, beading, and sequins along the edge of the skirt and a tulle underlay. This gown belonged to Medibel. 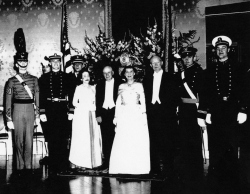 A photo in the Sam Rayburn Museum collection leads us to believe Medibel wore this dress in 1959 to a ball at the White House when she was 80 years old. She was photographed with her brother Sam Rayburn, President Dwight D. Eisenhower, and First Lady Mamie Eisenhower.

The label on the interior of the dress reads, “Helena Barbieri ORIGINAL.” Helena Barbieri was a New York fashion designer known for her chic formal gowns and cocktail dresses during the 1940s, 1950s, and in to the 1960s. Medibel may have purchased the gown at the Neiman Marcus store in Dallas. Medibel’s gown would have been an appropriate choice for the Washington, D.C. social scene, with opera length gloves, a fur stole, and silver pumps.

Medibel’s dress was on display during our Women’s History Month open house at the Sam Rayburn House State Historic Site on March 4. The event honored Sam Rayburn’s sisters and included themed tours of the house.

In the 1950s I lived with my Aunt and Uncle at Reno, Texas. I worked in the hay fields around Bonham and Paris during the summers. I worked for John Scarbourough who owned the Ford tractor dealership in Paris and Bonham. He also owned a huge orchard between Paris and Bonham. My Aunt and Uncle raised rabbits and game birds and were involved in the various associated activities. I remember seeing Mr. Sam many times. In those days famous people were just ordinary folks when at home.