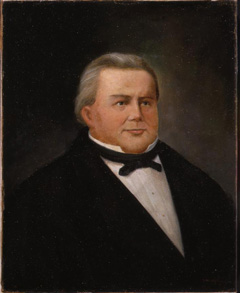 San Felipe de Austin, the capital of Stephen F. Austin’s colony in Mexican Texas, was the site of many business endeavors during its brief existence. Recent archeological and historical research is providing new insights into this aspect of the town’s history. Today’s post is brought to you by the letter “K.”

A particular business of interest in colonial San Felipe is the early printing office operated by Godwin Brown Cotten. Historical sources have offered clues to the location of Cotten’s establishment, but the specific site of his shop remained unknown until this summer.

Cotten arrived in Texas in August of 1829 and he launched his newspaper, the Texas Gazette, the next month. Various historical accounts have placed the “Cotten Plant,” as the shop was facetiously known, in the “east end” of the town of San Felipe near the Commerce Square. This is the same area of the colonial town site that has been designated as the San Felipe de Austin State Historic Site. Historic accounts generally place the print shop near the Farmer’s Hotel, which was located on a lot that is within the boundaries of the current historic site. 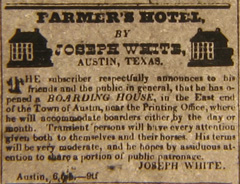 At this location, Cotten produced an (almost) weekly newspaper to serve Austin’s Colony, and printed the first book published in Texas, Stephen F. Austin’s Translation of the Laws, Orders, and Contracts, on Colonization. The 72-page, pamphlet-style book was completed in early 1830 (though the cover ambitiously notes a publication date of November 1829). 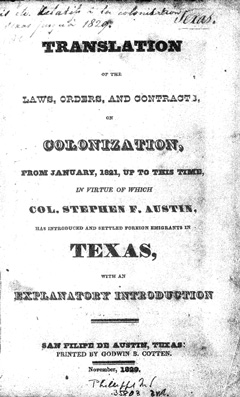 In February 1830, immediately after printing Austin’s book, the print shop is believed to have moved to a new location within the colonial capital. On February 27 of that year, J.W. Mayo announced the opening of his store in “the house recently occupied by G.B. Cotten, as a Printing Office.” In addition, the proprietor of the Farmer’s Hotel changed the wording of his newspaper ads in March, dropping the previous reference to the hotel being near the Printing Office. Cotten and his business partner, Robert M. Williamson, had acquired two lots south of Commerce Square (on acreage recently purchased by the Texas Historical Commission as part of development planning for the historic site). It has been theorized—but not substantiated—that the print shop moved to one of these lots in early 1830.

Recent archeological investigations on lands surrounding the state historic site (including portions of the recently acquired land) offer exciting new evidence about the print shop’s locations. A consortium of area preservation partners and the THC sponsored this archeological project, which was overseen by archeologist Marianne Marek who served as the principal investigator. Marek’s project report, completed in 2012, brought together the data compiled during more than a decade of research, investigation, and analysis.

Among the unidentified small objects photographed for her report, historian and printing history researcher Michael Moore noted what appeared to be lead type from the handpress printing era. Cotten’s publications would have been set by hand, letter-by-letter. Upon closer examination of the lead piece, it is indeed a letter “K” from a font that was a favorite of Cotten’s. The font is described as Great Primer (18 Point) Shaded, and the specific letter is a small capital from this font. 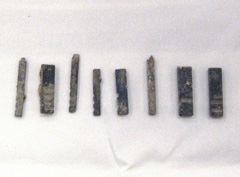 The “shaded” aspect of the font produces an interesting effect—essentially, the type piece imprints a letter with sharp, darkened exterior lines and with open (white space) body sections. The lot that produced this letter “K” is indeed very near the location of the Farmer’s Hotel.

In addition, Marek’s report noted similar unidentified pieces on one of the lots acquired by Cotten and Williamson, now part of the developing historic site. Moore speculated that these could also be type pieces. Upon closer review, eight lead printing artifacts have been identified from this lot: three tiny pieces of type in Bourgeois font (one letter a capital “O” and the other two undetermined) and five spacer pieces of various sizes. During the handpress era, spacers of all sizes were used in the challenging task of right-justifying blocks of text to prepare them for page layout. This discovery seems to confirm the second location of the Cotten print shop at San Felipe. 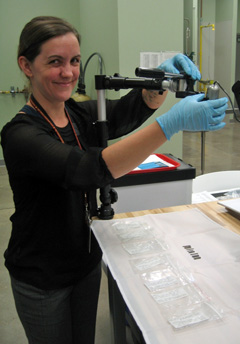 So the lesson brought to you today by the letter “K” is how archeological and historical research can facilitate our broader understanding of the past. The archeological discovery of small metal artifacts is not always noteworthy (or even obvious as to what such artifacts may be). The historical evidence regarding the location of the Cotten print shop was too vague to allow interpretation of a specific site. Combining the insights from these two fields provides a compelling opportunity for San Felipe de Austin State Historic Site to share the stories of some of the earliest Texas imprints. G.B. Cotten, a noted and passionate storyteller, would no doubt love the idea that this story can now be told.

Bryan,
If I am not mistaken, Godwin Brown Cotton came to Texas in 1812 with Jose Toledo and he was the printer for the first news paper published in Nacogdoches, Texas. These men were involved in the Gutierrez-Magee Expedition and the news paper was to encourage a better welcome for these rebels who came to free Texas from Spain.

Thank you for your comments about Cotten and the Gutiérrez-Magee expedition. The historical and political complexities of this filibuster continue to confound many historians to this day. You are correct that Cotten seems to have been a participant in the affair. However, despite many efforts to link his later printing acclaim to the brief printing history related to the expedition, it seems more likely that Cotten was a military, not political/printing, participant. Even more confusing, the Spanish-language newspaper, Gaceta de Texas, published under the direction of José Álvarez de Toledo y Dubois was printed in Natchitoches, Louisiana (though it listed Nacogdoches as its place of publication). In fact, it is unclear whether this paper about regional affairs and intended for residents of Texas was even widely distributed in Texas.

Cotten is rightly noted as one of the earliest operators of a printing establishment in Texas. His Texas Gazette newspaper, serving Austin’s Colony, was first printed in September of 1829, just a few weeks behind the Mexican Advocate printed in Nacogdoches.

For more information, you might review Handbook of Texas online postings on Gutiérrez-Magee Expedition, Gaceta de Texas, Newspapers, Jose Alvarez de Toledo y Dubois and several internal links related to the respective players in this story. Again, thanks for your interest in our piece. Feel free to contact me directly with any additional comments or questions (bryan.mcauley@thc.texas.gov).