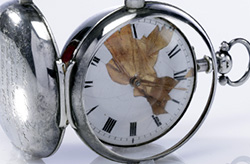 This short film uses 360-degree video technology to give fans of Texas history a new way to study and understand the Goliad Massacre. Move your phone or drag your mouse to see every detail, including new information and video footage of artifacts, the role of Col. James W. Fannin, and the Battle of Coleto Creek. Watch it again to see any trivia you missed!

Some web web browsers do not support 360° video at this time. If you experience playback issues on your iPhone or iPad, watch it using the YouTube app.

360-degree video filmed within and around the Presidio La Bahía and Fannin Battleground State Historic Site is intended to help viewers gain a deeper understanding of the tragic story that played an important role in the 1836 march toward Texas independence. The short film is now available at thc.texas.gov/goliad-massacre.

At sunrise on Palm Sunday, March 27, 1836, the Mexican army marched most of a captured Texian army in three groups from the Presidio La Bahía near Goliad. Within a short distance, the Mexicans opened fire on the weaponless soldiers and executed 342, of which 40 were too wounded to march. Twenty-eight men escaped, and an additional 30 with special skills were spared. Inside the walls of the Presidio, the wounded Texian commander, Col. James W. Fannin was executed at point blank range. The massacre occurred only three weeks after the Battle of the Alamo and roughly four weeks before the decisive Battle of San Jacinto.

The THC has been the state agency for historic preservation for more than 60 years. The Friends of the Texas Historical Commission develops private resources to assist the THC with its mission. 900 lbs of Creative of Dallas provided film production and creative and design services. Gravelle Branding/Marketing of Dallas provided overall direction and strategic services. Stephen L. Hardin, Ph.D. Of Tarleton State University served as historian.