Amarillo’s heritage contains a surprisingly eclectic mix of cultural influences, from Native American leaders to legendary ranchers to the Americana of Route 66.

The city’s population surged in the late 1800s, when windmill-powered agricultural wells reached the deep water table, the railroad arrived, and thousands of nearby cattle were corralled and shipped to meatpacking centers in the north.

By the 1930s, cross-country automobile travel shifted into high gear thanks to new highways like the famous Route 66. The city’s distinctive blend of fiery, friendly folks endeared many travelers to its independent pioneer spirit. 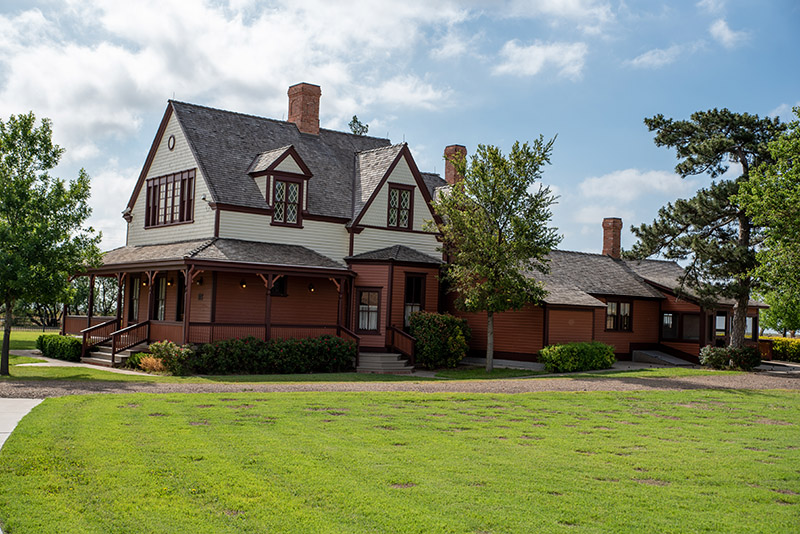 Located 40 miles east of the city is the Texas Historical Commission’s newest property, the Charles and Mary Ann Goodnight Ranch State Historic Site. The legendary rancher’s “Castle on the Prairie,” a charming 1887 home that served as Goodnight’s command center for the Panhandle’s first cattle ranch, is unlike any other cultural destination in the region. The Goodnight Ranch is a testament to the Goodnights’ influence. Molly helped save the last of the southern herd of American Bison by starting with two heifers and a bull calf. Charles had a lifelong connection with famed Quahada Comanche Chief Quanah Parker, who often visited the home to discuss ranching over supper. 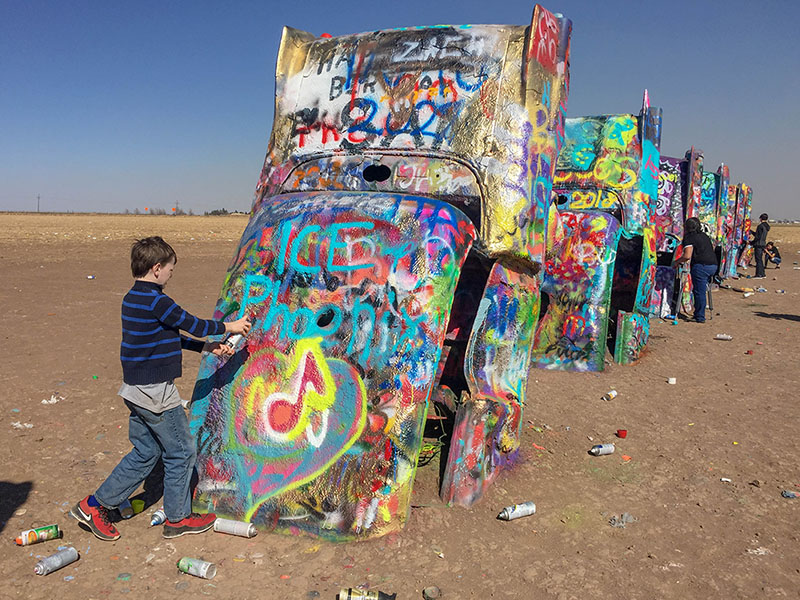 Among Amarillo’s most-photographed travel destinations is Cadillac Ranch, a permanent art installation of 10 historic Cadillacs buried nose-down in a field west of town. Representing the golden age of American automobiles on the Mother Road, the cars were reportedly positioned at the same angle as the pyramids in Egypt. Now they’re covered with thick layers of graffiti—feel free to leave your mark.

The 1932 Potter County Courthouse in downtown Amarillo is an eight-story structure designed in the “Pueblo Deco” style, combining geometric ornamentation and design features from the Art Deco and Pueblo Revival movements. The building was restored in 2012 with assistance from the THC’s Texas Historic Courthouse Preservation Program.

Among the many beautiful historic buildings in downtown Amarillo, the National Register-listed Harrington House stands out. Although temporarily closed due to COVID-19, visitors can glimpse the opulence associated with the region's famed ranching and oil and gas industries. Built in 1914 by cattlemen brothers John and Pat Landergin, the Classical Revival mansion was purchased and preserved in 1940 by oil tycoon and philanthropists Don and Sybil Harrington.

Horses are also serious business in cowboy country, and this is abundantly apparent at Amarillo’s American Quarter Horse Heritage Center & Museum (temporarily closed due to COVID-19). This enormous and captivating museum showcases the history of the country’s most popular horse breed, revered for its performance in rodeos and skills on the ranch.

Another fascinating cultural institution is the Kwahadi Museum of the American Indian, which is housed in a replica Pueblo Indian kiva (underground ceremonial chamber). The museum features fine art, artifacts, and exhibits on the crafts and cultures of the Pueblo and Plains Indians, as well as performance areas for the Kwahadi Dancers. 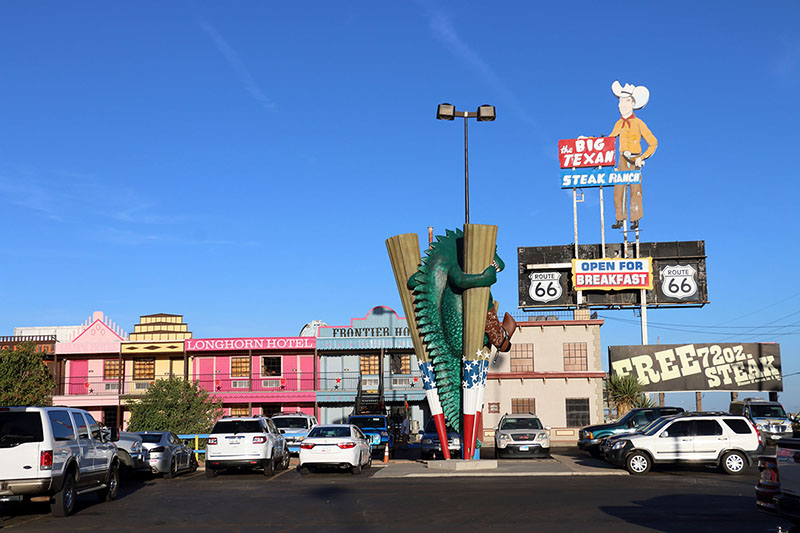 The Big Texan is a legendary roadside Americana restaurant worth visiting, even if you don’t plan to eat the 72-ounce steak (free of charge if you can devour the entire slab of meat and side dishes). It’s an extra-large challenge befitting of the restaurant’s name. The Big Texan opened in the 1960s on Route 66 before moving to its current higher-profile location.

If you’re downtown (even if you aren’t) and craving a good Mexican meal, head to Acapulco. Although Amarillo is half a continent away from Acapulco, this restaurant offers authentically flavorful food in a lively urban atmosphere. The margaritas and mojitos are a good way to start, and the beef tacos and chile rellenos will transport you south of the border.

One of Amarillo’s legendary steakhouses is the Stockyard Cafe. Located adjacent to the livestock auction warehouse, the cafe’s diner-style booths are packed with hungry farmers and truckers enjoying heaping helpings of steak and eggs, flapjacks, and steaming mugs of bland coffee.

For those in search of more contemporary fare in a historic downtown building, head to Crush, featuring a refreshingly modern alternative to the city’s traditional steak houses and chicken shacks. The beer and wine options are diverse and local, and the cuisine is a notch above expectations. Try the pork chop with poblano cream sauce and seasoned veggies.

Get your jolt of caffeine at Palace Coffee Company, a downtown fixture that's also housed in a historic building. While that location is temporarily closed due to COVID-19, there's another in southwest Amarillo as well as an outpost on the courthouse square in Canyon.

The best lodging option in the historic business district is Courtyard Amarillo Downtown. Occupying the historic 1927 Fisk Building, the hotel’s rooms are stylish with modern flairs, and it’s within walking distance of several top-notch bars and restaurants.

The most famous historic bar in Amarillo is the 1946 Golden Light Cafe and Cantina. This unassuming spot on old Route 66—boasting an original sign that may have inspired the Hard Rock Café logo—stages live country and blues bands every weekend. Another venerable venue on the Mother Road is Cattleman’s Club, a classic country and western bar offering live music and cold beer.

Several pockets of America’s Main Street in Amarillo offer a time warp to the road’s busy heyday. One of the best is Texas Ivy Antiques, located in a quaint 1920s home. It’s also worth dropping by the legendary Nat Antiques for tasteful items and a glimpse of history, including a THC historical marker in front.

Canyon is the gateway to the stunning Palo Duro Canyon State Park. This Texas Main Street city offers travelers a place to fill up on food and cultural attractions—including a historic courthouse and several THC markers—before descending into the second-largest canyon in the country.

Perched on the upper rim of the canyon, the park’s visitors center is one of several park buildings constructed by the Civilian Conservation Corps (CCC) in the 1930s. It contains a museum with exhibits detailing the canyon’s geographic and cultural history, which includes being the setting of the final and decisive battle of the Red River War.

Hikers should make a point of exploring the Lighthouse Trail, a three-mile-long trek with mesmerizing views culminating with a close-up look at the namesake lighthouse formation. Cyclists also have several worthy options to choose from, most notably the Capitol Peak Mountain Biking Trail.

Lodging options in the park include CCC-constructed cabins, tent and RV sites, and new glamping sites. There are also several privately owned cabins and rental houses located on the canyon rim outside the boundaries of the state park. 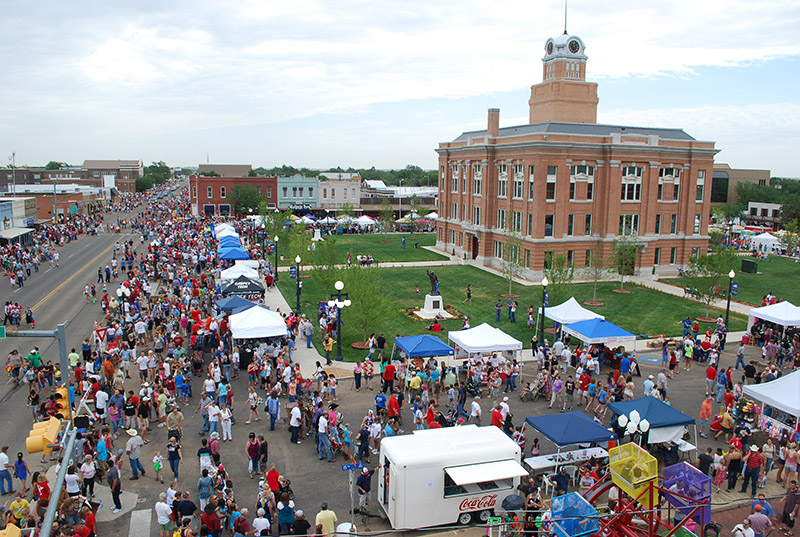 While in Canyon, make a point to visit the historic courthouse square, anchored by the Randall County Courthouse. The 1909 structure has faced impending destruction several times, but a group of concerned citizens, with assistance from the THC, helped fund the restoration and preservation of its exterior.

Just down the road is one of the best Instagram-ops in the state: the 47-foot tall Tex Randall statue. Originally constructed in 1959 of concrete, steel, and wire to promote a local Western wear store, the landmark was restored in 2016 after years of fundraising efforts from locals and Canyon Main Street.